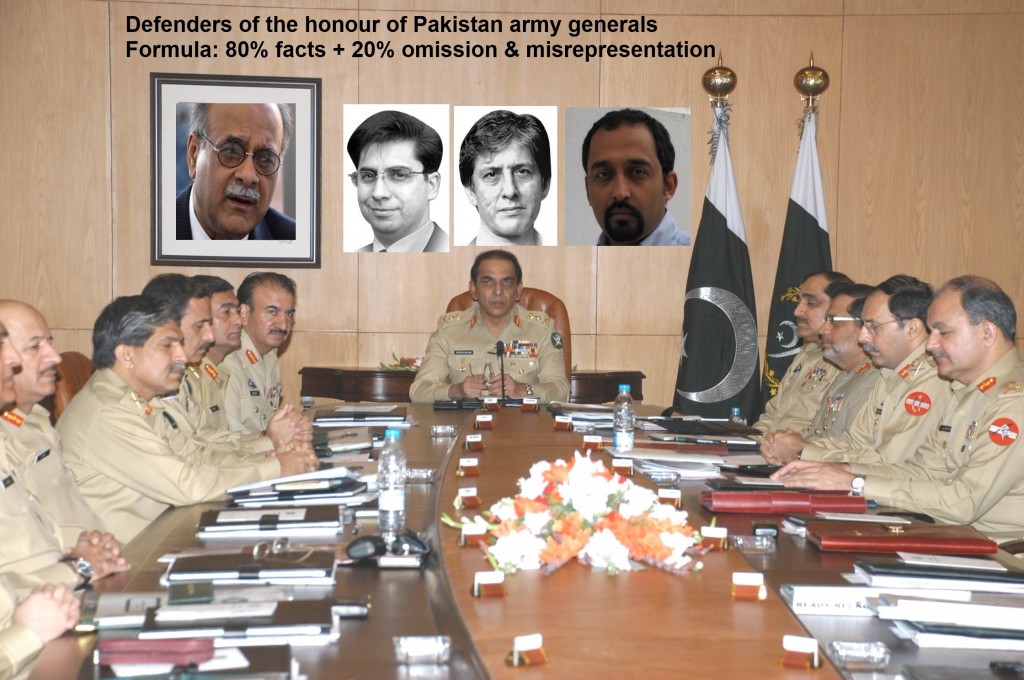 After reading the latest editions of The Express Tribune and The Friday Times – especially those written by Good Liberals like Feisal Naqvi’s “There Will Be Blood” and Najam Sethi’s current The Friday Times editorial “Terrorism and National Consensus”, I am assured that ISPR is in good hands.  As an avid Jamaati supporter of Sipah Sahaba Taliban (SST) I must commend both my Good Liberal Colleagues for their latest masterpieces of spin writing.

If Abdul Qadir or Shane Warne were as good at writing as they were at spin bowling, they would be lucky to be compared to  writers like Hazrat Najam Bin Al- Sethi – currently the best spokesman for the Pious Patriotic Puttar Fauj. Some silly Boffins and rogues at Aabpara might have misunderstood him.  I want to assure Pious Patriotic Puttar Fauj that Hazrat Al-Najam Bin Sethi is your most gifted and talented spokesperson. He is the Robin to your Batman, the Dr. Watson to your Sherlock Holmes, the Hazrat Amr bin Aas to your Caliph Muawiya bin Abu Sufyan.

I must commend these Good Liberals for refining and developing Jamaati tactics like Omissions, Deflections and Blaming-the-victim.

Starting with Feisal Naqvi, I must commend him on not mud slinging our Pious Patriotic Puttar fauj even once during his article – after all, the whole world knows that it is the Lyari O Larkana (LOL) brigade that is responsible for all the terrorism in Pakistan. LOL is lead by dictator Zardari. Similarly, the second most violent terrorist group in Pakistan are the Khudai Khidmatgar movement that was founded by savage Pathan and RAW agent, Bacha Khan and consists of Girl Student Militias armed to the teeth with secular education and the Roman alphabets!  It is now headed by Asfandyar Wali and here I must give credit to Pakistan’s Independent Corporate Media for blacking out Asfandyar’s anti-Taliban live press conference yesterday on Quaid Day.

Before proceeding any further, please take a pause to stand in solidarity with Sherry Rehman who was terrorized by the Septuagenarian wing of the LOL brigade in 2010 and her Taliban that her Jinnah Institute advocates in favour of.  https://lubpak.com/archives/28084 The Sipah Sahaba Taliban have been terrorized by girl students like Malala and Mehzar Zehra.

As I was saying, please commend Feisal Naqvi for not raising any fingers against the army and against the Supreme League of Justice Party (SLOP) – we all know that they are not responsible for any of the blood letting that is going on in Pakistan. A Good Liberal will never blame the Pious Patriotic Puttar Fauj the same way he curses elected PPP and ANP leaders.  This is a brilliant “Blame-the-victim” tactic that was revolutionized by Caliph Muawiya when he held Caliph Ali (KW) responsible for the death of Sahaba Ammar Bin Yasir in the war of Siffin to avenge the murder of Caliph Usman. You see, Sahaba Ammar Bin Yasir was on the side of Caliph Ali (KW), so Caliph Muawiya bin Abu Sufyan blamed Caliph Ali for Sahaba Ammar-e-Yasir’s death.

That is why, today, it is only correct if we blame PPP and ANP for getting killed by the Taliban.  We must never really blame Pious Patriotic Puttar Fauj for protecting our assets like Sipah Sahaba Taliban.  Some might call this a contradiction but us ghairatmands know that nothing succeeds like Blaming the Victim tactics and I am so pleased that Feisal Naqvi is resorting to this tactic.

Thank you Feisal for not criticizing Pak Fauj and for distancing yourself from Shias.

In his weekly masterpieces, unofficial ISPR Spin Meister, Hazrat Najam Bin Al-Sethi blames the politicians for not reaching a consensus against Taliban. This is a stroke of genius especially when Hazrat Al-Sethi was part of Jinnah Institute that supports Mullah Omar Shura and Haqqani network.  It is thanks to geniuses like Hazrat Al-Sethi that we have differences between Good Taliban and Bad Taliban and Afghan Taliban and Pappa Bear Taliban and Mamma Bear Taliban.

This way, whenever we want to protect our assets, we can always shift them to a safe category.  Ofcourse, many times during last 5 years, PPP and ANP leaders say bad and defiant things against the Taliban which is why some of them had to be rapped on the knuckles.  For instance, Sindhi Sorceress Benazir was against the Taliban from 1998 to 2007 when she died in a car accident as per Sethi’s friend, Musharaf.  From Kerry Lugar Bill to India Peace talks, PPP have strayed from GHQ script and because of that, they are stupid – something that Al-Sethi loves to point out in his masterpiece theater show called “Aapas Ki Baat” (translation Gossip amongst Friends

For shifting all the blame to elected politicians and deflecting criticism from Pious Puttar Patriotic Fauj and its Judicial proxies, I nominate Hazrat Najam Al-Sethi for President of the Good Liberal Club.  Like the Good Taliban, the Good Liberals are an asset for the underfunded and powerless Pak Fauj.  Hazrat Al-Sethi has a distinguished record. Who can forget his flight in a military helicopter in 1976 – just like Malik Ishaq’s flight in a military helicopter in 2009.

During the height of the Movement to Restore Dictatorship, it was comrade Sethi who took the brave stance of abusing Benazir in semi public gatherings. For that he was rewarded in General Karamat’s caretaker Shura headed by Good PPP Patriot, Farooq Leghari.

Today also, comrade Hazrat Najam Bin Al-Sethi is fighting the good fight and doing his best to ensure that blame only falls on elected politicians and NOT on our Pak Fauj. The jealous LUBP folks call this “intellectual dishonesty”, “obfuscation” blah, blah, blah.  I call it GHAIRAT.

Ps. If you are reading this Hazrat Al-Sethi, please give a raise to your employee and protégé Ali Chishti.  Sipah Sahaba Taliban owe him big time for his advocacy of Maulana Tahir Ashrafi and Maulana Ludhianvi, chief of ASWJ.  With Good Liberals like your team at the Friday Times and Jinnah Institute, the Pak Fauj and its brave Judicial Proxies will one day establish Caliphate ooops, Baghdad Model oops sorry, Bangladesh Model in Pakistan.  Quid Pro Quo, I will use my blossoming popularity to convince the rogue elements at Aabpara that you are really on their side. Unless ofcourse this is like the Noora Khushti going on between Generals and Judges on Balochistan issue to laundry and rebuild old assets. Then, wink, wink, nudge, nudge, I will play along.