……under clause (3) of Article 66 of the Constitution, the committee had powers vested in civil court under the Code of Civil Procedure 1908 (Act V of 1908) to enforce the attendance of any person and compel the production of documents.

Article 66 (3) of the Constitution reads: “Provision may be made by law for the punishment, by a House, of persons who refuse to give evidence or produce documents before a committee of the House when duly required by the chairman of the committee so to do. Source

In the typical manner of an Army general and/or a mass murdering Takfiri Jihadi, Pakistan’s Supreme Kangaroo Court once again thumbed its nose at the Constitutional mandate of the Public Accounts Committee. Contrary to the clear and unambiguous Constitution Clause quoted here, the Supreme Court registrar, Faqir Hussain, has refused to present the accounts of the Judiciary to the Public Accounts Committee.  The Supreme Court stands by this illegal act of its own registrar and has even allowed him to vent his defiance against accountability by supporting it through a media diktat.

The PCO (twice oath on Provisional Constitutional Order legalizing army coup), Supreme Court of Pakistan has once again made it clear, that like the military dictators Martial Law regimes whom it has serviced dutifully for decades, it considers itself above the Law.

In Pakistan, if one is the corrupt son of the present Supreme Court Chief Justice or a self-confessed mass murderer like Malik Ishaq, they one is not constrained by such petty things like the Law. The same applies to the Pro-Taliban Pakistan Muslim League which allegedly financed the reactionary, hypocritical and self-righteous Lawyer’s Movement.  The only group that can be convicted by this Supreme Court are popularly elected Prime Ministers belonging to the Pakistan People’s Party.

Unlike mass murdering Jihadists and their corrupt PML N sponsors like CJP’s cousin Rana Sanaullah, the PPP has always been in the cross-hairs of Pakistan’s corrupt and spineless Supreme Court. Prime Minister, Shaheed Zulfiqar Ali Bhutto was sent to the gallows in a Kangroo Court trial whose proceedings were dictated by General Zia ul Haq.  Another PPP prime minister, Yousuf Raza Gillani, was Un-Constitutionally removed from office for his refusal to go against the Constitution.

What else can one expect from this Jihadi Judiciary other than its Un-Constitutional stance that its Public Funding cannot be held accountable to the Public Accounts Committee, formed by elected representatives of Pakistan.  Will we see biased journalists like Umar Cheema insisting that financial records of this Judiciary also be made public just as his recently publised records of parliamentary members.

However, in Pakistan, the Corporate media acts more as a cheer leader for cranks, former generals like Hamid Gul and as the self-righteous supportors of PCO Chaudhry and his cohort of acquiescent PCO judges in both the Supreme Court and High Courts of the country.  The four main #CheerleadersForChaudhry are Najam Sethi, Umar Cheema, Hamid Mir and Ansar Abbasi.

The so-called “independant” media will typically fall in line with this judiciary  without regard to the principles of accountability and transparency and the Constitution.

The only brave soul who has done his best to expose this Judiciary’s double standards and hypocrisy as well as its sympathy with the terrorists of Sipah Sahaba Taliban, has been PPP Senator Faisal Raza Abidi.  In stark contrast to Senator Abidi’s bold and legally-grounded stance for Judicial accountability is the sneaky, bigotted and underhand remark of Fake liberal champion, Najam Sethi

@marvisirmed @AliDayan I wonder if any mediaperson has complained of being gagged by SC? But Faisal Raza Abidi is hopping mad.

Is Mr. Sethi pretending that the HRW report is fiction. It seems so as obviously Mr. Sethi has not been following the news or is deliberately being cheap with the truth. Let us refresh his memory from this detailed report in Express Tribune

Hassan further stated that HRW had been receiving reports of the curbs placed on local media by the judiciary for a long time. However, it was the recent wave of orders by the Lahore and Islamabad High Court seeking to restrict the media’s freedom of expression, which brought the issue into the limelight [See background below].

Being deliberately obtuse, having the gift of the gab to equivocate on demand and getting away with outright intellectual dishonesty makes Mr. Sethi an invaluable mouthpiece for the civil (judiciary)- military establishment.  To channel Mr. Sethi, it might just be the “rogue elements” in ISI who allegedly consider Najam Sethi as “anti-establishment“.

After all, Mr. Sethi and his lackey have made a career at GEO in presenting half-truths to selectively slam the elected government while allowing for mild and token criticism of the Military-Judiciary establishment. Mr. Sethi is one of the most talented henchman of the Establishment and should be left alone and unharmed by the “rogue elements” within ISI. Unless ofcourse the alleged threats against him are a publicity exercise to launder his image.  If rogue elements within the ISI do consider him as “anti-establishment”, please do not do so – he is one of your most gifted propagandist.

Najam Sethi in his writings and his glorified gossip show feverishly promotes the comic notion that this Judiciary holds the rule of Law dear. At the same time, and similar to Hamid Mir and Ansar Abbasi, he is almost the PCO judges to continue to undermine the elected Government by hook or by crook.

The refusal of the Supreme Court Registrar to present the Judiciary’s accounts to the Public Accounts Committee speaks volumes of what exactly the judiciary thinks of the Rule of Law or its much hyped quest to end corruption.  Charity begins at home unless one has the support of media to flout the law. 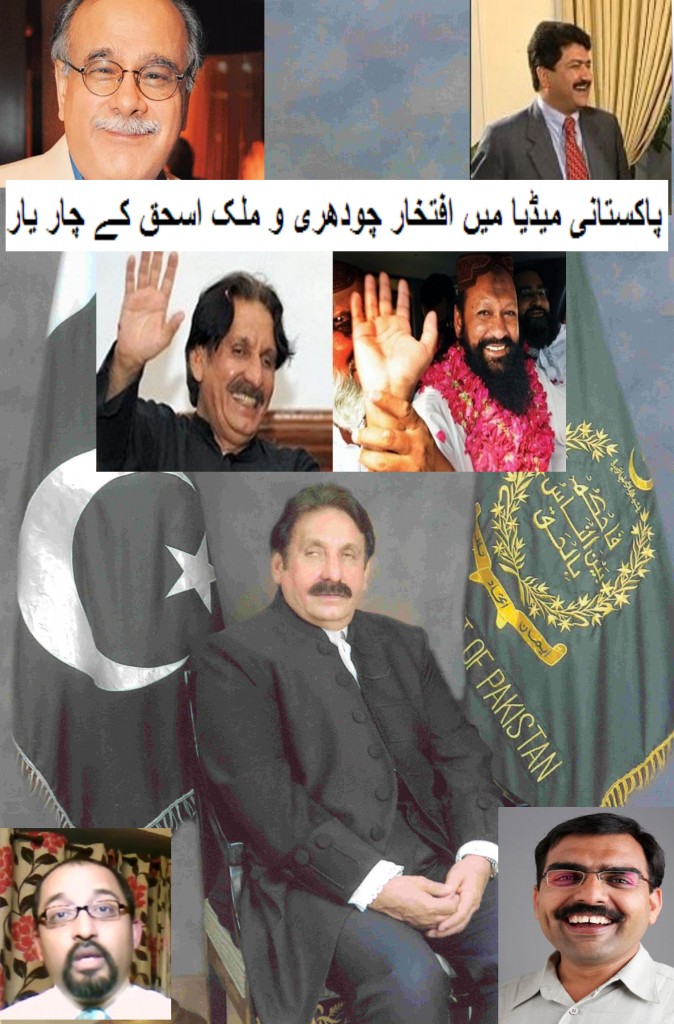