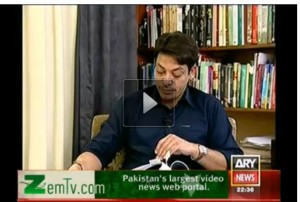 Senator Faisal Raza Abidi of the Pakistan Peoples Party has been an outspoken critic of the Judicial bias of the current PCO judges of the Supreme Court of Pakistan. He has consistently exposed the judicial bias in favour of Jihadi militant leaders like Malik Ishaq (leader of LeJ/ASWJ) and Hafiz Saeed (LeT/JuD).  For standing up to the Taliban and for speaking out against Shia Genocide in Pakistan, he has routinely been mocked, abused and jeered at by the Right-wing Islamist TV anchors and their preferred guests from PML N, PTI and Jamaat-e-Islami.

Similarly, Pakistan’s pseudo-liberal elite have also largely ignored his efforts in speaking out openly against the Taliban – after all, he is not a glib speaker from the MQM or a pretentious member of the chattering elite. He is warts and all, a passionate worker of the PPP.

Senator Abidi’s biggest sin has been to expose the massive corruption, cronyism and extremist tilt of Pakistan’s PCO Supreme Court judges.  He has painstakingly gathered the evidence and made his case against the Judiciary based on the Constitution and the Law.

After highlighting specific instances of how the Chief Justice self-admittedly took a massive loan from the House Building Finance Corporation to celebrate his corrupt son’s wedding, Pakistan’s so-called “independant” media was promptly gagged by Chaudhry’s henchman, the Chief Registrar of the Supreme Court.

Instead of taking a stand, the otherwise self-righteous and loud media buckled and did not provide Senator Abidi his Constitutional right to critisize Supreme Court judgements and point out the double standards and growing corruption allegations surrounding the Chief Justice and his corrupt son, Arsalan Iftikhar.

In his  interview on Soch Pakistan (ARY October 26, 2012), Senator Faisal Raza Abidi provided the legal and Constitutional basis for his valid criticism and exposure of the current PCO Chief Justice.  Ironically, the decision by the Islamabad High Court (by a Judge who was a Jamaat-e-Islami electoral candidate in 2002!)  to quell criticism of the Judiciary is in direct opposition to the Standard Operating Procedure laid out by Chaudhry Iftikhar himself!

The Interview can be watched in full here