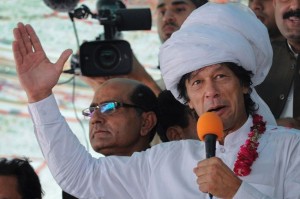 Imran Khan, head of Pakistan Tehreek-e-Insaf (PTI), wears a turban while addressing his supporters in Musa Khel, in the province of Punjab on Oct. 6, 2012. (SAAD ARSALAN/REUTERS)

In two recent articles, Imran Khan has been exposed as both a Taliban apologist and as a cowardly liar.  In the following article in the Toronto Sun, the reader gets to see another version of an important incident that has largely been obscured by our so-called “independent” corporate media of Pakistan

As Khan strutted towards the departure gates and approached U.S. Immigration, an officer asked him the customary questions about the purpose of his trip to the United States.

His answers were noted and he was given back his passport and told to proceed.  In the meantime, behind a one-way mirror overlooking the immigration booths, U.S. Homeland Security officials were tracking Khan’s movement, as they already knew he was going to enter the U.S. after his visit to Canada.  Instead of creating a scene at passport control, they allowed Khan and his entourage to board the aircraft and only when all the passengers were seated, did they go in and haul him back.

This time it wasn’t a young Pakistani student journalist asking the questions; it was no-nonsense officials of a U.S. and Canada task force, including representatives from Homeland Security.  An official who observed the interrogation process told me Khan sat timidly with his head lowered and hands clasped while he received a “dressing down” about potentially violating the limitations of his visitor’s visa to the U.S.

He said there was no talk about Khan’s opposition to U.S. attack drones, as the politician later claimed after the fact.  My source, tells me the real concern was that Khan had told passport control he was coming to the U.S. to visit family and friends, without specifying his planned fundraising and political activities.

(Deputy U.S. Ambassador to Pakistan, Richard Hoagland, later tweeted about the incident, as cited by Pakistan’s International News , saying Khan’s detention had: “Nothing to do with drones — he brought it up.”)

Stuck in detention, Khan requested help from the Pakistani government to intervene and calls were made to the U.S. State Department.  Khan was then asked to give assurances that he would not use his visa for political purposes, to which he promptly agreed and was allowed to go on his way.  Apparently, he’s not as tough with Homeland Security officials as he is with young journalists.

Instead of the tough questions that needed to be as to why Imran Khan was hauled off a US bound flight for questioning, DAWN News and another private channel engaged in a typical soft ball interview with Imran Khan.

For Imran Khan to allegedly be questioned for mis-declaration of cash raises a number of highly pertainent questions:

Given that Imran Khan was likely carrying funds in excess of $10,000 USD for him to he hauled for questioning, isn’t there a possibility that he might have been transferring this undeclared wealth to extremist fronts in Pakistan.  Given that such a transfer would be off the books and difficult to trace, it is all the more imperative that serious questions are asked about Imran Khan’s fund raising efforts.

Anas Abbas’s excellent expose on Imran Khan in the DAWN blogs section has asked this pertainent question and deserves a separate post.  Pakistan’s mainstream corporate media needs to look into this – an unlikely possibility given their largely pro-Taliban and pro PCO Judiciary bias.  A young Canadian reporter was bullied by Imran Khan’s entourage for asking a very pertainent question on Ahmedi muslim, Hindu and LGBT rights.  He should have realized that the arrogant Taliban Khan is not used to such questions from Pakistan’s corporate media.

The Pakistani media is an alternate universe where the overwhelmingly Jamaati anchors and hacks suck up to religious fanatics, conspiracy theorists, self-glorifying ex-civil military public servants and pro Taliban chauvinist politicians and their toadies.  In this media of selective morality and highly questionable journalistic ethics, PPP bashing is the favourite past time.  One cannot expect such a media do its job and seriously investigate why Imran Khan was actually stopped by US security officials.  They could start by quesinning his  flimsy excuse that he was stopped because of his stance on drones.