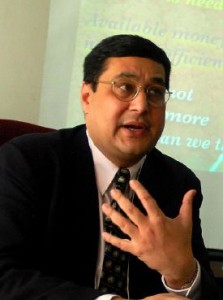 “Verily we have brainwashed Mummy-Daddy crowd into Ghairatmands so that they may appreciate Mullah Omar.  For Truly, there is nothing more cool than the support at LUMS for Taliban sympathizing Ghairatmands such as Hazrat Imran Khan (HIK) and Hazrat Iftikhar Chaudhry (HIC).  For infusing LUMS with ghairat, we must be grateful to such glorious sons of brigadiers as LUMS VC Adil Najam.  Do you not recognize the signs that when the Cock Croweth in the morn and Professor Hoodbhoy Croweth about such devilish things such as science and (gasp) gravity!

In this confusion arose Son of a Brigadier Adil Najam and using his Righteous Powers, he ensured that Hoodbhoy did not Croweth about science at Jamia Madrassat-ul-Uloom Al-LUMS.  For surely, there is nothing more beautiful than the Golden teachings of Hamza Tzortzis and Farhat Hashmi.  Verily such teachings must not be polluted by the art of the devil known as “Science”. Have you not read HIK and how he debunked Science and Professor Hoodhoy! Truly, for us, The Ghairat is Sufficient”, (Hujjaji Chronicles, Chapter 19, The Book of 420 – LUMS Edition)

These days the Beyghairats of BZP (Bhutto Zardari Party) and their sympathizers are running a campaign in support of CIA education Drone agent Melanie Josephine aka Malala Yousufzai.  Therefore we must commend our glorious son of a Brigadier for making sure that Professor Hoodbhoy’s propaganda about science did not endure at LUMS.

Son of a Brigadier, Adil Najam has proven to be a Pious Patriotic Puttar who put the interests of ghairat before such perfidious things as science and that human rights and rationality mumbo-jumbo that Professor Hoodbhoy talks about. Ghairat icons like Adil Najam are not easy to construct – they take decades but finally the investment (of those who protect our ghairat frontiers) is paying off.  You see, Adil Najam is not just any ordinary ghairatmand.  He is a very sophisticated one.

For some years he ran the All Things Pakistan (Pakistaniat) website where he promoted safe causes that would not anger our oppressed and underfunded Pak Fauj.  He catered to the whims of our glorious pro-Taliban Upper Middle class Mummy-Daddy brigade – he attacked BZP but was always soft with the Taliban and its political fronts such as patriotic puttar groups like Pakistan Muslim League (Nawaz) and Pakistan Tehrik-e-Insaf (Imran Khan Group).

Unlike Beyghairats, let me point out that I am Bi-Ghairat and swing both ways – if PTI does not pan out till the elections, I have not burnt my bridges with the other Taliban group, the PML N.  Most of us who are with Jamaat –e- Islami are Bi-Ghairats and in the end, we will end up supporting the agenda of both.  But I digress.

All Ghairatmands, including Bi-Ghairats like me are deeply appreciative of this fearless act of courage by Son of a Brigadier Adil Najam.  I still remember the heady days of the Lawyer’s Movement when Jamaat-e-Islami and PML N ordered massive amounts of black coats so that we could inflate the number of lawyers at various rallies.  Jamaat-e-Islami and Sipah-e-Sahaba will never forget the support shown by LUMS Mummy-Daddy Brigade during the Lawyer’s Movement.  Thanks to their support and this movement, patriots like Malik Ishaq and Hafiz Saeed are free and comrade Nawaz Sharif has been saved by His Holiness Highness Hazrat Iftikhar Chauhdry, Leader of the Supreme League of Justice Party (HHH SLOP).

SLOP saved comrade Nawaz Sharif on numerous occasions including the recently concluded Asghar Khan case where SLOP did an excellent job of confusion.  SLOP proved that only those who give bribes are guilty – those who may have taken them don’t exist because the list was incomplete.  Incomplete = absolution and thanks to SLOP, we will not have to see the ignominy of Nawaz Sharif, Javed Hashmi and other ghairatmands being declared guilty by their own courts.

Adil Najam has played his cards beautifully.  Today, LUMS, like Jamia Uloom Haqqania, Jamia Binoria and Lal Masjid is another bastion of PTI-Chaudhry supporting ghairatmands and has finally been cleansed of such polluting influences such as science and logic and rationality.  I propose the following names should be considered for LUMS faculty: 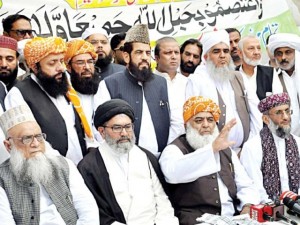 This is a winning formula which I am sharing with my like-minded fellow ghairatmand Son of a Brigadier Adil Najam.  This is not the time for half measures.  Half measures would not have succeeded when Jamaat-e-Islami and PTI swung into action to expose Melanie Josephine for the CIA Education drone that she is.  Similarly Adil Najam has taken a brave step and ghairatmands must now rally behind him and fulfil the agenda of the overhaul, as outlined above, of LUMS, Jazakallah!