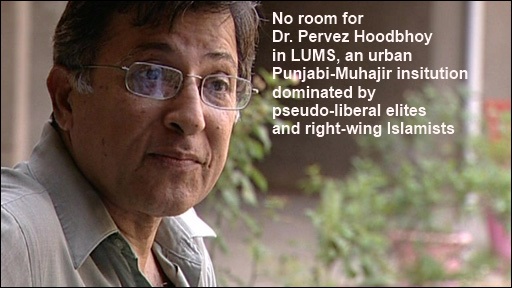 Related post: Reasons given for not having me at LUMS have been reinvented from time to time: Dr. Pervez Hoodbhoy’s letter to LUMS VC Adil Najam

It is disturbing but hardly surprising to learn that LUMS administration has refused to renew the employment contract of Pakistan’s eminent scholar Dr. Pervez Hoodbhoy. Apparently the decision to fire him has to do with the content of his course Science and Religion.

In the last few years, LUMS has established reputation of a pro-establishment academic institution dominated by Punjabi-Muhajir Islamists and pseudo-liberal elites. Financed by Punjab’s mercantile class, LUMS administration and faculty members have continued to serve the wider interests of Pakistan’s ruling classes, particularly those of military establishment.

For example, while we witnessed big demonstrations organized by LUMS students and faculty members in support of a corrupt PCO judge Iftikhar Chaudhry and a pro-Taliban politician Imran Khan, there has been complete silence over genocide of Shia Muslims, Balochs, Pashtuns etc at the hands of Punjabi-establishment dominated army and its Takfiri Deobandi proxies (ASWJ-LeJ, Taliban etc).

Ironically, Dr. Hoodbhoy made it through several decades at a public university (QAU, Islamabad), however, a private, superficially ‘liberal’, university (LUMS) couldn’t digest his views.

Higher education institutions are meant to further critical debate and promote free thinking. Firing Hoodbhoy is a major loss for LUMS students, if not for its right-wing and pseudo-liberal faculty and administration.

As noted by Nadeem Paracha: “LUMS fired Dr. Hoodbhoy. Are they now looking towards Aamir Liaqat as a replacement? Or maybe Zakir Naik. LUMS set to produce its first batch of Islamist yuppies.”

This confirms our long held theory that there is not much distinction between the Tablighi Deobandi and pseudo-liberal dominated LUMS and the Takfiri Deobandi dominated Jamia Binoria. In fact, the latter is a tad more transparent in its right-wing agenda and inclinations. Similarly, there is not much difference between Adil Najam and Noman Ul Haq of LUMS and Mufti Taqi Usmani and Mufti Naeem of Jamia Binoria. Once again, the latter two teachers are more open and transparent in their pro-Deobandi-Salafist views.

Here are a few posts which demonstrate that LUMS’s current Vice Chancellor is a right-wing leaning pseudo-liberal bigot; himself a son of an army officer (brigadier), Adil Najam remains loyal to Pakistan Army, and hates progressive scholars and politicians. https://lubpak.com/archives/tag/adil-najam

Overall, the LUMS decision to fire Hoodbhoy bodes ill for Pakistan when its “best” academic institutions refuse to allow room for debate and dialogue.

Prof. Hoodbhoy is a rare individual who has not only done excellent work in physics but has also spent a lot of time on understanding and explaining the issues of higher education and social evolution of Pakistan. His work for the promotion of science is widely recognized in and outside Pakistan. In the larger public interest, he spent months and years writing and producing television programs such as “rastay ilm kay”, which discussed problems of education in Pakistan, “bazm-e-kainat, which explained in simple terms the scientific method and topics such as black holes, quantum mechanics and particle physics. His efforts to promote higher education have been recognized internationally and he is the recipient of UNESCO’s Kalinga prize and the American Physical Society’s Joseph A. Burton Award. More importantly, his bold opposition to right-wing and pseudo-liberal toadies of Pakistani establishment, the visible and closet Taliban, have earned him the wrath of apologists of the Taliban and Sipah-e-Sahaba.

For example, a few years ago, Dr Hoodbhoy said in an interview to BBC that the fact that Taliban have their supporters among the urban elites in Pakistan is much more dangerous than the threat that Taliban pose to Pakistan. http://news.bbc.co.uk/1/hi/programmes/newsnight/8113664.stm

LUMS students are currently petitioning the LUMS administration for the extension of Dr Hoodbhoy’s post without degradation of employment terms. It’s our appeal to all teachers, scholars, media persons, students and other citizens to extend full support to Dr. Hoodbhoy and force LUMS governing body and administration, particularly its right-wing leaning VC Adil Najam and Professor Noman Ul Haq (of School of Humanities and Social Sciences), to review their decision to fire Hoodbhoy.

If somebody’s dismissal will be in greater interest of LUMS, it has to be that of right-wing and pseudo-liberal bigots such as Adil Najam, Rasul Bux Raees and Noman Ul Haq.

It has recently come to our knowledge that Dr Hoodbhoy will be leaving LUMS at the end of this term. Before any decision could be finalized, we, the student body, wanted to ensure that our voices regarding this matter are heard. As his students, Dr Hoodbhoy holds a very esteemed station for us. Not only is he an invaluable asset as an instructor but continues to be a mentor par excellence to all those students who seek his advise. His every lecture and talk has displayed his academic excellence and losing him would be a great loss for LUMS, especially for students.

We would like to respectfully request that his term be extended without any adverse change in conditions of his employment. Hopefully our opinions will also be taken under consideration. 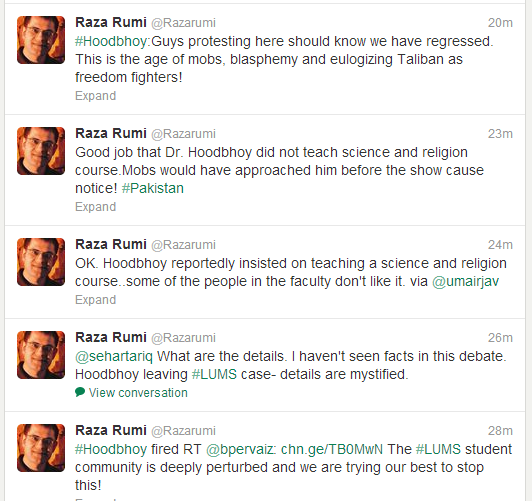 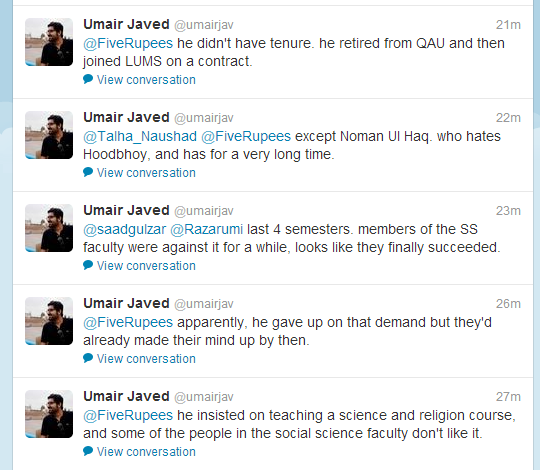 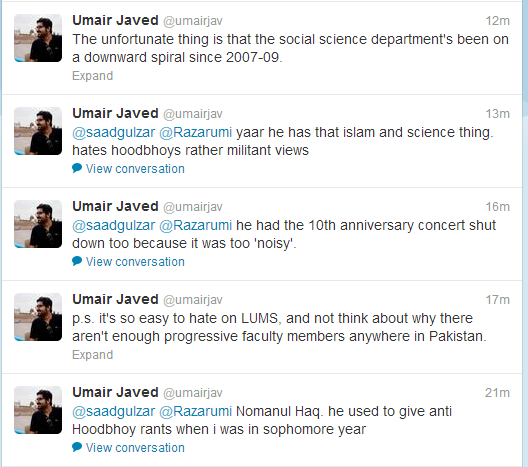