A few days ago, LUBP posted an article by Raza Changezi on Hazara Democratic Party’s (HDP) questionable role in multiple events. (HDP is an ethnocentric party with limited influence in Quetta’s Hazara community.) The article angered HDP activists on social networking websites especially on Twitter. LUBP asked the HDP activists to rebut the article which it will publish. However, turning down the offer, HDP activists resorted to tactics and harassment which are generally known to be a trait of Zaid Hamid and Imran Khan fan clubs.

HDP’s activists on Twitter are now resorting to indecent acts such as making fake accounts to not only abuse the editor Abdul Nishapuri and other LUBP team members but also other progressive activists.

LUBP is proud of its editorial independence and critical approach. In the past we have published critical posts even against President Zardari, Shia clerics, political parties like Muslim League Nawaz and Jamat-e Islami. We have done scathing criticism of Pakistan Tehrik-e Insaf, but never had anyone resorted to the means that activists of HDP have, doing every imaginable and unimaginable indecent act.

One HDP activsit Eliya Hazara whose bio reads s/he lives in Australia threatened LUBP to hack its website. LUBP of course takes all the threats seriously, and is publishing the (snapshots of) threat with the indecent language HDP activists have been using since then. If LUBP is hacked, it reserves the right to take legal actions against Eliya Hazara and all those activists who supported her/him by contacting the home country as there are strict International laws in place against hacking. 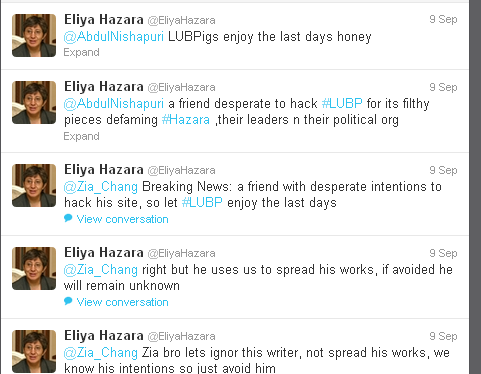 Note the sequence of the tweets. An HDP activist Zia AliZada uses the term LUDP, Let us destroy Pakistan and within few hours one such id pops us and M. Saleem Javed (head of HDP social media team) refers every follower to Team_LUDP.

And then from nowhere Team_LUDP comes which is supported by Saleem Javed, the head of HDP social networking websites. Also see Saleem Javed’s endorsement.

On 9th September after Eliya Hazara used bad language, a new ID by the handle of Fiazzan appeared. Fiazzan who is either Eliya Hazara or Zia Ali Zada in Karachi uses very abusive language and makes more offensive IDs, uses dirty things in those IDs and accuses them of being run by LUBP. We ask every reader to beware of Fiazzan run by HDP social networking activists with full support of Saleem Javed and other HDP activists on Twitter. Fiazzan’s language shows how his party HDP can behave with anyone who tries to question the party’s motives.

HDP and specially Saleem Javed are encouraging these abusive persons. Here are the evidences of it. 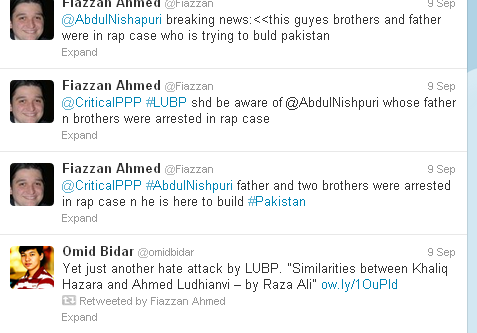 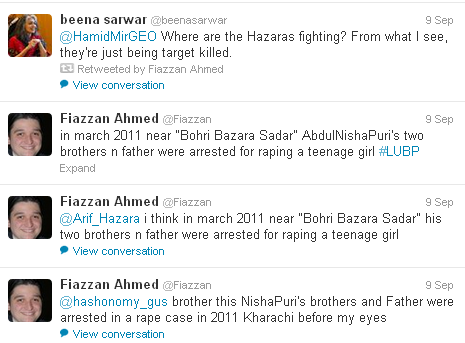 Also see how Saleem Javed, who has indulged in indecent behaviour of making and encouraging sham IDs, attributes something which the editor Abdul Nishapuri and other LUBP authors never said. Mr. Changzi’s article was about HDP, not about Shia Hazaras (the readers are requested to read the article to see the falsehood of Saleem Javed). Note that Saleem Javed and his cohorts nowhere use HDP’s name when he mentions LUBP, he rather dishonestly uses ‘Hazara’ everywhere. He does that to cheat the impressionable Shia Hazaras.

Since Saleem Javed is known to be a mediocre writer, we know he can only resort to such lowly means. His politiciazation of Shia genocide is most glaring aspect of his personality. He tries to misrepresent the Shia genocide in Quetta as ethnic cleansing, and like HDP (which wants to separate Shia Hazaras from Shias of Pakistan), Saleem Javed wants to separate Shia Hazaras of Quetta from other Shias of Pakistan in Twitter by terming it ‘Hazara Genocide’. Above evidence shows how he has been lying since beginning. Given his background and being the head of HDP Social Networking, we ask the mainstream press not to present his narrative of ‘Hazara Genocide’ again.

Here are some of the main questions that Raza Changezi’s article asked which HDP’s sociala activists did not answer and started threatening and using fake IDs to silence the divergent view:

Where did HDP stand before the Yousufi’s killing?

What was the impact of internal politics of HDP on the relations between the current leader Khaliq and Yousufi?

Has HDP won any elections?

No question was answered by HDP’s activists. Instead, they are now spreading disinformation. HDP stands exposed on political front in Quetta, as well as on social media with all the lies they had been telling with their real and newly made fake Twitter profiles.