Home  »  Original Articles   »   Semantics of Hazara genocide or Shia genocide: Why no unity in outrage?

“If this isn’t Shia genocide, what is?” – by Zofeen Ebrahim

On Twitter, there are currently four groups who are a part of the discourse on Hazara Genocide or Shia Genocide in Quetta and other parts of Balochistan. 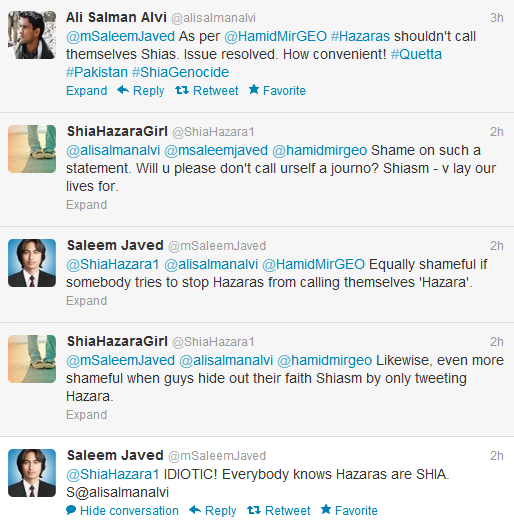 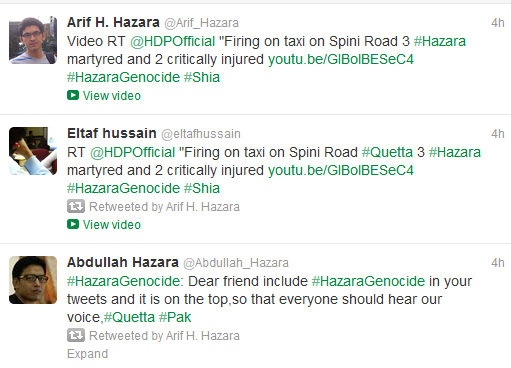 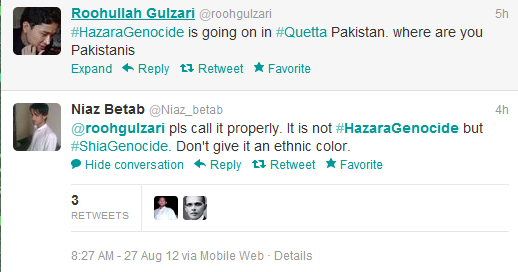 They insist that Hazaras of Quetta are being killed due to their ethnicity, not faith. They don’t want to highlight the sectarian dimension of killings because in their words they “don’t want to follow the Iranian agenda of Sunni-Shia sectarianism”. They insist their ethnicity is the main reason for their slaughter in Quetta and other areas of Balochistan. Some secular Hazaras, who are not transparent about their affiliation or support of the HDP, too support the HDP narrative. Such non-sectarian (hiding or suppressing the Shia identity of victims) narrative is also used by Munawar Hasan (Jamaat-e-Islami), Hamid Mir (Jang/Geo), Javed Chaudhry and other right-wingers.

Shia religious parties, with generally Iran-leaning stance, insist that Shia genocide in Quetta and other parts of the country is an Israeli-American-Indian-Saudi conspiracy against Shiites of Pakistan. They insist that Shia genocide in Pakistan is a step towards future invasion of Iran by the USA and Israel. Examples of such groups include the MWM, ISO and SUC/TJP. They do not have prominent presence on Twitter, however, they are quite influential in Shiite mosques and local communities. 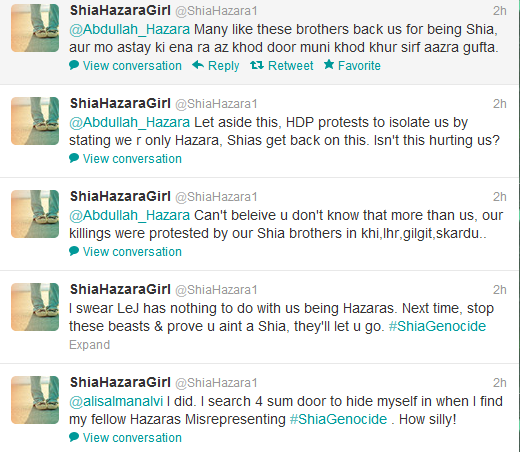 A large number of secular Shia individuals (including Shia Hazaras and non-Hazara Shias) in Quetta and other parts of Pakistan argue that the current wave of Shia genocide in Quetta, including the massacres of Shia Hazaras, cannot be seen in isolation from the State-sponsored violence against Shia Muslims in other parts of the country, e.g., Parachinar, Gilgit-Baltistan, D.I.Khan, Karachi etc.

They blame that activists and supporters of the HDP (Hazara Democratic Party) are unduly highlighting the Hazara ethnicity dimension in order to dilute the country-wide Shia genocide and to extract maximum local political leverage for the HDP. While they insist that Shia sect (main cause) is the main cause of the slaughter of Shias of Quetta, they also acknowledge that Hazara racial features (auxiliary enabler) faciliate their murder for ease in identification. They also state that HDP does not represent all Hazaras; in fact majority of Hazaras are aligned with mainstream political parties, e.g., Pakistan Peoples Party which has a sitting Shia Hazara Member of Parliament elected from Quetta, Pakhtunkhwa Milli Awami Party (PKMAP), Hazara Tribal Chief (Sardar Sadat) etc. Not unlike Pakistan Muslim League which does not represent majority of Muslims in Pakistan, HDP does not represent majority of Hazaras. 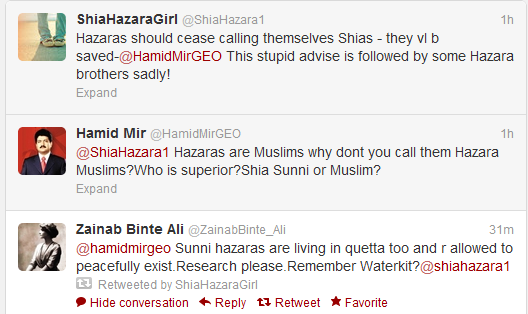 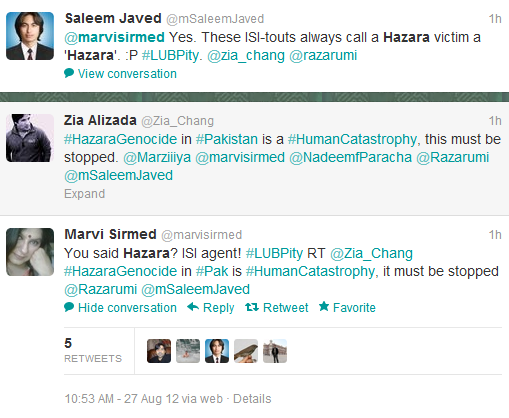 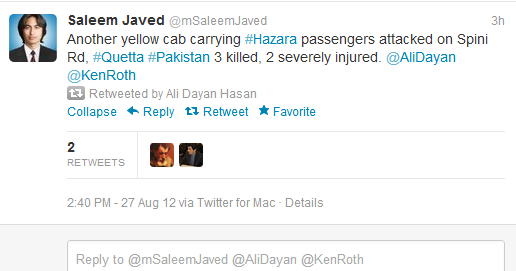 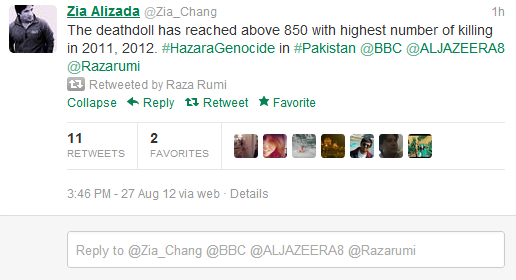 Quite a few Pakistani, Afghan and other journalists and TV anchors either describe Shia genocide in ethnic terms (Hazara specific) or sectarian terms (Sunni vs Shia).

On Twitter and also in mainstream media, some of them are also seen promoting or retweeting the Hazara ethnicity narrative.

While the Sunni-Shia sectarian angle is outrightly absurd given that a large number of Sunni Barelvis and moderate Deobandis too are being killed by same radicalized Doebandi-Wahabi terrorists, the Hazara ethnicity angle is also problematic. It is against journalistic ethics and profesional conduct to propagate and promote political agendas of an ethnic political party (HDP). Thus, if media persons are really choosing to highlight the Hazara ethnicity (auxiliary cause/enablers of slaughter) instead of Shia identity (main cause of slaughter), they should transparently state that this is the view of the HDP, which does not necessarily represent the view of overall Hazara community nor of all Shias.

Why no unity in rage?

Veteran journalist Abbas Nasir asked a pertinent question on Twitter today. The question as well as two of the most important responses are provided below.

Abbas Nasir ‏@abbasnasir59
I’m ignorant about the intricacies of the Shia-Hazara issue. But despite daily attack by murderers, don’t understand why no unity in outrage? Some Shia-Hazara, their backers, reserve the choicest words for each other and not the killers. Can someone pls enlighten me? Thank you.

Darvesh ‏@Darveshh
@abbasnasir59 Sir, you know it more than I do or anyone else does that it’s #ShiaGenocide. You’ve been seeing it when many were not born. It hurts me to see the witting/unwitting obfuscation.Choicest words must be reserved for LEJ which is clear who they kill: Shias. Please tell all of those who don’t know, how many Shia professionals were killed in Karachi alone because they were Shia? Why did many Shia professionals, and all those who could, had to leave Karachi in 90s? Was it ethnicity or faith? Enlighten us. I was a child when I used to hear about Shia killings in Karachi. Quetta was peaceful back then. Was it ethnic in Karachi? Being Hazaras, our features make us easily identifiable. We are easy preys. That is not meant to simplify it. More than 19,000 Shias killed around the country. They lost their lives because they adhered to this faith. What else is it? Iam a Hazara, and a proud one. But I will not give it ethnic color. It’s pure #ShiaGenocide From Parachinar/Gilgit/Kar to Quetta. Having said that, no more arguments on semantics. When will Pakistanis rise against monsters? #ShiaGenocide When? Ever? Of 800 victims of #ShiaGenocide in Quetta, around 200 of them are non-Hazara Shia. You are a Hazara or Toori, a Gilgiti or Pashtun, a Dera Waal or Urdu speaking, your being Shia makes you vulnerarble. #ShiaGenocide. A great example is @AnserAbbas who lost 20 members of his family in suicide attack in hospital,and his both arms. operates computer with feet now #DIKhan

Saleem Javed ‏@mSaleemJaved
@abbasnasir59 Dear, bro. This is not an issue at all. You raise your voice and some anonymous people pop up to divert your attention. If Hazara genocide is a painted color to Shia genocide then that would be a painted color to Muslim genocide. Which would in turn be a painted color to Human genocide. While it’s clear that Shias are killed across Pakistan, the case of Hazaras is much more complex amalgam of many factors. Not just ‘Faith’-based. If you call it ShiaGenocide, you are dividing Pakistan. If you call it HazaraGenocide, you are dividing Shias. Then let’s remain silent then. Have always raised my voice against killing of #Shias across Pakistan regardless of ethnicity. As Haider Changezi tweeted: Irani Mullah’s wants to wipe out #Hazara from my identity! #Paki Establishment wants to wipe out #Shia from my identity. While I bleed and bury my dead!