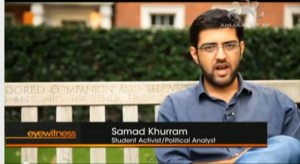 Samad Khurram’s analysis in Eyewitness Pakistan Special: Part One – The Role of Islam in Pakistan (Ahlulbayt TV) for the most part sounds like a refined version of a Jamaat-e-Islami apologist.  This much is obvious from roughly 3:00 minutes into the video clip available on Youtube.

There is almost a hint of triumph when Samad Khurram refers to who has won the ideological debate in Pakistan. Like many right-wing urban hypernationalists, Samad makes generous use of sweeping generalizations when he highlights that it is “one side” (the obvious reference to Jamaat-e-Islami and its subsidiary groups like PML- N and PTI) that have won the ideological debate for a theocratic state.

Such a view (mostly dependant on urban surveys of a tiny sample of upper-middle class youths) is negated when one looks at the recent bye-elections victory in NA 151 where the PPP candidate, Abdul Qadir Gilani defeated the candidate enjoying the support of Jamaat-e-Islami and its combined ideological subsidiaries like the PML N, PTI and “independant” Judiciary.  Throughout Pakistan’s history, the Jamaat-e-Islami has had a dismal electoral performance inspite of support from the military establishment.  PML N has fared better but only on the premise of its economic platform.

His analysis of the genesis of Pakistan is equally poor and biased. During his explanation, Samad subtly reinforces the false binary propagated by the likes of Jamaat-e-Islami that secularism = irreligious or “La-Deeniyat”.

He also refers to the Hobbesian concept of a “Social Contract”. Factually, right uptil the end, Jinnah was willing to accept a united India and thus the need for developing a separate social contract never existed. (Refer to Ayesha Jalal’s “Jinnah: The Sole Spokesman”).   Samad’s analysis here is frankly quite shoddy in stark contrast to Ali Dayan’s more complex and layered reasoning in the same programme. Also, in the 1946 elections, Muslim League had significant electoral victories in what became the future Bangladesh and Sindh.  In Punjab, it was the Unionist party while the Bacha Khan’s Khudai Khitmatgars dominated the political scene in what is today Khyber Pukhtunkhwa. Balochistan was not a part of Pakistan until its annexation by Jinnah in 1948.  Samad simply glosses over these essential details in a typical Jamaat-e-Islami nationalist fashion.

What is most problematic is how Samad insidiously presents the Jamaat-e-Islami point of view on Bhutto (he was viewed as a “drunkard” “debaucherer”) as “public perception”.  Similarly, the military dictator, General Zia-ul-Haq did not “rally the people” on the basis of religion. He ruled with an iron fist, killed, tortured and imprisoned thousands of pro-democracy activists and held a sham referendum to justify his theocratization measures.  In all of this, he was ably supported by a pliant Judiciary which by now had already developed a reputation for collaborating with Martial Law regimes.

The fine details about pro-Wahhabi leanings of General Zia-ul-Haq and pluralist leanings of Zulfikar Ali Bhutto are of course omitted and Samad Khurram’s personal biased are too obvious to ignore, particularly for the niche audience watching Ahlulbayt TV.

During this stretch in the clip (starting roughly from 22:00 minutes), Samad makes some of the most horrendously biased and false claims:

Samad also contradicts himself when he first refers to the 1970’s as the beginning of Pakistan’s theocratization and then flip flops by calling it a very open society during the same time period. When he talks of explicit social restrictions, he conviniently makes no mention or explicit condemnation of General Zia.  When he talks of the alleged perference of Pakistanis for Sharia Law and the harsh Hudood Laws, he refers to both imagined and real polls that would support it.

If anyone needed proof of the similarity between Samad Khurram and the Jang Group’s notorious Pro-Taliban ideologue Ansar Abbasi, refer to 26:00 minutes segment of the video clip. In what sounds like a indirect defense of the Taliban’s lashing of a teenager, Samad only presents the Taliban apologist arguements “She was an adultress” “This video is a fake” while diluting the the horror and outrage that the general public felt when this video was aired.  To brush this aside as a case of dampened enthusiasm for Sharia Law is the height of intellectual dishonesty.

For more on how Samad’s probable ideological mentors Ansar Abbasi and Hamid Mir distort the national discourse, refer to http://www.youtube.com/watch?v=m8af6TPUvcE – seeing the justification of the brutal and cowardly murder of Salman Taseer by Ansar Abbasi and his prodding and support by Hamid Mir is disgusting.  Quite like Samad’s own misrepresentation of Governor Taseer’s murder.  Then again, what else should one be expecting from someone whose discourse is eerily similar to that of a Jamaat-e-Islami activist- only more refined.

And on and on it continues.

He indirectly  justifies the Taliban by presenting the Jamaat discourse which in turn sees them as a resistence movement.  This is an effective tactic in obscuring and diluting the role of Pakistan’s ISI in creating, sponsoring, funding and continuing to support these murderous thugs.  The blowback of this tactic to Pakistan has resulted in the deaths of over 40,000 Pakistanis in this decade alone.

“We strongly believe that Kashmir should be part of Pakistan” – Someone should send Samad the memo that even Pakistan’s official stance supports a plebescite where Kashmiris themselves have a right to decide what they want. Also, it’s not Lashkar-e-Tayyaba but Lashkar-e-Jhangvi that is engaged in Shia Genocide.

While Samad attempts to create a (short) distance between himself and the Jamaati viewpoint that forms the bulk of his interview, he fails to convince as he never presents the counterpoint.  This is subtle intellectual dishonesty that needs to be highlighted. This dishonesty is a typical hallmark of Pakistan’s seemingly liberal but inherently anti-diversity upper-middle class which remains clandestinely pro-Wahhabi and therefore remains tight-lipped on the ongoing Shia pogroms taking place in Pakistan. This also explains why many in this class  remain generally aligned with Chief Justice Iftikhar Chaudhry, Imran Khan and other Taliban apologists.

For an overview of what Pakisatn’s millions of Shias think about CJ Iftikhar Chaudhry and his apologists, refer to this post: Pakistan’s Chief Justice humiliated in London, Rome, Karachi and Lahore – by Mohsin Sheharyar

Towards the end, Samad unwittingly refers to the Government being bogged down in survivalist mode due to the Judiciary’s interventionist role in the Exeutive and Legislature.  This is cited as a reason for the Government’s failure to do something about the ongoing Shia Genocide in Pakistan.  While the elected government needs to be critisized for its helplessness and inability to do anything beyond issuing statements, the Judiciary and the Opposition are actually complicit in the growing extremism in Pakistan and the resulting genocide of Shias.

However, consistent to the remainder of his interview, Samad excels in half-truths.  He conveniently  fails to mention how the Judiciary has gone out of its way to release mass murdering terrorists – refer to Harris Bin Munawar’s “Lashkar-e-Jhangvi and the “lack of evidence”.

It is baffling as to why Ahlul-Bayt TV interviewed someone like Samad Khurram for such an important topic.

If one needed an honest appraisal on religious extremism, should one provide equal air time to a sophisticated apologist for religious extremism?  Were Professor Hoodbhoy, Shehla Raza, Farahnaz Ishphani, Hussain Haqqani, Dr. Ayesha Siddiqa, Kamran Shafi, Saroop Ijaz, Khaled Ahmed, Faisal Raza Abidi or Dr. Taqi unavailable? Unfortunately, some of those who portray themselves as liberal champions are also to blame for this as they have actively supported and promoted Samad Khurram.  Ayesha Tammy Haq (a former PTI activist) provides him a regular platform on her weekly TV show.

Samad Khurram’s trajectory as someone who reinforces the Jamaat-e-Islami narrative needs to be analyzed.  When Samad Khurram made his token gesture of rejecting the US ambassador’s award on the pretext of opposing drone strikes that have killed top Taliban and Al Qaeda leaders, he proceeded to study at a University that is arguably one of the largest beneficiaries of US public and private endownment.

Like other young upper-middle class urban activists,  Samad gained notoreity as being part of the increasingly discredited Lawyer’s Movement.  Has Ahlul-Bayt TV done its research on how this movement was hijacked by the Jamaat-e-Islami, Sipah-e-Sahaba (now renamed as Ahle Sunnat Wal Jamaat), General Hamid Gul, PESA (an ISI-backed lobby of retired army officers) and Roedad Khan.  This movement lost complete credibility when the murderer of Taseer was celebrated as a hero by many of the same lawyers while the few who disagreed cowered and went into hiding.

Given this background, AB TV should have been more careful in selecting a candidate. 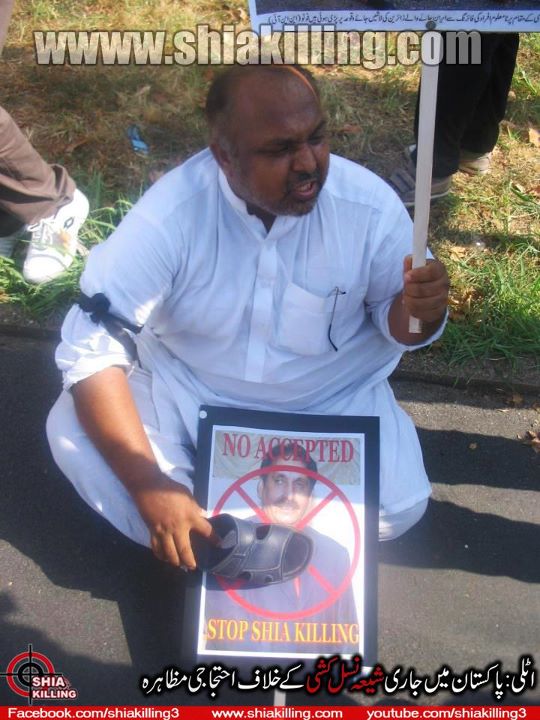 Have you ever seen 300,000 people insulting a (biased) chief justice of their country?