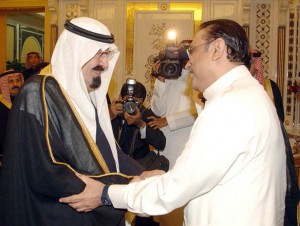 President Zardari must break his silence on Shia genocide

In Makkah, President Zardari set new records of his love and verbal opulence for King Abdullah, the Granddaddy of Islamofascism and the fountainhead of the money sent to Shia-killing terrorists in Pakistan and elsewhere. To a Saudi journalist he said, “Pak-Saudi relationship is based on stable and mature ties.” Stable. Really? What is the stability like? Pakistan has collapsed under the Saudi-sponsored terrorism mammoth and yet Zardari calls it stable. Allah! Allah! Allah! Zardari’s rangini-e-naubahar!

Listen to Naheed Akhtar on this:

Mature. What maturity? Calling the Shias kafir and kill them like cockroaches. Well done Zardari!

Zardari took another circus-like somersault. He said, “Pakistanis will never forget the humanity of King Abdullah as he helped people of Pakistan in their troubled moments.”

Now about the OIC conference summoned by King Abdullah. President Zardari said, “It is indeed most thoughtful of King Abdullah to have offered to host such a conference. It demonstrates his concern for the Muslims and commitment to help resolve the issues facing them through a process of broad-based consultations, negotiations and dialogue.”

The only purpose of the meeting summoned by the King Terror was to suspend Syria, a move which Zardari fully supported. The suspension of Syria was supported by another Friend of the Islamofascist House of Saud: the United States. State Department spokeswoman Victoria Nuland cheered the decision by saying that the suspension of Syria “underscores the Assad regime’s increasing international isolation and the widespread support for the Syrian people and their struggle for a democratic state that represents their aspirations and respects their human rights.”

Having performed the hajj around King Terror of the Islamofascist House of Saud, President Zardari preformed a few minor hajjs (umras). He met the anti-Shia Turkish Primimie Minister and praised Recep Tayyip Erdogan for his “positive role for bringing peace and stability in the Middle East” and said that “Pakistan considers Turkey as an important player in the region.” Now the role played by Erdogan is that he is trying to destroy the Shia leadership in the Middle East. For instance, he has been in the forefront of anti-Assad cabal which wants to install a Salafi/Al-Qaeda government in Syria which will exterminate the Shias in the country. Another jewel in Erdogan’s anti-Shia crown is that under him Turkey has persistently been violating Iraq’s sovereignty. He has declared on many occasions that the democratically-elected prime minister of Iraq Nurul Maliki is an illegitimate ruler. Erdogan’s government has made a treaty with the Kurdish region government in Iraq to siphon off Iraqi oil. Erdogan has violated every international law by signing the treaty over the head of the central government.

After performing a minor hajj around Erdogan, Zardari went on to perform other sacred tricks to please King Terror and the Islamofascists of his ilk. He expressed his deep concern over the alleged killings of Rohingya Muslims in Myanmar. He told his audience that he had already written a letter to the Myanmar government urging it “to take necessary steps to end the bloodshed.” Zardari also urged the OIC “to use its good offices for promoting a process of protecting the life and property of the Muslims of Myanmar.”

Dear readers, Zardari stood up for the glory of King Terror and  Erdogan, and the rights of Rohingya Muslims. However, there was only a little, almost insignificant, omission on his part: The word “Shia” did not find a place on his tongue. Perhaps he forgot a minor detail which is the Shia genocide going on in Bahrain, Saudi Arabia or Zardari’s own Pakistan.