Letter from a from a friend in Pakistan – by Ali Taj 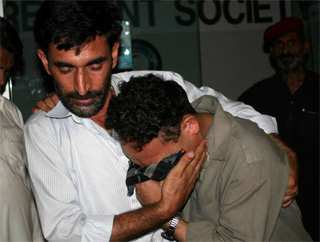 These 22 people, some were going home for eid with gifts for their kids and families were taken off three buses,  identified and slaughtered. The place is somewhere near Lalusar, after Naran, KPK,  en route to GB. I think of the picture postcard beauty of that landscape, its sheer backwardness and now this murder so foul.

9 people from TTP, tried to enter, in fact entered, Kamra, aeronautical complex and tried to overrun it but were killed. All had suicide vests on.

Trying to make sense of it, warrants faith, pure unadulterated faith. But we are human. The degradation of life witnessed  and in many cases suffered by those who were left behind is diabolical. We have a country, an elite, an establishment, a parliament but no people. Nobody seems to care. As a society, we have been subjected to a death by thousand cuts.  For those of you who left these shores, this experience in today’s Pakistan cannot be understood from youtube and phone calls from home. It has to be lived. You cannot even begin to imagine, how desperate it is for many of the poor, the unskilled, the easy prey for hate-mongers.

In Balochistan, they would stop buses, make all dismount, check their ID cards and kill all Punjabis. Then Pashtuns, too. Imagine the luck of a Punjabi or Pashtun dirt poor laborer, who went to the now badlands of interior Balochistan for an honest day’s work and was slaughtered because he was not one of ‘them’. While some of us might  just see, shias are being murdered because they are shias. Punjabis because they are Punjabis in Balochistan. In all these apparently disparate tragedies, I see death of hope. The land suddenly is not big enough for all of us. We have to reduce the number of ‘them’ to leave enough air and water and antibiotics for ‘us’.

The Aurora, Colorado killings, the Wisonsin pogrom of Sikhs. Acid throwing incidents in Lahore, people selling their kids, mother jumping in water with kids to end these meaningless days of hunger. Develop a picture. Can’t we see that we have been at war with ourselves for decades now. The trouble, or at the end of the day the crowning glory, is that it is religion which trumps all. We could not motivate people to go fight the Russians in Afghanistan unless they were painted as atheists and the war was tarred with religion. Do you think that we will go to war for Zardari, Kayani, Nawaz Sharif or the new knight-in-shining-armor, the Conquering Khan or the Chaudhries of Gujrat or Altaf Hussain? There is no other metaphor. So when it happens, it will not unwind without eating its children first.

When I lament over these tragedies, be a sport at least, my grief could be genuine. This lamentation should not be misconstrued to mean that we are against all else too – whatever is good and noble about us and everyday many such individual acts of bravery and solemn faith help me, at least, pull back from the abyss.

Try and understand the reasons the rationale behind this apparent irrationality. Crime is a form of employment. When legitimate ways of making money are gone, people will revert to illegal means. When the lower class is about to be wiped out, no work during the day, no sleep during the night, what should be the natural course of action be for them? What happens in the so called glittering mansion-on-the-hill of the West in times of depression and high employment? Xenophobia. Us and them. If today, our economy starts growing again in a sustainable way, the same out-of-job warriors shall get immersed in getting rich and start befriending ’them’ or at least not minding about ‘them.’ Please read that economic backdrop does explain a lot, but not all, of our sociopathic behavior.

So let us drop the semantics and share the anguish and try to make sense of whatever is going on ‘round here. For every death so foul, try to find faith and little acts of kindness. So let us have some hope and faith that we should not surrender to the elite, the civil-military-feudal establishment and wrest our country from them and develop into a constitutional democracy known for rule of law and compassion.  We are meant for even bigger things. We have to lead the rest of the world by setting higher standards of personal, institutional and societal mores.