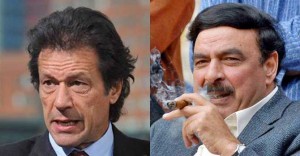 Pakistan is at war!

There are several interrelated armed conflicts underway in Pakistan. According to conservative estimates about 35,600 Pakistanis have been killed after 9/11 and more than 40,000 have been injured during that period by the various parties to the conflict. Several thousand more are being killed every year. This has been the result of decades of ill-fated decisions starting General Zia’s era. There have been destructive changes in the social fabric of the country. Society is being torn apart through convenient misinterpretations of the religion of the state to gain political advantages and often to fight foreign wars. Gradual Saudi-sation has led the country to the brink of collapse. Hate based curricula has not just changed the pathways of society but also culminated grave obliviousness and provided fuel for the fire that emotions create in general public.

But this time, the case is an utterly ironic one. The use of language instigating violence by newest member of the leadership of a political party advocating peace and justice in the country: Yes, I am refereeing to the speech made by Shaikh Rasheed on August 13, 2012, a day before the celebrations of freedom. Not only uncivilized language was used but emotional instructions were specified to the Chief Justice of Pakistan to kill someone… Who could that someone be? Given the antagonism between sitting Chief Justice and the ruling majority, it is not hard to predict the direction in which finger was pointed.

This kind of speech is not only a political slogan but also a symbol of demise to the social values of the country. The typical course to redress such comportment would be to appeal to the highest ranks of judiciary and proposal a trial; however, in a country where legitimacy and reputation of the judicial elite is compromised and fabric of justice is being torn by the leaders of Justice Movement (Tehreek-e-Insaaf), it is very hard to find the avenues of recompense.

If this kind of behavior of a political leadership goes unnoticed by judiciary, then it would not unfair to say that Pakistan is living the darkest era of its history and this August 14 would be the extremist the country has ever been.