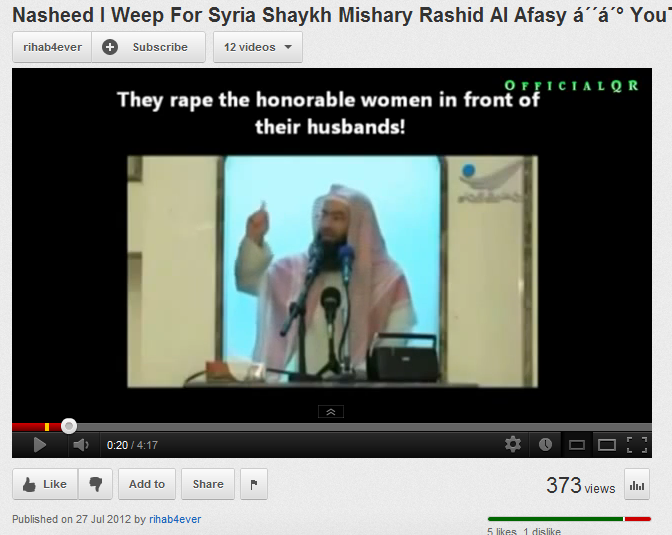 Hamid Mir has circulated a video recently released by Saudi-Salafi propagandists (most probably affiliated to the Al Qaeda militants in Syria) which presents a very partial and sectarian picture of the situation in Syria.

This act of his is nothing less than an indirect incitement against Pakistan’s Shias.  It is indeed disgraceful that the same Hamid Mir is supported by Pakistan’s Fake Civil Society/Fake Liberal elites. Such individuals who are associated with one or more of the following.  The Friday Times, Jinnah Institute, SOCMM12 , Supporters of #IftikharPCO.  Once again, this should make it clear to naive admirers that the English media  = liberal vs Urdu media = Pro-Taliban binery is a false binery.  Both groups, with minor surface differences, peddle the narratives of the Deep State and both are willing or indirect collaborators in the ongoing Shia Genocide in Pakistan.

For an objective account of the situation in Syria which exposes the hypocrisy and ugly role of all players (Assad regime, Hezbullah, Saudi Arabia, Qatar, Turkey, USA, UK), refer to the following article by Robert Fisk:

Has there ever been a Middle Eastern war of such hypocrisy? A war of such cowardice and such mean morality, of such false rhetoric and such public humiliation? I’m not talking about the physical victims of the Syrian tragedy. I’m referring to the utter lies and mendacity of our masters and our own public opinion – eastern as well as western – in response to the slaughter, a vicious pantomime more worthy of Swiftian satire than Tolstoy or Shakespeare.

While Qatar and Saudi Arabia arm and fund the rebels of Syria to overthrow Bashar al-Assad’s Alawite/Shia-Baathist dictatorship, Washington mutters not a word of criticism against them. President Barack Obama and his Secretary of State, Hillary Clinton, say they want a democracy in Syria. But Qatar is an autocracy and Saudi Arabia is among the most pernicious of caliphate-kingly-dictatorships in the Arab world. Rulers of both states inherit power from their families – just as Bashar has done – and Saudi Arabia is an ally of the Salafist-Wahabi rebels in Syria, just as it was the most fervent supporter of the medieval Taliban during Afghanistan’s dark ages.

Indeed, 15 of the 19 hijacker-mass murderers of 11 September, 2001, came from Saudi Arabia – after which, of course, we bombed Afghanistan. The Saudis are repressing their own Shia minority just as they now wish to destroy the Alawite-Shia minority of Syria. And we believe Saudi Arabia wants to set up a democracy in Syria?

Then we have the Shia Hezbollah party/militia in Lebanon, right hand of Shia Iran and supporter of Bashar al-Assad’s regime. For 30 years, Hezbollah has defended the oppressed Shias of southern Lebanon against Israeli aggression. They have presented themselves as the defenders of Palestinian rights in the West Bank and Gaza. But faced with the slow collapse of their ruthless ally in Syria, they have lost their tongue. Not a word have they uttered – nor their princely Sayed Hassan Nasrallah – about the rape and mass murder of Syrian civilians by Bashar’s soldiers and “Shabiha” militia.

Then we have the heroes of America – La Clinton, the Defence Secretary Leon Panetta, and Obama himself. Clinton issues a “stern warning” to Assad. Panetta – the same man who repeated to the last US forces in Iraq that old lie about Saddam’s connection to 9/11 – announces that things are “spiralling out of control” in Syria. They have been doing that for at least six months. Has he just realised? And then Obama told us last week that “given the regime’s stockpile of nuclear weapons, we will continue to make it clear to Assad … that the world is watching”. Now, was it not a County Cork newspaper called the Skibbereen Eagle, fearful of Russia’s designs on China, which declared that it was “keeping an eye … on the Tsar of Russia”? Now it is Obama’s turn to emphasise how little clout he has in the mighty conflicts of the world. How Bashar must be shaking in his boots.

But what US administration would really want to see Bashar’s atrocious archives of torture opened to our gaze? Why, only a few years ago, the Bush administration was sending Muslims to Damascus for Bashar’s torturers to tear their fingernails out for information, imprisoned at the US government’s request in the very hell-hole which Syrian rebels blew to bits last week. Western embassies dutifully supplied the prisoners’ tormentors with questions for the victims. Bashar, you see, was our baby.

Then there’s that neighbouring country which owes us so much gratitude: Iraq. Last week, it suffered in one day 29 bombing attacks in 19 cities, killing 111 civilian and wounding another 235. The same day, Syria’s bloodbath consumed about the same number of innocents. But Iraq was “down the page” from Syria, buried “below the fold”, as we journalists say; because, of course, we gave freedom to Iraq, Jeffersonian democracy, etc, etc, didn’t we? So this slaughter to the east of Syria didn’t have quite the same impact, did it? Nothing we did in 2003 led to Iraq’s suffering today. Right?

Then, of course, there’s us, our dear liberal selves who are so quick to fill the streets of London in protest at the Israeli slaughter of Palestinians. Rightly so, of course. When our political leaders are happy to condemn Arabs for their savagery but too timid to utter a word of the mildest criticism when the Israeli army commits crimes against humanity – or watches its allies do it in Lebanon – ordinary people have to remind the world that they are not as timid as the politicians. But when the scorecard of death in Syria reaches 15,000 or 19,000 – perhaps 14 times as many fatalities as in Israel’s savage 2008-2009 onslaught on Gaza – scarcely a single protester, save for Syrian expatriates abroad, walks the streets to condemn these crimes against humanity. Israel’s crimes have not been on this scale since 1948. Rightly or wrongly, the message that goes out is simple: we demand justice and the right to life for Arabs if they are butchered by the West and its Israeli allies; but not when they are being butchered by their fellow Arabs.

And all the while, we forget the “big” truth. That this is an attempt to crush the Syrian dictatorship not because of our love for Syrians or our hatred of our former friend Bashar al-Assad, or because of our outrage at Russia, whose place in the pantheon of hypocrites is clear when we watch its reaction to all the little Stalingrads across Syria. No, this is all about Iran and our desire to crush the Islamic Republic and its infernal nuclear plans – if they exist – and has nothing to do with human rights or the right to life or the death of Syrian babies. Quelle horreur! 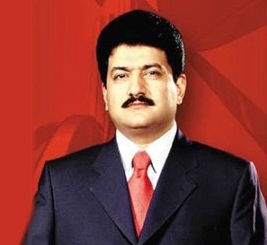 Now compare the above objective and balanced account of the Syrian crisis with the sectarian and biased propaganda circulated by touts on either side (Assad regime and Saudi Salafists).

In the case of Hamid Mir, he deemed it fit to circulate the Al Qaeda / Salafist video on Twitter. The video has been produced by Saudi Salafists and is in circulation in Pakistan by the Sipah-e-Sahaba Pakistan (ASWJ), killers of at least 19,000 Shias, the very topic (Shia genocide) on which Hamid Mir religiously remains silent or, worse, tries to misrepresent it as a Sunni-Shia sectarian or ethnic issue.

Hamid Mir ‏@HamidMirGEO
Very sad to see that a Muslim Army is killing Muslims in Syria.Bashar al Asad is Musharraf of Syria.Watch this tragedy http://www.youtube.com/watch?v=SyyytfXuqj8

The video circulated by Hamid Mir was produced by none other than Rihab4Eever, a Saudi Slafist operative in social media with deeply sectarian views about Shias, Sufi Sunnis and other groups. Check out his hate speech against Shia Muslims and Shia Islamic beliefs, a typical hallmark of Saudi Salafists: 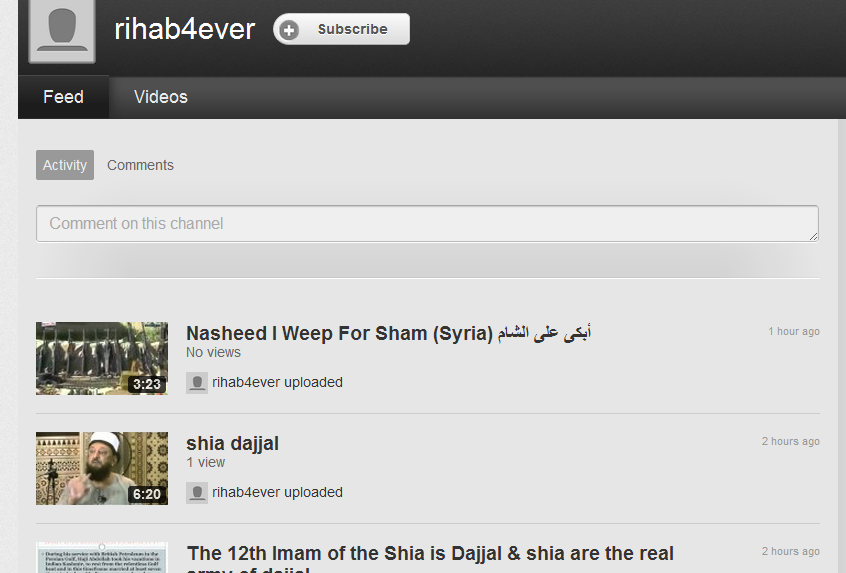 Lo and behold, who are there on Twitter celebrating Hamid Mir’s reinforcement of the Salafist propaganda on Syria? Of course, his life long friends, the Punjabi Taliban aka Sipah-e-Sahaba Pakistan (ASWJ/LeJ terrorist): 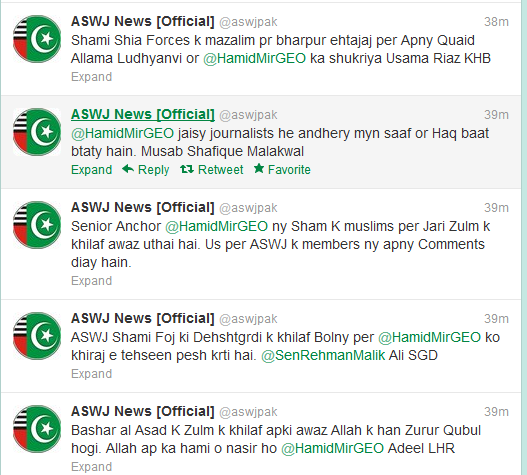 Hamid Mir responds to a Shia activist and describes him and Shia Muslims of Iraq, Afghanistan etc as CIA agents. 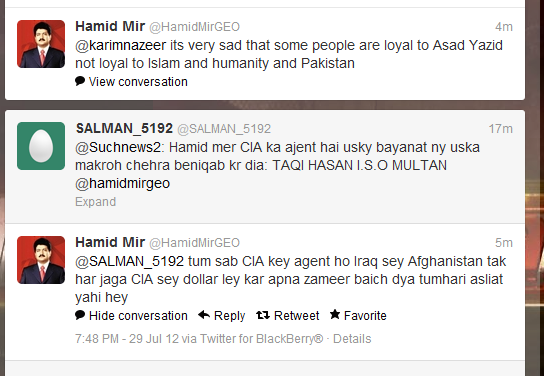 Hamid Mir is the same bigot who mourns Muslim massacre in Burma but remains quiet on Shia genocide in Pakistan at the hands of his radical Deobandi, Wahhabi friends Taliban, ASWJ/SSP terrorists. Instead he calls it routine Sunni-Shia sectarian violence or a Hazara specific ethnic issue.

He is the same bigot who refuses to pay attention to the sarcastic remark by the Ambassador of Myanmar to Pakistan: