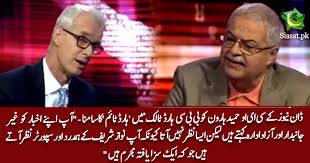 I would strongly recommend that people listen to this potcast. The YouTube video has been removed!

Throughout the interview, Hameed Haroon does not provide any substantive evidence to back up any of his claims. Sakur correctly highlights that DAWN seems to have become a partisan of the convicted Nawaz Sharif.

Some of us have been saying this for quite some time and have provided evidence, unlike the bombastic, pompous but essentially vacuous discourse of Hameed Haroon and the other Patwaris at DAWN.

Let’s start with the romanticised view of the #PTM. We all agree that the basic demands of the PTM about the rights and dignity of Pashtuns are valid. Even as Pakistan’s judiciary has weakened and judicial reforms stalled after the over-hyped lawyer’s movement, extra judicial killings need to be investigated. Similarly, security should not mean the lack of dignity for tribes (Meshuds) and groups.

However, the claim that PTM was not getting media coverage is dishonest. Some of us had pointed out this contradiction where in actuality, DAWN was providing front page coverage along with live feeds front and center on its website for days on end.

Similarly, DAWN and other media outlets have become too embedded in covering the PTM. If they were more objective, they would have highlighted the problematic visit of PTM’s leadership to the notorious Jamia Haqqania at Akora Khattak. DAWN and other media groups should have critiqued how PPP was not allowed to address PTM but a banned, sectarian hate organisation like ASWJ was provided a platform in a PTM rally. Similarly, DAWN and others failed to point out how PTM has glossed over the brutal lynching of Pashtun student, Mashal Khan as well as the repeated massacres of Turi and Bangash Pashtuns by the Taliban.

What happened to journalistic standards?

How can Hameed Haroon claim with a straight face that the media was being prevented from
reporting on the PTM when his own DAWN was providing front page coverage!

It just does not add up.

Essentially, DAWN and its list of accomplished writers have been reduced as PML N partisans. They have manufactured a false narrative to deflect criticism from Nawaz Sharif’s governance failures, his financial malfeasance, his role in backing extremist and sectarian groups and his failed pork barrel projects.

This manufactured narrative does not provide the details of Nawaz Sharif’s insidious gestation by the military dictator, General Zia ul Haq and casually dismisses decades of collaboration with Generals, judges and Jihadis.

Particularly, DAWN’s narrative about Nawaz Sharif post-1993 is horribly dishonest. Nawaz Sharif’s collaboration with General Kiyani and Iftikhar Chaudhry to derail the previous PPP government is completely white washed. DAWN should know because one of their main opinion makers, Cyril Almeida even incited a coup by General Kiyani against the previous democratically elected PPP government (“Inside Zardari’s Mind” by Cyril Almeida, DAWN 2009-10)