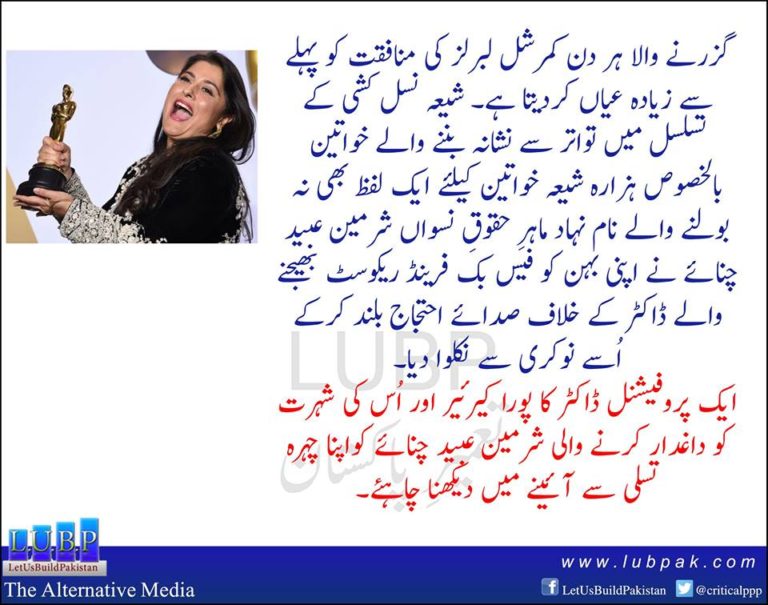 As more details emerge, it is becoming clear that the AKUH doctor engaged in an inappropriate and unprofessional act by sending a Facebook friend request to a patient. From a gender perspective, his act was uncomfortable to his patient. That is the most important thing here.

For many of us, we have to look past how Sharmeen Obaid Chinoy raised this issue and her public persona. We have to look past her sense of entitlement, opportunism, her obfuscation and denial of Genocidal violence against Shia Muslims and her central role in the vicious slander and shaming of Pakistan’s most popular woman leader, the late Benazir Bhutto.

We must not make this issue about Sharmeen just as she unwittingly did (to an extant) with her tweets.

In my earlier post, in spite of my deep reservations with Sharmeen’s dishonest and opportunistic presentation of core social issues, I had mentioned that the topic raised by her merits a proper discussion.

A doctor does not require much information to send a friend request. However, given the situation and the prevalent gender dynamics, which male would have been ok with their sisters, wife, mother or daughters to receive such a request?

Harassment – probably not. Inappropriate – definitely. Does such a doctor deserve to be censured. Yes.

Does Pakistan and the world need to have a debate on the social media etiquettes governing the doctor- patient interaction? Most definitely.

So please look past the elitist and entitled manner in which SOC raised this issue. Look past how she threw the victims of acid attacks under the bus after they served her purpose of achieving Oscar glory. Look past the vicious and tawdry manner in which she shamed a dead woman who also happened to be a beloved leader of millions of non-elitist Pakistanis.

If this debate leads to doctors checking themselves before making their patients feel uncomfortable, then it could prevent harassment in the future.