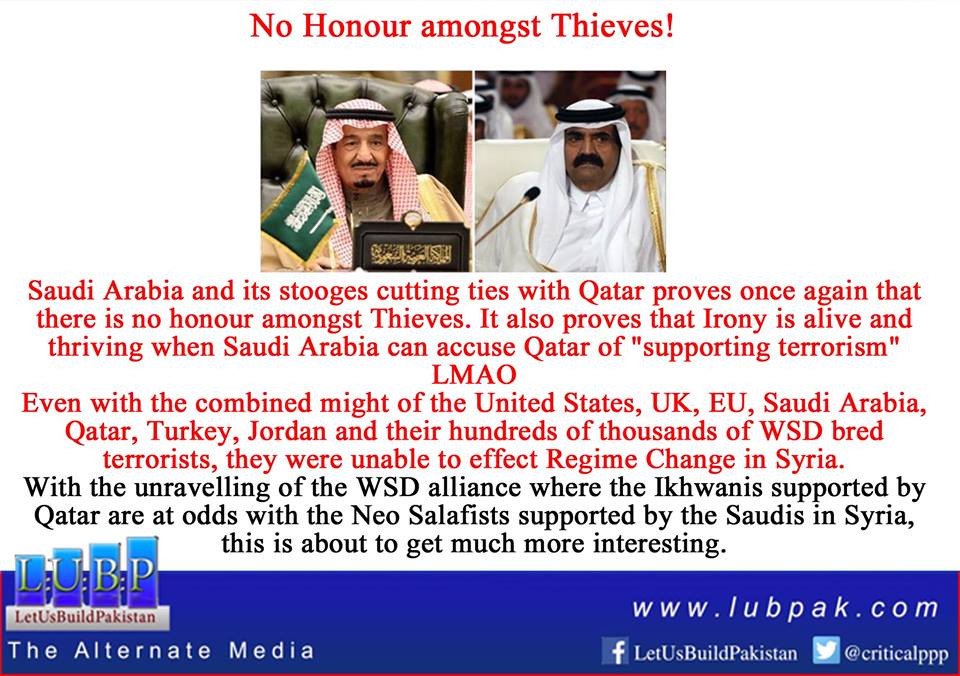 Pakistani “leadership” is facing a serious dilemma due to the infighting between the various Gulf Despot theocracies that are sugar daddies for Nawaz Sharif and his General daddies. Saudi Arabia is Nawaz Sharif’s closest master.

Saudis offered Nawaz Sharif a palace when he cut a deal with military dictator General Musharaf and ran away to Riyadh like the coward that he is. Saudi Arabia also offered General Raheel Sharif a job for going easy on their kept man Nawaz Sharif. General Pasha and General Kiyani also depend on UAE and KSA for “benefits”. And then there is Qatar…

Qatari despots who support ISIS also support the crooked corruption deals of the Nawaz Sharif dynasty. It is funny to see PPP socialite and backstabber, Sherry Rahman weighing in on this. She is the one who promotes a Saudi proxy and Deobandi hatemonger, Tahir Ashrafi as a “moderate”! She and her posse of commercial liberals always deflect criticism from Gulf theocracies by dragging in Iran and peddling false and dishonest binaries.

Who is going to guide Pakistani oligarchs like #MNS in making the correct decision? Will he defer to Uncle Sam or Aunty China?