Home  »  Original Articles   »   The assassination of Russian Ambassador in Turkey: A few points to ponder – by Syed Hasnain Baqri 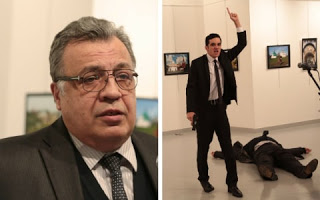 Words of condolences and condemnations are pouring in from around the world after an off-duty Turkish riot Police Officer Mevlut Altintas shot dead the Russian Ambassador Andrei Karlov, 62, in Ankara, Turkey yesterday, as he delivered a speech. The assassin had gained an easy entry to the photo exhibition sponsored by the Russian Embassy and had shot the Russian Ambassador multiple times, which was captured in a video that went viral on the social media minutes after the fatal attack.

The assassin was heard shouting in Turkish – “We die in Aleppo, you die here!! You will not taste security until our towns are secure! Do not forget about Syria and Aleppo!  Whoever is part of it will get their punishment!!

It is common knowledge that Russia and Turkey, which have both intervened militarily in Syria, are on the opposite sides of the brutal Syrian Civil war that has witnessed the massacre of millions of Syrians and displaced millions who have fled to Europe creating the largest refugee crisis the world has ever seen since 2011. While Russia has helped out Syrian President Bashar Assad to wipe out the western backed terrorists and rebels and to recapture the terrorist-held East Aleppo, Turkey has been involved in covertly arming and funding the rebels and terrorists in a bid to oust the Syrian President Assad. Turkey has also opened its borders for the Sunni Muslims from nearly 80 countries who have flocked to Syria to join ISIS, Al Nusra and other terrorist gangs in an attempt to fight  Assad and to illegally occupy Syria along with Iraq.

Now, the question is why did the Turkish Forces shoot the assailant instead of capturing him alive, right after the cowardly attack on the Russian Ambassador?? He could have been easily overpowered by the Turkish Forces as he was in possession of only a single gun.

This is the first deadly attack on a senior diplomat that was seemingly motivated by the brutal war in Syria and was a direct fallout of the crushing defeat of the US-UK-Israel-Saudi Arabia-Turkey backed ISIS, Al Nusra and other terrorists in Syria. And if this is indeed a retaliatory attack for the defeat of the ISIS terrorists and rebels, then why hasn’t anyone targeted the Israeli ambassador for the Gaza genocide of 2014?

The bottomline is there is no justification for such a cowardly attack on the Russian Ambassador and chances are high that this despicable act was meticulously planned and successfully executed by Turkey, Israel, America or Saudi Arabia.