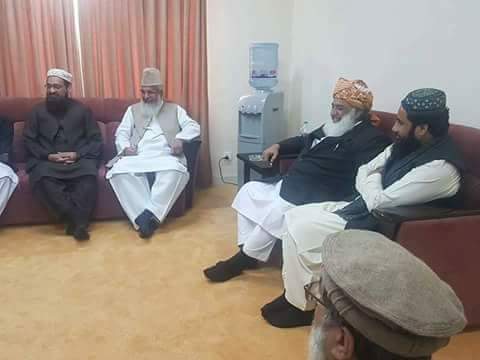 I posted a video earlier today about someone mocking the Deobandi hate Kalima against Shias. It was pointed out to me in private that the Deobandi anthem in question was the backdrop for a macabre recording by the Taliban regarding yet another act of #ShiaGenocide perpetrated by them in Northern Pakistan.

Something bothered me about this post that I had made and thanks to a friend, I realised that today I adopted the same flippant approach that I pillory regularly on my wall. That post has been deleted by me.

For someone in Pakistan, hate anthems like the Deobandi Kalima are the backdrop of massacres, target killings, bomb blasts and similar violent acts of terrorism by Deobandi affiliates of ISIS.

Simply mocking it will not solve the problem; now we have another elected member of parliament in Pakistan who subscribes to this hate article. We have Maulana Fazlur Rehman of JUI – admired by some Sufyani liberals of Pakistan – who is giving political cover to his fellow Deobandi terrorists who subscribe to this hate Kalima.

It is not mockery. The simple reason is that the makers of this anthem will not mind dancing to its tune, rather they will enjoy it. This is worse than apathy or inaction.

Just as chanting it reeks of sadism, mocking it indicates masochism or cruelty – depending on where you stand. Here are the two the dimensions of this chant:

In terms of ideology it represents not just hate but a stated philosophy to eliminate all individuals who –through this chant or otherwise- have been declared infidels by virtue of being heretic.

This is a chant that communicates

“you will not have safety, we are out to get you.”

In terms of practice, it represents acts of brutal violence and mass killings in Pakistan perpetrated to the refrain of same chants. Preventing these mass atrocities is a core national security issue and a core moral responsibility of all citizens in today’s Pakistan.

The act in question does nothing to deter or shame the acts of violence or their perpetrators. It just ridicules the subjects of this hate anthem.