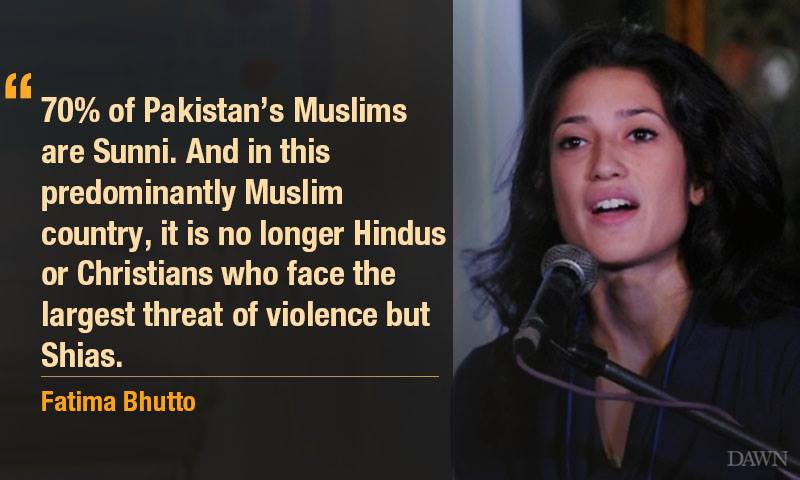 NEW DELHI: Saying Shias have overtaken Hindus and Christians as targets of sectarian killings, Fatima Bhutto has said that Pakistan has become a country of ghosts.

“They are everywhere, the victims and the perpetrators both,” she wrote in The Hindu on Friday.

Ismailis, she said, were a peaceful community of Muslims who shared a closeness with the country’s Shia minority and are thus victimised. “Seventy per cent of Pakistan’s Muslims are Sunni. And in this predominantly Muslim country, it is no longer Hindus or Christians who face the largest threat of violence from orthodox and radicalised groups but Shias,” Ms Bhutto said.

“We cannot look at the dead too long — only long enough to check that what ended their lives will not end our own. Fatal lists swing wildly from the specific to general. Are you Hazara? Are you Shia? Are you an Ahmadi? Any of the above will get you killed.”

Implicitly slamming the murder of bloggers in Bangladesh and Pakistan , she said: “Soon, are you a liberal? Supporters of Imran Khan’s Pakistan Tehreek-i-Insaf party, young Pakistanis living inside and outside the country, already troll the Internet attacking anyone vaguely critical of their values… Every journalist that criticises their party is a ‘lifafa journo’, implying the only reason to raise a bad word against them would be money, rather than common sense.

“Soon, like in Bangladesh, you will be asked: Are you a writer?

“There is violence everywhere here — in threats and in action. Everywhere.”

Every province that suffers the horrendous attacks suffers amnesia too. “Sindh’s phenomenally corrupt government mounted a defence against its sin of not protecting the 43 dead — terror happens all over the country, the chief minister said, it happens in Khyber Pakhtunkhwa and Punjab too.”

Ms Bhutto noted that Pakistan had ended its moratorium on the death penalty in December. In the last six months, it has hanged over 100 people on death row. Of the 8,000 prisoners on death row in Pakistan, more than 1,000 have exhausted all their appeals.

“This was the response after the brutal Peshawar school attack: kill death row convicts and we will be safer. But since then, we have only had more blood.