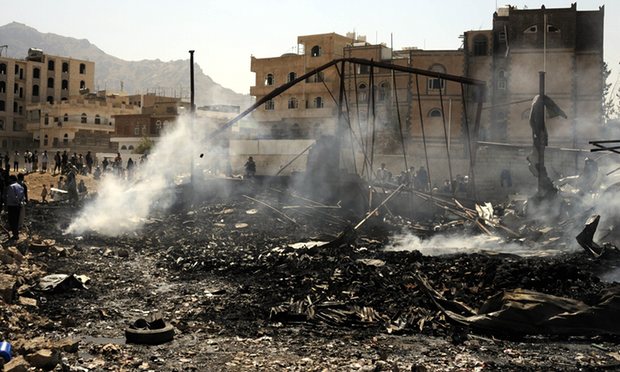 The British government must challenge Saudi Arabia over whether it is using UK weapons to breach international humanitarian law by launching indiscriminate airstrikes in Yemen, a leading lawyer has told the UK arms export control select committee.

Phillipe Sands QC, of Matrix Chambers, said that, faced with compelling evidence of what is happening in Yemen, ministers had a legal duty to go back to the Saudi government to check whether its assurances about the use of UK weaponry were valid.

The UK has licensed the sale of £6.7bn of weaponry to Saudi Arabia, including an estimated £2.8bn since airstrikes against Yemen began in March 2015. The conflict is believed to have killed more than 2,800 civilians, including at least 700 children, many of them in airstrikes. A fragile ceasefire exists in the country.

Sands, a war crimes expert, claimed ministerial statements showed the British government had not pressed the Saudis to explain what actions they were taking to ensure their targeting was designed to prevent civilian casualties.

He said that, regardless of Saudi intent, the legality of Saudi actions, and in turn UK arms exports licences, turned on whether the Saudi actions were causing disproportionate civilian casualties and thus in breach of international humanitarian law.

But in a bid to rebut Sands’s claims, the government submitted a memorandum to the committee on Wednesday, saying the Saudis were not targeting civilians.

In its fullest public defence of Saudi military strategy in Yemen, the memorandum states: “In carrying out analysis the Ministry of Defence had access to a wide range of information, including Saudi-led coalition operational reporting data, imagery and other reports and assessments including UK defence intelligence reports and some battle damage reports.”

It concludes: “The government is currently satisfied that extant licences for Saudi Arabia are compliant with export licensing criteria.”

Faced with allegations of civilian targeting – including by a UN inquiry – Saudi Arabia has set up an internal inquiry into its targeting process. Charities have said the inquiry has no credibility and is not investigating individual instances when civilians have been hit.

Steve Doughty, a Labour member of the committee, said: “It is odd that the UK government can assert civilians have not been targeted since this flies in the face of detailed evidence given to the committees by numerous agencies on the ground in Yemen. As a leader in the fight for an arms trade treaty and a cluster munitions ban, it is vital that the UK government upholds international law.”

Sands claimed that it was likely that as many as 80% of the Saudi airstrikes were not planned, but were ad hoc so-called “dynamic” strikes.

David Cameron has resolutely denied that the UK is integrated into the Saudi bombing campaign, telling MPs in January: “Just to be absolutely clear about our role: we’re not a member of the Saudi-led coalition, British military personnel are not directly involved in the Saudi-led coalition’s operations, personnel are not involved in carrying out strikes, directing or conducting operations in Yemen or selecting targets and we’re not involved in the Saudi targeting decision making process.”

But Sands said it was wrong to suggest the UK government was not involved in the conflict since it was present in the joint planning cell, and providing weaponry.

A report produced by the UN Office for the Coordination of Humanitarian Affairs and analysing violence in Yemen between 1 January and 31 July 2015 showed that explosive weapons had killed and injured 4,493 civilians.