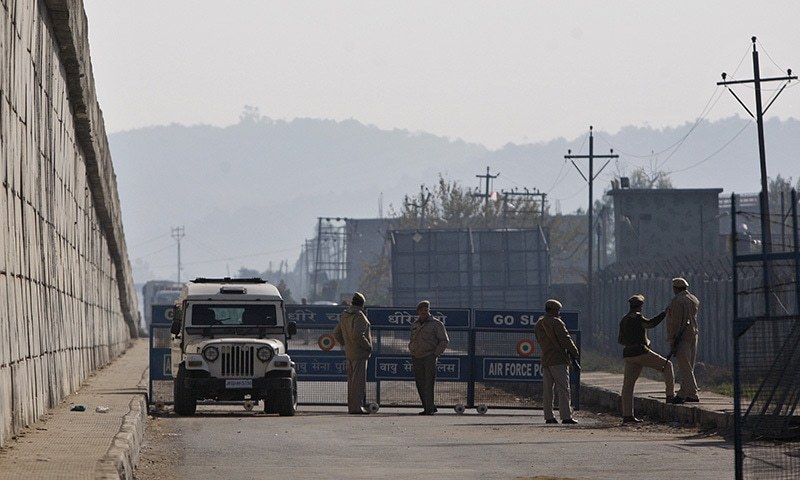 Indian security forces set up a security road barrier outside the airforce base in Pathankot – 430 km from Delhi. Image and caption courtesy of AP

Unfortunately, there seems to be a growing lobby in Pakistan that is working hard to obscure and obfuscate the role of this nexus in acts of both domestic and international terrorism –  in this case, the terrorist act of Jaish could lead to dangerous consequences in the region.

This lobby actually promotes anti-Ahmadi, anti-Shia hate clerics like Tahir Ashrafi and Mufti Naeem who is the political face of Deobandi terrorist groups and the liaison between Gulf donors and ISIS-affiliated terrorists groups in Pakistan.

This lobby includes Pro Establishment (Fake) liberals who deliberately obscure the role of the takfiri terror network. At times, this (Fake) liberal mafia actually promote and white washes hate mongering clerics like Tahir Ashrafi. At other times, this lobby leaves out the role of the far more larger network of Deobandi terrorist groups like Jaish, ASWJ-LeJ, Jundullah and Taliban and instead starts attacking the Shia and Sunni victims of takfiri terrorism.

It is because of such obfuscations that Jaish still remains in a position to continue its terrorism.

This also raises the important questions of continued links between the Pakistani establishment and connected Deobandi terrorist groups like Jaish and ASWJ-LeJ. Elements within the PML N establishment like Law Minister Rana Sanaullah continues to be a link between the PML N government and Deobandi terrorist groups like ASWJ-LeJ.

The media needs to ask the question:

It is now crucial that Pakistan’s PM Nawaz Sharif has to take action against Rana Sanaullah and Chaudhary Nisar who continue to maintain links with banned terrorist organisations like ASWJ-LeJ. Since its formation in 2000, Jaish-e-Mohammad is closely linked with ASWJ-LeJ.

This also raises the question of Pakistan’s establishment’s soft corner for terrorists.
Was it not the Supreme Court of controversial and corrupt former Chief Justice that also freed scores of Deobandi and Salafi terrorists including the leader of LeT/JuD.

H S Dhillon, Additional Director General of Police, Punjab, told AFP the operation at the base was still ongoing at 04.15 GMT.

“We are searching the area. Two of the attackers were killed in the initial exchange of gunfire but we can’t confirm if more have been killed,” he said, in response to reports that four gunmen had been killed.

“Five to six security personnel were injured and they have been evacuated to hospital.”

Pathankot in India’s Punjab province is close to the border with Pakistan.—Google maps

Local television stations showed images of helicopters surveying the area, while elite National Security Guard commandos have been flown in to flush out the attackers.

A top security official, who asked not to be named, alleged that the gunmen were believed to be from the Jaish-i-Mohammad group, describing them as suicide attackers who breached security at the base in the northern state of Punjab while wearing army uniforms