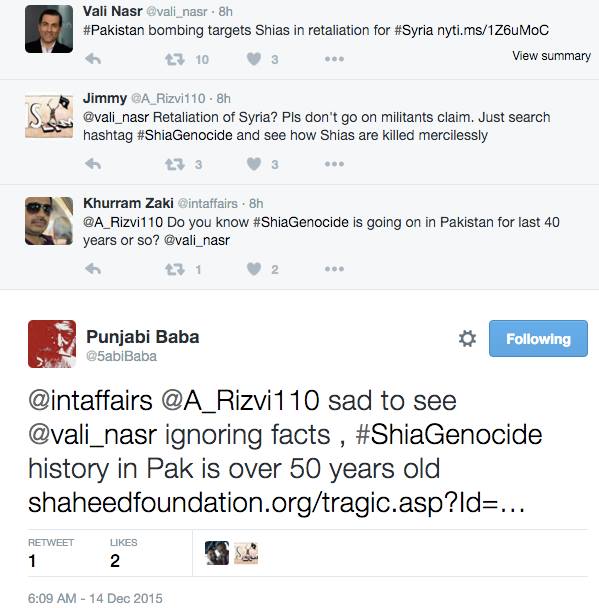 These tweets are an example of how ISIS apologists like Kenneth Roth justify suicide attacks against Shia civilians in Iraq. His tweet highlights his perverted rationale for #ShiaGenocide.

Amidst the ongoing tragedy in Parachinar, it is good to see human rights activists take on these ISIS apologists like HRW representative Kenneth Roth and Salman Masood of Pakistan.

Todays attacks on Pashtun Shias by the Takfiri Deobandis of the Taliban/ASWJ-LeJ is part of a campaign against Shias in Pakistan that goes back to the 1980s. For refusing to prostitute themselves, Pashtun Shia Muslims of Parachinar have been regular attacked and massacred since the 1980s. Yet, this Pakistani ISIS apologist Salman Masood attempts to dishonestly justify today’s massacre of Pakistani civilians.

Salman’s apologist drivel is based on outdated news that was recently published by ET and is about Pakistani volunteers in Syria, who along with German, Australian and Kurdish volunteers (belong to Sunni, Shia and Christian backgrounds) are taking on ISIS. The Pakistani volunteers in Syria are protecting the shrines of Bibi Zainab; the grand daughter of the Holy Prophet. Such endeavours are of course of no importance to the closet Deobandi urban upper middle class ISIS apologists of Pakistan.

As per Salman’s limited logic, there exists an equation between these volunteers and those Takfiri Deobandi terrorists who killed close to 30 Pashtun Shias in Parachinar today. Furthermore, Salman is correctly called out for his disgusting rationale. The Syrian civil war by Al Qaeda and later on ISIS started in 2011.

How does Salman Masood justify the acts against Shias in general and Pashtun Shias specifically that took place before this?

Does ISIS have a time machine which they used to travel back in the past to eliminate the only real resistance to them while NATO, Turkey and Saudi Arabia continue to facilitate ISIS today.