Let’s deal with the Devil: we should work with Vladimir Putin and Bashar al-Assad in Syria 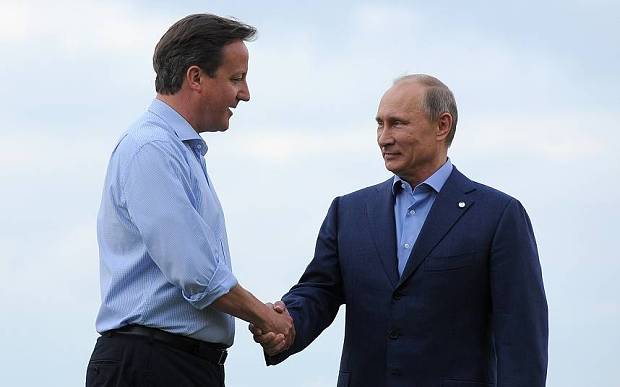 In the last couple of days, young people have been coming up to me in the street and asking in an accusing way: “Oi, Boris, why did you vote for war?” And I try as ever to explain that I was not voting for war. There currently is a war that is taking place in Syria.

That bestial conflict has already claimed a quarter of a million lives. I was voting to stop the war. I was voting for peace. “Yeah,” they say, “but what about the bombing? What about all the innocent people who will die? It will be their blood on your hands.”

To which I respond that innocent lives are being lost now: tens of thousands of people butchered just because they are women, or disabled, or gay, or because they belong to the wrong strand of Islam. I don’t want to have them on my conscience, and I don’t want these sickos from Daesh/Islamic State of Iraq and the Levant (Isil) to continue to exult in their so‑called caliphate, and to be allowed indefinitely to promote their terrorist campaigns.

When the House of Commons finally gave the go-ahead for air strikes last week, no one cheered; no one even hear-heared. No one is approaching this with the slightest sense of jingo or enthusiasm. We want to get on with whatever is the best and fastest way to bring peace to Syria. And since we all know that cannot be achieved by bombing alone, we need to think much more creatively about the coalition we could build.

That brings us to Vladimir Putin. I was in Paris at the end of last week, and the Russian leader’s face glowered sulkily from every billboard. “Poutin”, said the headline, “Notre nouvel ami”. Many French people think the time has come to do a deal with their new friends the Russians – and I think that they are broadly right.

The face of Vladimir Putin replaces his predecessor on a Russian advertisement  Photo: Reuters

“Despite looking a bit like Dobby the House Elf, Putin is a ruthless and manipulative tyrant”

Look, I am no particular fan of Vlad. Quite the opposite. Russian-backed forces are illegally occupying parts of Ukraine. Putin’s proxy army was almost certainly guilty of killing the passengers on the Malaysia Airlines jet that came down in eastern Ukraine. He has questions to answer about the death of Alexander Litvinenko, pitilessly poisoned in a London restaurant. As for his reign in Moscow, he is allegedly the linchpin of a vast post-Soviet gangster kleptocracy, and is personally said to be the richest man on the planet. Journalists who oppose him get shot. His rivals find themselves locked up. Despite looking a bit like Dobby the House Elf, he is a ruthless and manipulative tyrant.

Does that mean it is morally impossible to work with him? I am not so sure. We need to focus on what we are trying to achieve. Our aims – at least, our stated aims – are to degrade and ultimately to destroy Isil as a force in Syria and Iraq. That is what it is all about.

Our mission is to remove an evil death cult, to deprive their organisation of the charisma and renown that goes with controlling a territory of some 10 million people. We need to end their hideous administration of Raqqa, with its torchings and beheadings. We need them out of Palmyra, because if Syria is to have a future then we must protect its past.

We cannot do that without terrestrial forces. We need someone to provide the boots on the ground; and given that we are not going to be providing British ground forces – and the French and the Americans are just as reluctant – we cannot afford to be picky about our allies.

We have the estimated 70,000 of the Free Syrian Army (and many other groups and grouplets); but those numbers may be exaggerated, and they may include some jihadists who are not ideologically very different from al-Qaeda.

Who else is there? The answer is obvious. There is Assad, and his army; and the recent signs are that they are making some progress. Thanks at least partly to Russian air strikes, it looks as if the regime is taking back large parts of Homs. Al-Qaeda-affiliated militants are withdrawing from some districts of the city. Is that a bad thing? I don’t think so.

Am I backing the Assad regime, and the Russians, in their joint enterprise to recapture that amazing site? You bet I am. That does not mean I trust Putin, and it does not mean that I want to keep Assad in power indefinitely. But we cannot suck and blow at once.

At the moment, we are in danger of treating our engagement as if it were some complicated three-sided chess game, in which we are trying to neutralise the Islamists while simultaneously preventing Putin from getting too big for his boots. If we try to be too clever, we will end up achieving nothing.

This is the time to set aside our Cold War mindset. It is just not true that whatever is good for Putin must automatically be bad for the West. We both have a clear and concrete objective – to remove the threat from Isil. Everything else is secondary.

Think of all those planes above Syria – some for the Assad regime, some against the regime, some against Isil, some against the non-Isil rebels. It is absurd. The best hope of getting rid of Isil is an agreement between all the powers – America, Russia, France, Britain, Turkey, Saudi Arabia and the rest – to take them out, together with a timetable for Assad to step down and a plan for a new Syrian government.

Everyone in Paris last week seemed familiar with one quotation from Sir Winston Churchill. When Hitler invaded the Soviet Union, Churchill decided to qualify his lifelong hatred of communism. “If Hitler invaded Hell,” said Churchill in 1941, “I would make at least a favourable reference to the Devil in the House of Commons.” And as he foresaw, it was the Russians who did the most to help us win the war.