Home  »  Newspaper Articles   »   On Pak-China Friendship and CIA-ISI feud: The Pamir Knot and beyond – by Dr Mohammad Taqi

The relationship between the US and Pakistani intelligence agencies appears to be moving from playing uneasy footsie to a fairly sordid affair. The blowing of the CIA’s Islamabad station chief’s cover, allegedly at the behest of the host country’s spooks, has not gone down well with the US. That this happened on the eve of the Chinese premier Wen Jiabao’s much-trumpeted visit to Pakistan raises a question if Pakistan is using grandpa Wen to help fend off the ‘big bully’ US.

The Chinese leader’s visit, in turn, came on the heels of the US strategic review of the Afghan war chiding Pakistan and asking it to do more to fight the Islamist terrorists operating from within its borders. This review has not set any benchmarks — at least publicly — to gauge Pakistan’s success in what is being demanded of it. Additionally, President Barack Obama, Secretary of State Hillary Clinton and Defence Secretary Robert Gates have reiterated in separate statements their concern about Pakistan’s role in the Afghan war.

Wen Jiabao obviously did not disappoint his hosts, and speaking to the joint session of the Pakistani parliament said what they really wanted to hear: “Pakistan was at the front of the international fight against terrorism and made big sacrifices and important contributions, which were obvious to all. The international community should affirm that and give great support as well as respect the path of development chosen by Pakistan. The fight against terrorism should not focus on specific religions or ethnic groups, but rather on eradicating the root factors breeding terrorism.” 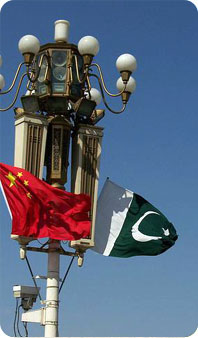 While appearing to be a shot in the arm for the Pakistani regional policy, Mr Jiabao’s speech reinforces what is already known about Sino-Pak relations and the Chinese ambitions in the second decade of the 21st century. The Pakistani policy planners, especially those directly or indirectly associated with its ruling establishment, take a vicarious pride in the strides China has made and tend to believe that in the coming decade it would surpass the US as a global power.

However, the Chinese quest to revive the land-based Silk Route and develop jumping boards to Africa like the Gwadar port, point to its significant handicap in overcoming its geographical limitations. Resource-hungry China might take more than 10 years to develop a navy to be competitive with South Korea and Japan, supported by the US, even in the Pacific Rim. It is therefore, imperative for China to develop cheap and relatively direct access to resources, especially fossil fuels, from Central Asia, the Persian Gulf and Africa.

There is nothing really ideological or fraternal about the Chinese investments in Pakistan, as some Pakistani newspapers would like us to believe. Interestingly, while the Pakistani media has a knack for comparing everything to India, it has really remained mum over premier Jiabao’s visit to Delhi. A right-wing contemporary in its editorial praising China for its ‘stellar words and deeds’ vis-à-vis Pakistan opted to black-out the fact that just days ago the Chinese leader was quoting from the Upanishads, eulogising Mahatma Gandhi and buoyantly claiming Manmohan Singh’s friendship. With about $ 60 billion in exports, China has become India’s largest trading partner. By 2015, this sum is expected to rise to around a whopping $ 100 billion. The $ 30 billion of Chinese investment in Pakistan over the next five years does not look that massive after all. The point remains that it is the confluence of economic and geo-strategic interests — not words from scriptures or leaders — that dictate the Chinese or any other nation’s interest in Pakistan and for that matter in India.

That China will expand manufacturing exchanges, develop the transport and (nuclear) energy sectors in Pakistan, and even do a currency swap agreement, is not moot. However, what it might not tolerate is very similar to the world demands about countering the terror networks operating in and out of Pakistan. For China to have viable, uninterrupted resource supply routes from Central Asia and through Pakistan, it has to have a western border free of the jihadist menace. To metamorphose from a global moneylender to a global power, China will be confronting the question of how to tackle jihadism sooner than later. It may have saved the skins of the likes of General Hamid Gul — even at the UN level — but doing business in the global economy would entail China actually policing such characters rather than encouraging or protecting them.

The Chinese global interests, therefore, are more congruent with the US, and perhaps even India, than a Pakistani establishment with a jihadist mindset fossilised in the past. Internally, China is extremely sensitive about any socio-political upheavals that could pitch its impoverished central and western provinces against the affluent coastal regions and potentially lead to the unrest prevalent on the eve of Chairman Mao’s revolution. Issues like Tibet and Uighur autonomy are thus taken quite seriously, and dealt with harshly, by the Chinese. Moreover, China’s status as the world’s ATM machine is hugely dependent on its trade with the US and western consumer societies. While it would love to see the Pamir Knot and northern Silk Road revived with economic vigour, China would not be interested in undoing the Gordian knot of Afghanistan with the tip of its sword and neither would it give Pakistan a free hand to do so — a fact not lost on the Pak-Afghan policy planners in the US.

The New York Times (NYT) report that the US military seeks to expand raids inside Pakistan appears to be part of this seemingly endless game of analysing the projection of power, perception of strength or weakness and posturing of the geo-strategic players. Speaking to this writer, a CENTCOM spokesman, Lieutenant Colonel Michael Lawhorn cited the International Security Assistant Force statement, which categorically rejects the NYT report and claims everything to be hunky dory between the US and Pakistan: “There is absolutely no truth to reporting in the NYT…Cross-border coordination has and continues to disrupt and dismantle insurgent networks in select areas, with significant operations on both sides of the border removing large numbers of insurgent leaders and fighters.”

The last part of the statement is ambiguous about who exactly is conducting those raids but seems to indicate that for now the US planners have opted to ignore grandpa Wen’s words and innuendo in Pakistan. They seem to be focused more on the great-grandpa Hu Jintao’s Washington, DC visit next month.(Source)