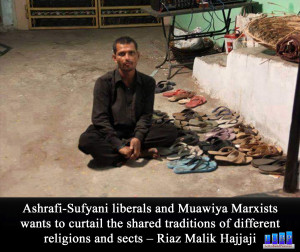 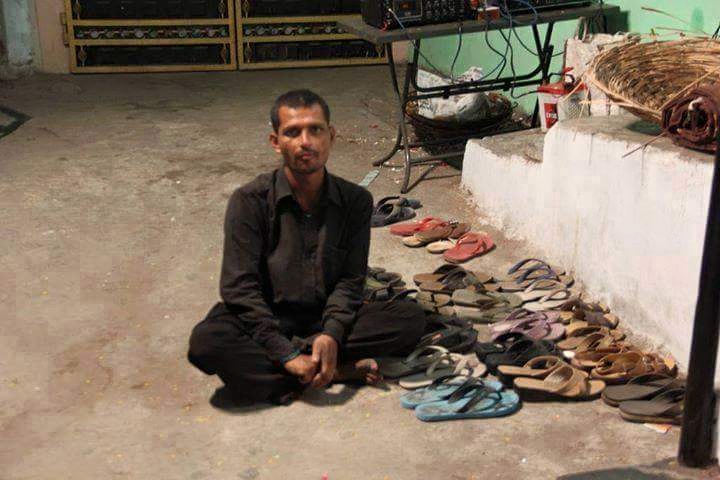 His name is Rajesh. He is a Hindu who loves Imam Hussein (as) and Al Abbas (as). He comes every Muharam at Hazrat Abbas Darghah in Hyderabad, India and sits outside and takes care of slippers & shoes of Azadars.

Amongst the elitist “civil society” types, there are some Ashrafi-Sufyani liberals and Muawiya Marxists who want to curtail the shared traditions of different religions and sects. These disguised sectarian bigots are easy to spot during Muhurram with their selective prescriptions (stay inside, stop your traditions blah blah blah) and out-dated binaries.

The idea of Sunnis, Shias and Hindus jointly commemorating Imam Hussain’s sacrifice during Muhurram is an anathema to these disguised bigots who disguise themselves as left-liberals but are really Jamaatiyas at heart. All the hate and jealousy against the family of the Holy Prophet spews out during Muhurram; couched arguments that are now quite familiar

1. ooohhh, they should stay inside -they have no right to take out processions.

Suggested Response: yes, that right is only reserved for terrorist hate rallies. Banning public processions is the hallmark of fascist, supremacist tinpot Gulf monarchies that you all love to lick the boots off

2. No one should remember the dead after 3 days

Suggested response: unless that dead happens to be your relative or some selective choice that appeals to your Jamaati core.

There are many arguments but lets get back to the post.

In Pakistan, this devotee of Ghazi Abbas would have placed himself in the first line of defense. By posting himself at the entrance of a Majlis-e-Aza, he is the most vulnerable to a suicide attack and firing by brainwashed radicals from ASWJ-LeJ or the equivalent Indian radical Deobandi group.

These acts of immense courage and shared traditions are rarely the incidents that one hears from many of Pakistan’s elitist “liberals” who still use dishonest binaries like “Sunni vs Shia” to deliberately obfuscate the one-sided Takfiri Deobandi violence against Sunnis, Shias, Hindus, Christians and Ahmadis.

These are the elitists who will berate the victims of Takfiri violence while being mostly mute against the perpetrators from ASWJ-LeJ/Taliban/Jundullah/Ahrar. These are the hypocrites who will campaign against the licensed, public processions of Ashura and Eid Milad un Nabi, on 2-3 public holidays per year but stay mute about the days long Tableeghi Jamaat Ijtima at Raiwand that causes traffic jams for nearly a week in Lahore.

These are the hypocrites who will rail against the annual midnight procession for Imam Hussain in the ancient quarters of Lahore and Karachi but will stay silent when banned terrorist groups block city streets every Friday afternoon, 52 times a year, in order to facilitate the fascist, supremacist hate rallies by using prayer as an excuse.

These are the fake liberals who will rarely, if ever, highlight the security concerns facing Sunnis, Shias, Hindus, Ahmedis, Transgenders, Atheists and Christians who attend Ashura processions and instead blame them for city closures – as opposed to the ASWJ-LeJ terrorists who have created the security situation in the first place.

Will these hypocrites ever realise that worldwide, 7,000,000,000+ human beings are subject to strenuous airport security checks because of the acts of Saudi-funded Wahabi/Salafi terrorists.

These hypocrites who scoff and abuse the devotees of Ghazi Abbas will end up in the dustbin of history. Hajjaji will like to kiss the feet of this Hindu Azadar (Take that you Puritans) Your devotion, courage and selflessness will live on for eternity.