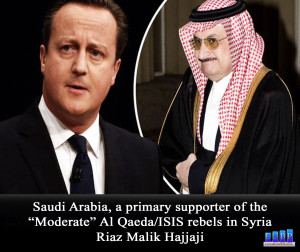 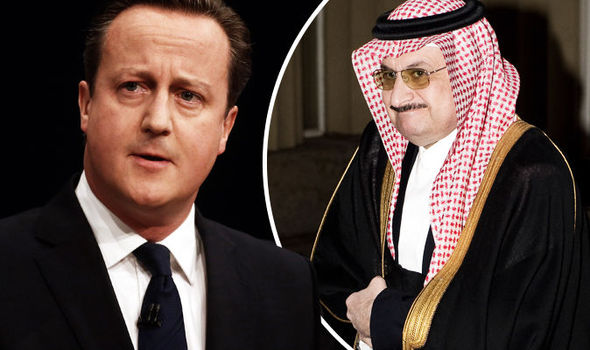 Saudi Arabia wants Great Britain to bow down even further.

“The furious prince also railed against an “alarming change in the way Saudi Arabia is discussed in Britain”, warning that the wealthy kingdom would not be “lectured to” and urged respect for its strict system of Sharia law.”

After the Norman invasion in the 11th century, the Wahabi/Salafi/Deobandi invasion of Britain is well underway. Jazakallah!

Now we know that Nawaz Sharif is not the only Saudi Stooge Prime Minister and British PM David Cameron is well on this way.

My, my what will our desi “liberals” have to say about this? Well as long as there is some spare change for elitist and exclusivist fashion shows and “literary” festivals in 5-Star hotels, they will be just fine.

The next panel on extremism at the Lahore/Karachi literary festival might well be chaired by Prince Ibne Salman after he is done butchering a few more Yemeni kids; you know to teach them democracy!

Back to Blimey, The blind Saudi head pontiff will teach the British that John Stuart Mills was really an apostate – who had Shia leanings. So his grave has to go. As does Westminister Abby because its causing, whats the word for it, Polytheism.

The works of Byron, Shelly and Keats will be replaced by the polemics of Bin Bazz, Qaradawi and Ibne Taymiyah! Shelley was of course an Islamophobe because of his poem “The Revolt against Islam” (which actually has little to do with Islam)

Daud Al Qamar Oounn aka David Cameron has already defiled a dead pig. He might get a pass for that from his Saudi sugar daddies.