Home  »  Original Articles   »   When it comes to spinning Syria, the Pakistani establishment has nothing on the current US administration 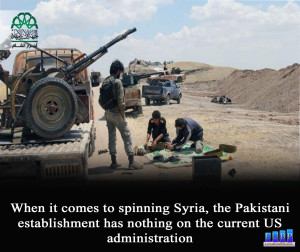 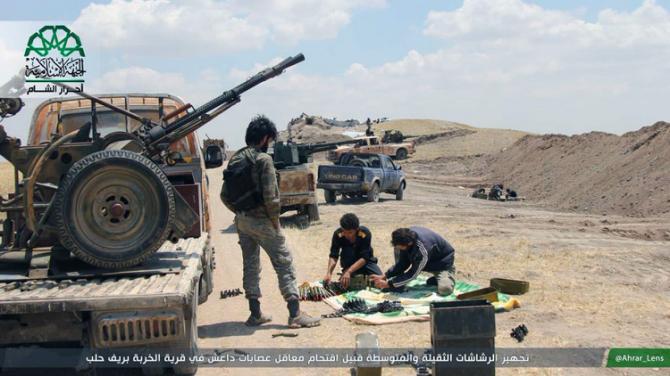 In this image posted on the Twitter page of Ahrar al-Sham on Aug. 13, 2015, fighters from Ahrar al-Sham prepare weapons ahead of an attack on Islamic State group positions in Aleppo province, Syria. The group has vowed to defeat what it calls Russian “occupation” of Syria after Moscow began launching airstrikes on insurgents last week. (Ahrar al-Sham Twitter page via AP)

Welcome to the Good Al Qaeda vs Bad Al Qaeda binary where the US media is currently (attempting to) spinning Ahrar ul Sham as the “moderate” “secularly-inclined” Al Qaeda (lite?). Yes, the very group that lashes those who miss Friday prayers is being spun as the “moderate rebels”.

“The whipping, captured on video as dozens of men and boys watched, was carried out two years ago by the ultraconservative Ahrar al-Sham, or Free Men of Syria, an Islamic militant group with links to al-Qaida.

But since then, the group has been shifting tactics, seeking to portray itself as a moderate force fighting both President Bashar Assad’s troops and the extremists of the Islamic State group.”

Pakistan’s Ashrafi liberals correctly criticise the Pakistani establishment for its decades old “Double Game” on both opposing and supporting ISIS/Al Qaeda affiliated Deobandi terrorist groups like the Taliban and ASWJ-LeJ. However, when it comes to Saudi Arabia or America supporting and financing Al Qaeda in Syria and Yemen, these same “liberals” go mum.

One Pakistani “liberal”, formerly from the Jamaat-e-Islami/PML N simultaneously censured the United States for selling weapons to Pakistan and within a few weeks, recommended that the US sucks up to Saudi Arabia even more! I guess you can take the man out of Jamaat Islami but you can never take the Jamaati out of the man. The same “liberals” never, ever criticise Saudi Arabia’s man in Pakistan, the “anti-establishment” Saudi stooge Prime Minister Nawaz Sharif.

Even the Pakistan military (under Raheel Sharif) has had more success fighting the Taliban than the US-Saudi-Turkey-UK-Qatar and their “moderate” Al Qaeda rebels have had in fighting ISIS in Syria and Iraq. And given that all the Saudi-sponsored extremist Deobandi and Salafi terrorist groups in Pakistan are not being held to account, the criticism against the Pakistani establishment for being selective in the “Zarb-e-Azb” operation is fair criticism. Certainly, the Zarb-e-Azab operation must be criticised for not going after ASWJ-LeJ in Sindh, LeT in Punjab and for not doing enough against the Afghan Taliban.

However, just as the Good vs Bad, Afghan vs Pakistani Taliban is an utter bullshit binary (copyright Hajjajism), so is that of the Moderate Al Qaeda rebel!

But the selectiveness of the Zarb-e-Azab operation pales in comparison to the selectiveness of NATO and its allies in “combatting” ISIS. The “Regime change” policy for Syria has seen at least $500 million of US tax payer money being spent on (indirectly?) training the very Al Qaeda “moderate” rebels that have allowed ISIS and Al Qaeda to actually grow in size and influence in not just Syria and Iraq but in Yemen and Libya as well.

These are the areas when the Uncle Sam-Ashrafi “liberals” of Pakistan go mum.

When the Pakistani establishment currently blames India for the Taliban, we all take it with a pinch of salt. But we will need much more than a pinch when Syria and Russia are blamed for creating ISIS as opposed to Saudi Arabia, Qatar, Turkey and Jordan.

When one sees the outrage over the Russian bombing of ISIS and Al Qaeda in Syria, one is reminded of the petulance and outrage of Nawaz Sharif, Imran Khan, Shahbaz Sharif, General Hamid Gul, Hamid Mir etc when there were token drone strikes against the Taliban

Post script: I am adding a comment to this post. While I may disagree with Jonathan on the role of the US media in recasting Al Qaeda as “moderate rebels”, his comment stands on its own merit.

In the words of Don Barzini (not to be confused with the Iraqi Kurdish leader), in the film, “The Godfather” “after all, we are not communists” and therefore must allow for different points of view.

“It is a gross exaggeration to say the US media is trying to recast Ahrar al Sham as some kind of boy scout group. The head of the group wrote an op-ed in the Wash Post attempting to do that and no one went for it. That a member of Congress tries to do the same is a function of our right to free speech. But to paint the entire US media as trying to rehabilitate a group that makes common cause with al Qaida is just plain wrong.”