“Terrorism was taught by the state not the madrassahs”. A very rich statement by Mufti Naeem, the head cleric of Binori Town Karachi. I would encourage all my fellow Pakistani to know and remember the following facts:

Binori Town, in the heart of Karachi, is a symbol of the Mullah-Military alliance set up to wage the Afghan and Kashmir jihads. In 1979, the then head of Binori Town, Yousof Binori was appointed Chairman of the Council for Islamic Ideology by Zia ul Haq. It is also the FIRST madrassah in Pakistan to issue a fatwa calling Shia Kafirs (apostates and therefore deserving of murder); one that is in circulation on the streets today and is quoted by the ASWJ to justify the Shia genocide.

Binori Town has been a major recruitment centre for the Kashmir and Afghan “Jihad”. Its alumni list is a catalogue of the worst mass-murderers in Pakistani history, including Fazl-ur-Rehman Khalili, the head of Harkat-ul-Mujahideen, Saifullah Akhtar, the head of the Harkat-ul-Jihad-ul-Islami, Azam Tariq, the head and founder of the Sipah Sahaba, Masood Azhar, the founder of Jaish Muhammad, and Nizamuddin Shamzi, also a founder of the Jaish Muhammad. According to interrogation transcripts of Masood Azhar Binori Town has been a meeting place for local outfits like the SSP, and the Taliban and Al Qaeda.

Mufti Naeem himself has been caught on social media pronouncing Shia Kafir on the Friday before the Safoora massacre of Ismailis. Now that love has gone sour, Mr Naeem, you dont get to pass all the blame on the state. Perhaps half of it, but you own up to and take responsibility for the part played by madrassahs such as yours, in the death of 75,000 Pakistani’s.

It is vital that we understand that the Taliban do not just exist up in FATA, and therefore the Army operation alone will not cure this menace. Madrassahs like Binori Town in urban centres are the major recruitment and indoctrination center for the Taliban in the south of the country, which the Civilian Government must restrain as its committed role in the National Action Plan, promised to the nation.

It is also vital that we understand that the situation Pakistan is in today is a result of very bad decisions made by the State of Pakistan. It may be comforting to play the victim card and believe that RAW is behind all this, as many hyper nationalized Pakistani youth believe, and as many unscrupulous TV presenters claim; but the fact remains that there is no or scant evidence behind such claims, beyond statements of politicians and generals, whereas there is overwhelming and substantiated evidence of the hand of the State of Pakistan in creating these elements, in its pursuit of a disastrous foreign policy. Many media-age and show business fools in Pakistan believe they are being patriotic by blaming “foreign agencies” for all our terrorism, I say the greatest betrayal to Pakistan at this critical time would be to misdiagnose this predicament. 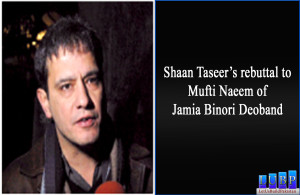 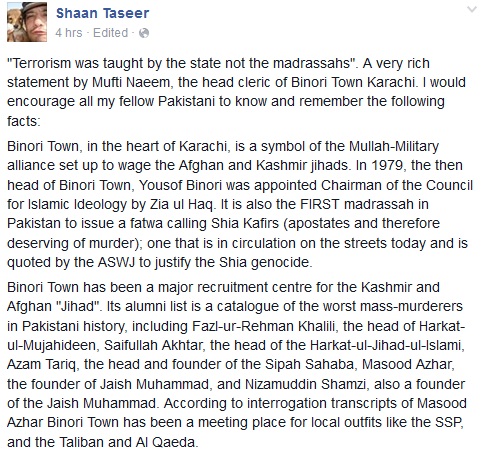 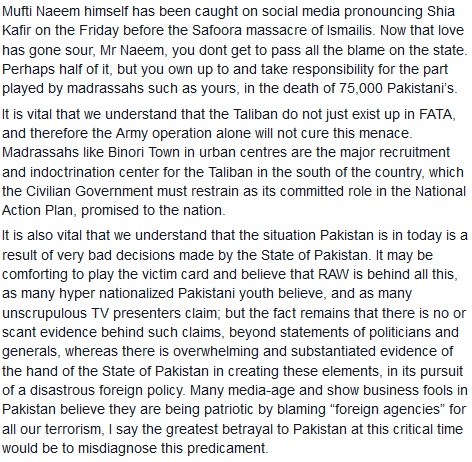