I think your arguments are typically playing on semantics.

You had stated: “Would have been happier if Malik Ishaq had been convicted by a judiciary. For those who follow him the encounter will turn him into a martyr”

both implies very strongly and in some cases is definitive that

1. Malik Ishaq had NOT been convicted. This is actually a false position and being from the legal profession and as an activist, you should know that Malik Ishaq WAS convicted. It was a compromised PCO judiciary that not only stood up to greet him, offer him tea and biscuits but even overturned past convictions. The Supreme Court – especially Justices Khosa, Jawad S Khawaja and PCO Chaudhary Iftikhar have played a very dubious role. The Supreme Court released Malik Ishaq for “lack of evidence” even as he was boasting his 100+ murders publicly, without duress and fully stating intentions to carry out more.

From 2010 to 2015, thousands of Shias have been butchered in Pakistan and as Vice President of ASWJ-LeJ, Malik Ishaq played a central role in this ongoing genocide.

2. “For those who follow him this encounter will turn him into a martyr”
Are we going to now base our perspectives on the standards of martyrdom of ASWJ-LeJ!!!

Also, I agree the use of the word “encounter” is not a definitive implication that Malik Ishaq was killed extra judicially. But it is a strong implication to that effect.

Overall, Mohammad Jibran Nasir’s reaction, while being marginally different in terms of semantics – is part of the same bandwagon that were hollering “extra judicial” for Malik Ishaq.

If anyone is claiming that the judicial process in Pakistan is anything close to functional, they are being deliberately obtuse and dishonest!

What I see is a clear case of double standards. For LUBP, one can abuse them and accuse without providing even a basic reference from their website. Some even have gone to the extant of making poor forgeries to defame LUBP. On the other hand, there are some commercial liberals who have been given a status of Infallibility and no criticism against them is tolerated.

On the issue of LUBP’s criticism of Jibran Nasir’s commentary on Malik Ishaq’s death, I have to agree with LUBP. There is a disturbing pattern. In one instance, Jibran has made the False Moral comparison between Sipah Mohammad and LeJ. Notice, he has left out the ASWJ which shares common members and leaders with LeJ and is essentially the same organisation. In another instance, Jibran removes the common Shia faith identity of Hazaras and like other commercial liberals, has reduced and misrepresented Shia genocide in Balochistan into an ethnic issue. Both instances have been recorded on LUBP – just as support for Jibran when they have appreciated some of his work. That is the way most media functions and why should LUBP be held to a separate standard?

I would like to ask Syed Talib Abbas Raza and Asad Zaidi if they have asked Jibran any of these tough questions.

For instance, how many thousands of Shia deaths were ok before Malik Ishaq would be finally convicted?

Given the pro ASWJ-LeJ stance of current PML N government and the deeply compromised nature of the judiciary and the pathetic state of the media where the Hamid Mir, Ansar Abbasis, Orya Maqbool Jans and Najam Sethis are openly providing ASWJ-LeJ a clear platform,

Isn’t it delusional at best and dishonest at worst to expect a conviction for Malik Ishaq?

Should the reaction of millions of Pakistan’s Sunnis, Sufis, Shias, Christians, Ahmadis and even cricket fans on the death Malik Ishaq – be based on the subsequent acts of ASWJ-LeJ??

This is an absurd and grossly insensitive statement to say the least.

I see that LUBP and few others are under constant threats by Tahir Ashrafi and ASWJ-LeJ chief Ludhyanvi. They are least concerned about Jibran, Beena, Sethi etc. That should tell some of the naive people on this thread something.

For the shameless insensitive blind supporters of this judiciary:
“Thirteen years ago, Fida Hussain Ghalvi and three other
witnesses boldly testified against Lashkar-e-Jhangvi’s top hitman Malik Ishaq for the killing of 12 members of their family. They didn’t know that their search for justice would lead them nowhere, the ordeal had just begun…
LAHORE: The mere thought of the murderer of twelve of his kin being acquitted is enough to send a ripple of fear up his spine. Fida Hussain Ghalvi’s thoughts revert to the time when 13 years ago, he and three other men had boldly testified against Malik Ishaq the formidable founding member of the banned terrorist group, Lashkar-e-Jhangvi.
Malik Ishaq, the man who Ghalvi and other victims of his killing spree believed would never see the light of day, is all set for release from prison. Ishaq was arrested in 1997 for involvement in sectarian murders almost all of his victims were members of the minority Shia community. Police charged Ishaq with murders of 70 people in 44 different cases but he escaped conviction in each case due to “lack of evidence” against him.”

For those who are being coy and engaging in the most insensitive semantics about how they wish Malik Ishaq was convicted by the judiciary – SHAME ON YOU ALL!

“In that context, it is very surprising that one of the Supreme Court judges who released Malik Ishaq on bail last week scolded the prosecution and said the case was weak. The same judge, Justice Asif Saeed Khosa, was part of a Lahore Hight Court bench that had asked the police to close down cases of hate speech and incitement to violence, against Jamaatud Dawa chief Hafiz Saeed. The bench would simply not accept that Jamaatud Dawa was another name for Lashkar-e-Taiba, because the new name was not present on a certain list.

Malik Ishaq praised the Supreme Court after his release and said justice had been done. And that is ironic. Why do these people refer to the modern secular notions of law and justice when they do not believe in them”

Mohammad Jibran Nasir Perhaps you should also learn some googling techniques from 1st Graders or you would not have missed out on this basic fact:

“Anti-Terrorism Court judge Bashir Ahmed Bhatti convicted Ishaq but the Supreme Court overturned the conviction in 2006 because of “lack of evidence”.

Syed Talib Abbas Raza will you now tag Jibran and treat him with the same standards as you have with LUBP? Can we expect some “principles” from you or is this just one way bashing. 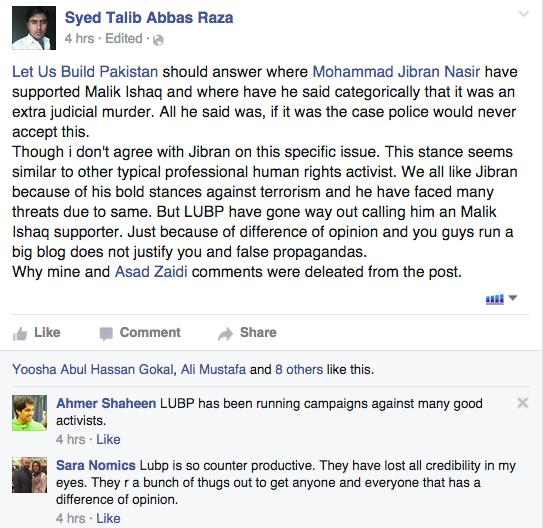 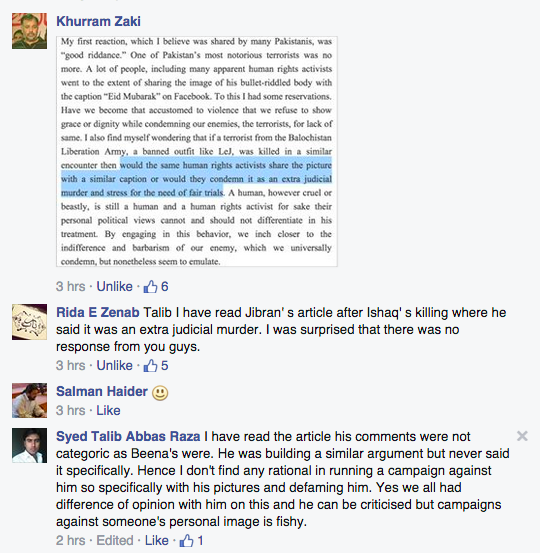 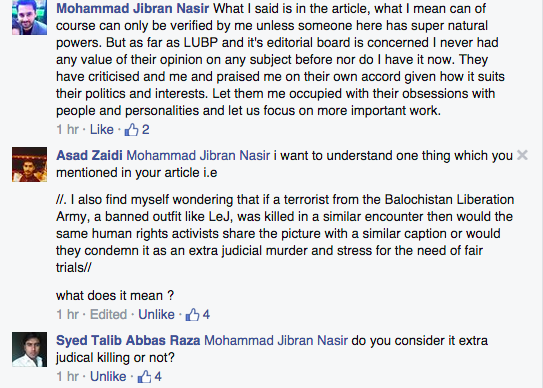 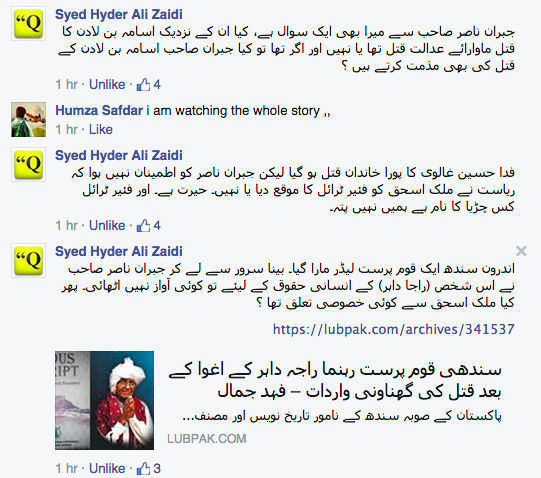 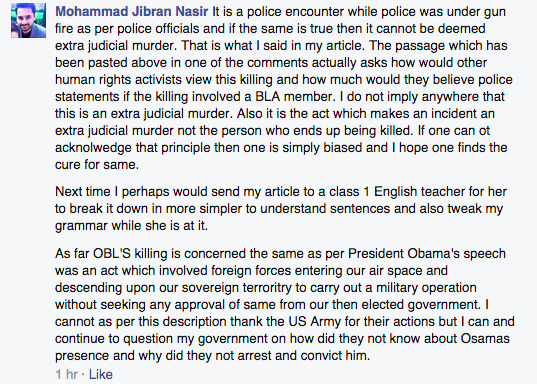 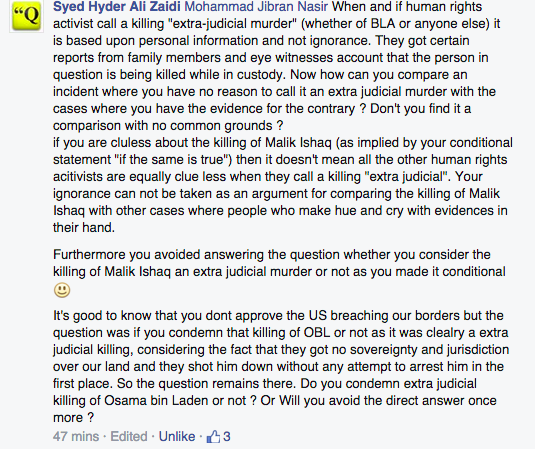 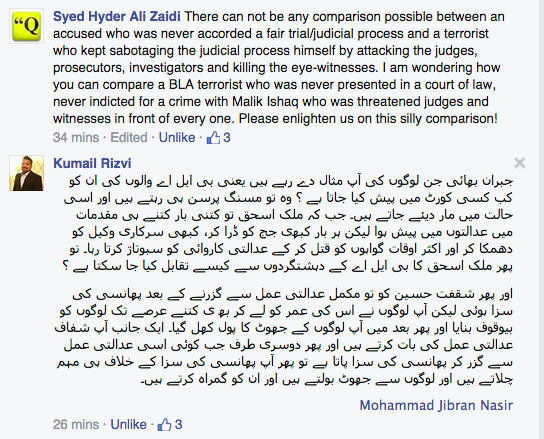