Home  »  Original Articles   »   Who will Pakistani Ashrafi liberals blame for the massacre in Shia mosque in Qatif, Saudi Arabia – by Riaz Al-Malik Hajjaji 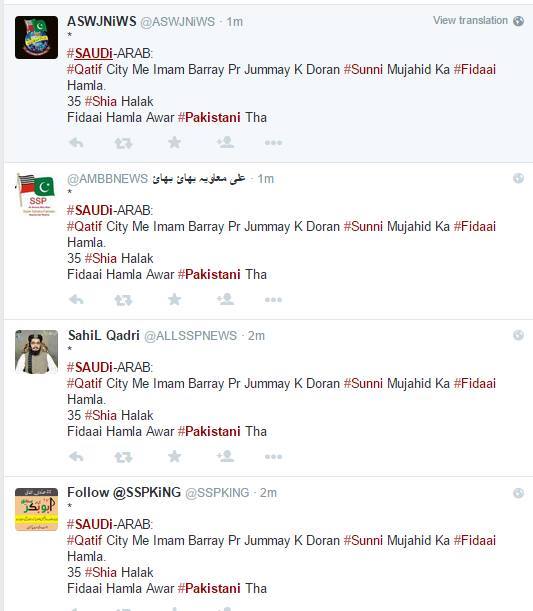 For years, every time there is a massacre of Shias, your lot peddles out the patently dishonest “Iran vs Saudi” binary. As per this obfuscation, you dishonestly portray ‪#‎ShiaGenocide‬ as an “Iran vs Saudi proxy war” – even though the victims are Sunnis, Shias, Christains, Ahmadis who are ALL being killed by Saudi-Qatari funded and at times, NATO backed Salafi-Deobandi terrorist groups like Daesh (ISIS), Al Qaeda (FSA), ASWJ-LeJ/Jundullah/Jamaat ul Ahraar/Taliban, Al Shabaab and Boko Haraam.

As per this obfuscation, your lot mildly condemns this attack, then quickly starts blaming Iran and then the victims. You often use vague and sweeping terminologies like “Islamist” while staying clear and silent about explicitly mentioning the Takfir (Othering) justifications used by the specific Deobandi and Salafi doing the killings.

After the recent massacre of Shia Ismailis in Pakistan, you started blaming private universities and still stayed silent and typically obfuscatory on the common underlying Takfiri Deobandi identity of the terrorists. You were finding it hard to blame the Ismaili Shias for their own massacre as you normally do with the Twelver (Isnashari) Shias. You routinely blame the Twelver Shias for their own massacres by viciously painting them as Iranian fifth columnists – like you routinely did in Bahrain and Iraq.

The Question is how does the recent massacre of Shias in Saudi Arabia fit into your “Iran vs Saudi” proxy war obfuscation?