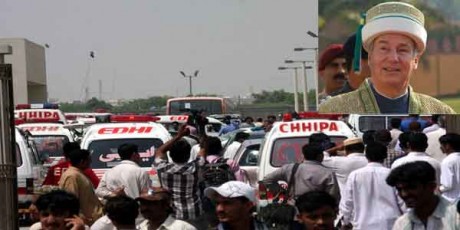 While we migrated from Karachi to Tanzania in 1978, I could never forget the city. The bustle of Karachi’s Bohri Bazaar and Empress Market are a sharp contrast to Darajani Market. Pemba Island while beautiful just does not possess the same energy as Keamari. The Safoora Chowk massacre (13 May 2015) in Karachi is a fracture of my consciousness from which I will never recover. Ismaili Shias are an intrinsic part of Sindh, Gilgit and Hunza. The community has built scores of schools, colleges, universities and hospitals. While Khyber Pakhtunkhwar and FATA have been ravaged by Deobandi Jihadists of the Taliban, the Ismaili Shia areas of Hunza and Gilgit have been an oasis of peace – aside from the one massacre of Ismaili and Isna Ashari Shias in Gilgit by Deobandi terrorists in the 1980s. In Karachi, the best hospital and medical college, the Aga Khan University is a testament to the contributions of our community. The Aga Khan Development Network (AKDN) has contributed a lot to Pakistan’s development and national economy.However, the time has come to stop wallowing in the past and developing an Action Plan to survive in the near future. The Safoora Chowk massacre of Ismaili Shia Muslims should serve as a wake up call to my community that the same Deobandis who have committed several massacres of Sunnis,  Sufis, Isna Ashari or Twlever Shias and Christians will not spare us either. His Highness has stated: “This attack represents a senseless act of violence against a peaceful community. My thoughts and prayers are with the victims and the families of those killed and wounded in the attack,” the Aga Khan said. The Aga Khan noted that the Ismailis are a peaceful global community living in harmony with other religious and ethnic groups in many countries across the world, including in the Muslim world.”

http://www.akdn.org/Content/1333The world should know that Ismailis are truly those who live in harmony. However, despite our harmonious and peaceful character, in the last few years, our professionals, community leaders and ordinary citizens in Karachi and other parts of Pakistan have been systematically target killed by the widely known Takfiri outfits.It is NOT our fault that the Deobandi terrorists of ASWJ (Sipah–e-Sahaba) and their supporters like the controversial Deobandi cleric Mufti Naeem, Mufti Taqi Usmani and others pass hate fatwas against us. It is NOT our fault when the UK-based Deobandi Wahabi hatemongers like Anjem Choudary justify our massacres with such expressions of hatred. 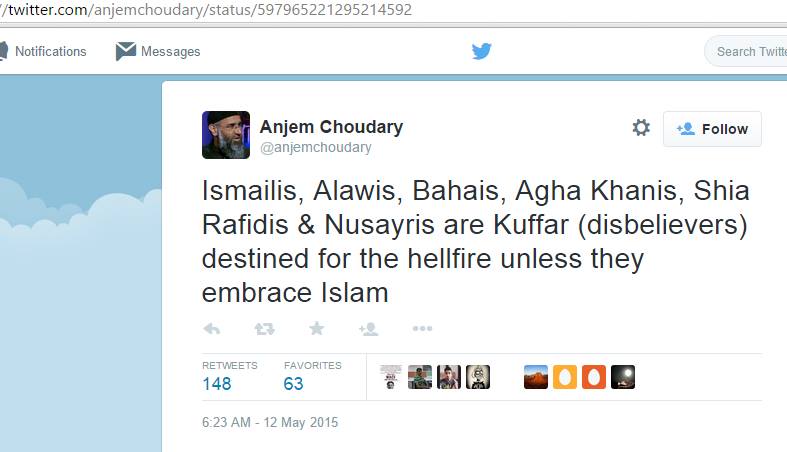 1. We need to IMMEDIATELY make a list and identify the Deobandi hate madrassas, mosques and clerics, such as the Binoria Madrassa led by Mufti Naeem, Jamia Haqqani led by Sami-ul-Haq, Masjid Siddiq Akbar led by Aurangzeb Farooqi, Khair ul Madaris led by Hanif Jalandhri, whose institutions past hate fatwas against us. 2. We also have to exert global pressure on the United Nations, European Union and the United States Department of State to ban and monitor the activities of Deobandi terrorist groups like ASWJ (formerly known as Sipah-e-Sahaba) and its various different avatars and aliases, such as Jundallah, Lashkar-e-Jhangvi, Jamaat-ul-Ahrar and the Taliban. 3. We must engage with articulate and outspoken activists and policy makers such as Senator Ed Royce and Professor Christine Fair to exert full pressure on the United States to censure all those in Pakistan who are supporting these groups including rogue sections within the government and the security establishment who continue to appease or protect Deobandi Jihadist outfits. 4. We must also engage with political leaders and activists to lobby the US government to apply pressure on those sections of the Pakistani establishment and the Saudi government who still sponsor and support Deobandi terror groups. These are the same Deobandi groups whose supporters like Mufti Naeem have issued hate literature and fatwas against our community. 5. We must fund academic and policy research projects to document and archive the systematic target killings of not only Ismaili Shias but also Bohri Shias, Isna Ashari Shias and other communities in Pakistan at the hands of the Deobandi ASWJ terrorists.6. We must engage with human rights groups such as HRCP, HRW and Amnesty asking them to document and issue detailed reports on the state of Shia genocide and Sunni Sufi genocide in Pakistan.7. We must direct at least one-fifth of our income to (a) provide support and relief to the victims of Deobandi violence in terms of medical cover, employment, education and other economic and immigration assistance, (b) provide latest anti-terror technology (eg scanners, bomb detectors, jammers, X-ray scanners etc) to safeguard our Jamaat Khanas and community centres, (c) provide legal arms and civil defence training to all members of the community, and (d) hire sufficient number of well-armed and well-trained security guards for our offices, schools, buses and community centres.The above points are important to save not only Ismailis but entire humanity from Deobandi terrorism.If we don’t stop them in Pakistan, their tentacles like Anjem Choudary and other members of the Deobandi and Salafi Wahabi extremist diaspora will start targeting us and other innocent people in Europe, Australia, United States and other parts of the world.For too long, Ismaili Shias and Bohra Shias were under the impression that the Deobandi militants will not target us as they have targeted Sunni Sufis, Christians and Isna Ashari (Twelver) Shias. The Safoora Chowk massacre has been our 9/11. Here is my call for action to all Ismaili Shia Muslims, women, men and children worldwide and their sympathizers and supporters.