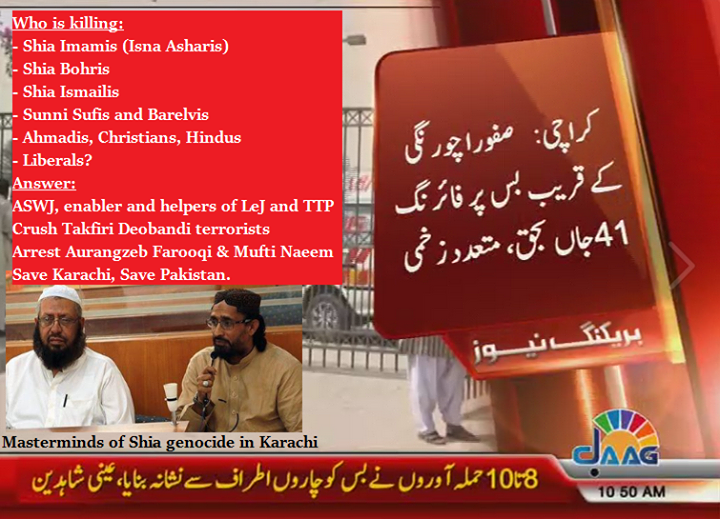 Karachi -13 May 2015. At least 47 Shia Ismaili Muslims were killed and 13 others wounded on Wednesday when ISIS-affiliated Deobandi militants of ASWJ (Sipah-e-Sahaba) opened fire inside a bus carrying members of the Ismaili community near Safoora Chowk in Karachi.

Sindh Police Inspector General Ghulam Haider Jamali said that 60 people were on board the bus when six gunmen entered and executed 47 passengers. He added that the armed men used 9mm pistols in the massacre. The attackers managed to successfully flee after the attack. Hospital sources have so far confirmed that the dead include 25 men and 16 women. Police officials said that there were no children among the casualties.

Rana M Razzaq, a security coordinator at the Memon Medical Center, told Dawn that, “One young girl hid and survived. Three or four others who were brought to the hospital have survived…the rest are all dead.”

A senior police official, requesting anonymity as he was not authorised to talk to the media, told Dawn that the attackers entered the bus and shot the passengers in the head.

“The gunmen stopped the bus and first fired at it from outside,” a policeman told AFP. “Then they entered inside the bus and open fire indiscriminately. After that they checked to see if anyone was left uninjured.”

Today’s massacre was the worst anti-Shia attack this year since January 30, when a suicide bomber blew himself up in a mosque in the southern Shikarpur district, killing 61. Anti-Shia attacks have been increasing in recent years in Karachi and also in Quetta, the northwestern area of Peshawar and Parachinar and the far northeastern town of Gilgit.

Around 1,000 Shias have been killed in the past two years in Pakistan, with many of the attacks attributed to the hardline Deobandi group Lashkar-e-Jhangvi (LeJ) aka ASWJ (Sipah-e-Sahaba or Ahle Sunnat Wal Jamaat) who view them as heretics.

Now we wait for Pakistan’s elitist or Sufyani “liberal” intelligentsia to obfuscate this massacre of Shia Ismailis. Possible obfuscations may include the one or more of the following: possibly even a combination. DAWN already started the cover up by excluding the Deobandi cult identity of the Taliban and other Deobandi terrorist groups like ASWJ (LeJ/Jundullah), led by Aurangzeb Farooqi, Ludhyanvi and Ramzan Mengal, who take pride in such acts

1. The Ismaili Shias were Baloch supporters and members of NSF.

2. The Ismaili Shias were Yemeni proxies

4. Time to dig up the exceptional cases of violence by Shias and Sunni Sufis against Deobbandi LeJ-TTP-ASWJ terrorists (nearly all acts of discriminate retaliation) to fudge the line between the victims (all communities of Pakistan) vs the perps (nearly always Takfiri Deobandis)

5. Equate this massacre as a collective punishment because of some mythical Ismaili Shia landlord in Jhang or an Ismaili Shia being critical of a worshipped Sahaba like Caliph Yazid and Caliph Muawiya. Given that there are no Ismaili Shia public commemorations on Ashura, the last must be hard to justify.

5. That the attack was carried out, not by Sipah-e-Sahaba (ASWJ) and affiliated Deobandi terrorist outfits and hate clerics, but by RAW, CIA, Mossad etc.

But never doubt the capacity for intellectual dishonesty amongst Pakistan’s Sufyani liberals and Muawiya Marxists based on their track record of shielding Deobandi terrorists from valid criticism. Trust them to use opaque and vague and misleading terminologies like “Islamists” etc and somehow drag Iran into this as part of their outdated and dishonest “Saudi vs Iran” or “Sunni vs Shia” false binaries.