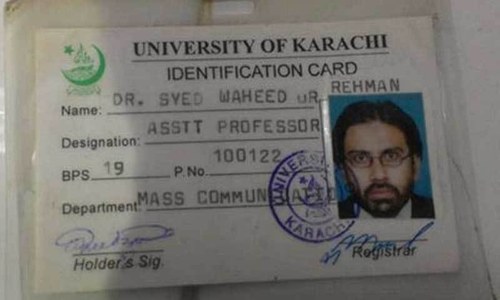 ISIS-affiliated Deobandi groups like ASWJ-LeJ have a record for even celebrating these murders like they did when their cowardly cohorts murdered Prof. Sibte Jaffer.

The vice principal of Jinnah Medical and Dental College, Debra Lobo was targeted just too weeks ago but was fortunate enough to survive after receiving serious injury.

With the exception of Sabeen Mahmud, none of these professors and progressives, were linked to the Baloch nationalist cause. It will be unfair to limit Sabeen to the Baloch cause only as she was equally vocal and active against Deobandi Takfiri terrorism by the ASWJ and its various aliases LeJ, TTP etc. In fact, she had received threats from the Deobandi terrorist lobby loyal to hate clerics Abdul Aziz and Aurangzeb Farooqi.

This latest killing, of Professor Yasir Rizvi, also highlights the indecent haste and selective moral outrage of Pakistan’s elitist liberal classes in their manipulation of Sabeen’s tragic murder. Based on circumstantial evidence, many prominent civil society activists and liberals, along with the typical NGO opportunist types used Sabeen’s murder to selectively further their activist credentials for the Baloch cause and also to appease their foreign donors. They are also insulting Sabeen’s injured mother who categorically said that in addition to agencies, Sabeen was being persistently threatened by Deobandi terrorist outfits.

While one must hold the State and ISI responsible for their links with ASWJ’s Ramzan Mengal, Ludhyanvi etc, one must also recognise that General Raheel Sharif’s tough stance against the Taliban and their urban presence is a clear departure from that of Generals Kayani, Aslam Beg and Zia. It is blatant intellectual dishonesty to complete exclude any mention of the Saudi-funded Deobandi terrorist group like ASWJ that still enjoy the backing of not just the State but the elected PML-N government led by PM Nawaz Sharif. In fact many fake champions of the Baloch cause including Hamid Mir and Najam Sethi regularly promote and humanize Ahmed Ludhyanvi, Tahir Ashrafi and other pro-Taliban Deobandi hate clerics through various media platforms eg Geo TV, The Friday Times etc.

Recent media and intelligence reports have revealed that Al-Qaeda and ISIS elements in Karachi have developed links with Deobandi extremist outfits and madrassas including Binori madrassa. Deobandi recruits are being used to target kill not only security personnel but also liberals, Sunni Sufis and Shia Muslims.

The military establishment must not hesitate from tough action against Deobandi terror groups who feel the targeting of Sunni Sufi/barelvi, Shia, Christian and Ahmadis is their divine mission. However, rogue elements in the establishment are not the only ones that patronize and support these groups. Ruling PMLN party is known for its support to ASWJ terrorists and leaders.
These ISIS-affiliated Deobandi terror groups have publically come out as Saudi proxies in Pakistan and have often aligned themselves politically with the PML N federal and provincial governments. While sparing the PML N and to some extant PTI, the same groups have also regularly targeted the army. However, Pakistani liberals and civil society – barring exceptions – have rarely held these groups responsible. On the contrary, some sections of liberals have even promoted ASWJ-LeJ clerics like Ludhyanvi and Tahir Ashrafi.

The Baloch cause is just one of the causes that the late Sabeen Mahmud had highlighted. She had also highlighted other controversial causes such as the growing protests against Lal Masjid and had even lent solidarity to the peaceful protest rallies against Shia Genocide at Numaish, Karachi 2013. Sabeen was also a tireless crusader for creating scientific space, for combatting misogyny and for taking on malpractices of powerful corporate and political entities.
Her murder falls in a pattern of the target killings of other high-profile intellectuals, academics and activists like Dr. Shakeel Auj, Professor Sibte Jaffar and Professor Wahidur Rahman today – all of whom have no links with the Baloch cause.

As for the Baloch nationalist cause, the “liberal” Pakistani view for this cause is becoming increasingly problematic for its omissions and selective morality. There is no outrage when BLA takes credit for the routine massacres of Seriaki, Pashtun, Punjabi and Urdu speaking labourers and professionals. The Mama Qadeers are evasive on the gradual hijacking of their cause by, ironically, the State-backed ASWJ-LeJ. After all, it was ASWJ chief, Ramzan Mengal, who lead the funeral prayers of Baloch nationalist icon, Nawab Khair Baksh Marri.

While selectively championing for a Baloch nationalist cause with a narrative stuck in the 1960’s and 1970’s, some of Pakistan’s liberals and their expat cheerleaders often obfuscate on the growing nexus between BLA and ASWJ-LeJ. The same lobby obfuscates Shia genocide in ethnic terms. The massacres and marginalization of Shias in Balochistan in all likelihood already exceeds the casualties suffered by Baloch nationalists since 1948.

Selective moral outrage where dissenting voices are shouted down is the greatest disservice that can be done to the combined legacies of those who strived for expanding the intellectual and progressive space in Pakistan. The selective condemnation of the military establishment (which they deserve) while being mum on Saudi Arabia, PML N, ASWJ-LeJ and the intelligentsia that backs them is also a disservice.