Pakistan is all too familiar with the crimes against humanity by religious extremists. Close to 70,000 Pakistanis have been killed by ISIS-affiliated and inter-connected  Takfiri Deobandi groups like ASWJ-LeJ, Taliban, Jundullah and Jamaat ul Ahrar.

Aside from a section of compromised “liberals”, there has not been much protest to stop the recent hangings of convicted terrorists from the extremist groups mentioned above.

The religious extremists who have brought death and destruction to Pakistan do not believe in the Geneva convention or the United Nations Declaration of Human Rights.  They need to be dealt with in accordance of these ground realities.

Similarly, the Jamaat-e-Islami collaborators of the Al-Shams and Al-Badr brigades undertook some horrific crimes against humanity during the 1971 army action against the then East Pakistan. This is a dark chapter in Pakistan’s history which was the outcome of 24 years of discrimination against our former countrymen in the former East Pakistan. 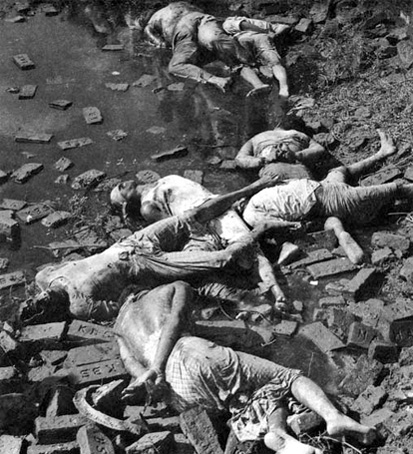 Executed intellectuals in the Dhaka Rayerbazar, 1971

Pakistan must confront this history and support Bangladesh in its efforts to punish those who inflicted such brutality against them in 1971.  Here is a list of relevant articles published by LUBP on this dark chapter in our history:

“Prosecutors said that Qamaruzzaman, an assistant secretary general of the Jamaat-e-Islami party, headed a militia group that collaborated with the Pakistani army in central Bangladesh in 1971 and was behind the killings of at least 120 unarmed farmers.

Bangladesh blames Pakistani soldiers and local collaborators for the deaths of 3 million people during the nine-month war of independence from Pakistan. An estimated 200,000 women were raped and about 10 million people fled to refugee camps in neighboring India.

Jamaat-e-Islami denounced the execution and called for a nationwide general strike Monday. At the same time, hundreds of people who supported the trial and execution rallied in Dhaka. Similar demonstrations were held in other cities and towns.” Source