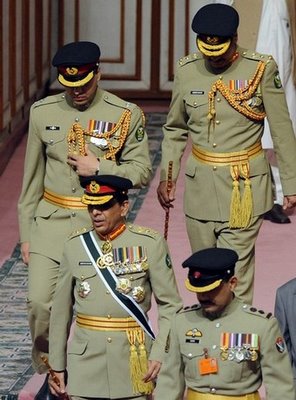 I don’t understand what is all the fuss about the Pakistan Army going to Yemen. There is nothing new here, it’s just that the world is becoming painfully see-through. I do not see any means of getting along without money. You have to look at the commercial value of things. Being the proud pragmatist institution it is, Pak Army attributes money the sort of royalty that begets loyalty. In a nation where everyone sells that which does not belong to them, and their dupes pay their illusory values in genuine coin, there abound merchants of heaven, merchants of religion, merchants of miracles, merchants of patriotism; what is wrong if our Army gravitates towards the one who garnishes its purse the best? Who can bid higher than the KSA and the USA (the two brothers) combined? We must learn to bow before the economic facts.

I actually feel deeply sorry that the PM Nawaz Sharif has to backtrack on his intent in the face of unexpectedly widespread opposition from within the country. What a loss of an opportunity to garner hard currency for the deepest of pockets in the Republic. It is amazing how many noble conceptions are stillborn in the heat of an increasingly transparent world. I am dismayed to see how all other political parties and the likes of Sunni Tehreek are blind to the forces of supply and demand in the mercenary market as well as the sensitivities of our nation’s foremost principal-agent relationship. Hence, my ruing the opportunity that seems to be slipping away despite the PM’s clean instinct to profit from it. I am sure that with Kiyani around, the PM may have been in a better position to contrive a solution in the interest of the pockets all round.

These guys need to be pragmatic. After all, mercenaries have been a fixture in organized warfare since ancient times. They served Israel under both David and Solomon. Greek mercenaries served in Egypt prior to 500 BC. The tradition has never ebbed away and is very much alive and thriving. If 1970 Jordan was right, if Pakistan Army’s long presence in Saudi Arabia is right, if counseling Bahrain’s royals is right then what is wrong with making some more money by butchering a few thousand Houthis? Why let the Egyptians run away with the prize money? Long live the mercenary spirit.

We have to look at Pakistan’s commitments in the Middle East with an open mind. A few things worth noting are:
– Pakistan was made for and in the name of Islam and overtly claims itself to be bastion of Islam. Therefore, it cannot remain aloof from the problems of the Ummah and what is happening in the Muslim world.
– We may be surprised by some of the developments in the Middle East but we still have to approach them strategically.
– Any effort to seek balance should not come at the expense of Pax-Saudi system –the imperial project in which the KSA enjoys the dominant position within a network of Muslim countries- of which we have been a part for a long while. Muslim countries that are outside this network are considered rogue and must be restrained, diplomatically or with force.
– Pakistan was always supposed to provide military canopy to this network and to extend a nuclear umbrella over the KSA, especially when the balance of power is upset against the KSA.
– Hence, now that the KSA is at war it is not possible for Pakistan to simply slither offstage, discarding expectations and leaving the KSA up the creek in a desert.