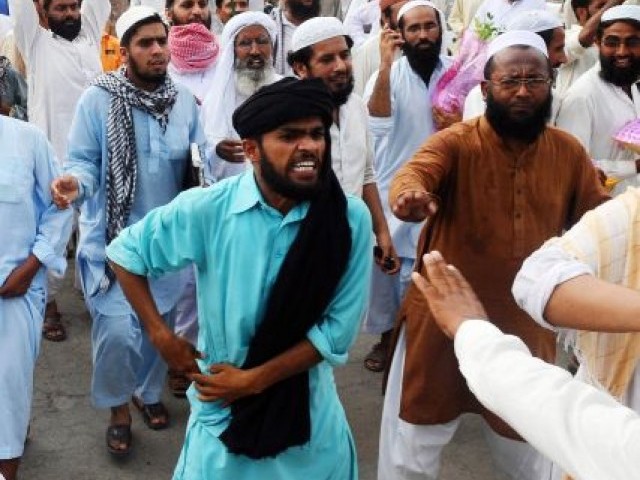 In an earlier statement, the Taliban-apologist and Pro-Al Qaeda PML N government sounded more like an advocate for ISIS-affiliated Deobandi terrorist groups like ASWJ-LeJ when it stated

“The government on Wednesday said the banned Lashkar-e-Jhangvi is involved in the latest wave of sectarian attacks in the country in a bid to pressurise the government to halt executions of their members, BBC Urdu reported on Wednesday.

In a letter addressed to provincial authorities, the interior ministry has said that the LeJ had sought support from al Qaeda in executing reprisal attacks over the execution of its members and crackdown by security forces, but the militant group refused. That prompted the LeJ to turn to Taliban chief Mullah Fazlullah who provided financial support with the promise of further assistance.” Source

The massacres of Sunnis, Shias and Christians by ISIS-affiliated and interconnected Deobandi terrorist groups like ASWJ-LeJ/Taliban/Jundullah/Jamaat ul Ahrar have only intensified since 2015. The clear and stated goals of these massacres is to stop the Army action against the Taliban and other Deobandi terror organisations. The stated goal is also to stop convicted and boastful terrorists from getting punished for their crimes. Unfortunately, a powerful and influential section of Pakistan’s hypocritical “liberal” elites is also echoing the sentiments of these Deobandi terrorist groups. There have been four attacks on Shia mosques, two on Christian churches and a prominent anti-Taliban Sunni leader, Mahmood Shah was murdered in Mansehra last month. Hundreds of Sunnis, Shias and Christians have perished in these attacks in 2015 alone.  These attacks have closely followed the massacre of nearly 150 children by the same ISIS-affiilated and interconnected Deobandi terrorist groups on December 16th, 2014. The Deobandi madrassa network as well as the Deobandi evangelist groups under Mufti Naeem, Mufti Taqi Usmani, Maulana Tariq Jameel (TJ) Maulana Fazal-ur-Rehman (JUI) , Siraj ul Haq (JI) Qari Hanif Jalandhari (WuM), Tahir Ashrafi (PuC) have all thrown their weight behind ISIS-affiliated Deobandi terrorist groups. Pakistan and the world community will never solve this problem until it clearly identifies the specific Deobandi and Salafi ideology that inspires violence and genocide by ISIS/Daesh, ASWJ/LeJ, Taliban, Boko Haram and Al Qaeda.Specifically, those who are using vague and generic terminology like “Islamist” to obfuscate the specific Deobandi and Salafi roots of transnational terrorism are culpable in obscuring the identity of terrorists.

One major anti-Shia “progressive” muslim obscurantist who deliberately and consistently obfuscates the specific Deobandi and Salafi identity of ASWJ-LeJ/Taliban was part of JUI when they and Jamaat Islami acted in unison with the military dictator General Zia ul Haq in the PNA movement.