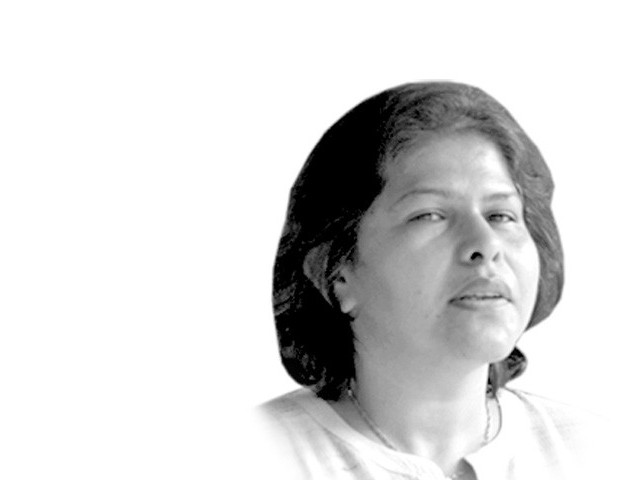 The other day as I criticized the authorities stopping Mama Qadeer and Farzana Majeed Balouch from leaving the country on social media, a retired army officer was quick to snap back that the state had only stopped a traitor who took money from the usual suspects – India. As I engaged him in a conversation to explain what evidence did he have, all I got was a cold response that there was sufficient proof. This is a story spread about people to discredit them since no one can pressure the state from providing visual evidence. We are told that this is to keep sources of intelligence intact. Interestingly, we are later informed that this evidence is shared with American Secretary of State. Makes you wonder why the sources don’t get compromised in telling the American but it does in taking your own people into confidence.

The real question, however, is that what makes Mama Qadeer and Farzana Balouch traitors? Very simply it is their act of criticizing Pakistani nationalism and wanting to separate out of frustration due to the attitude of the state. From a nationalist-patriotic definition this is sinful. You cannot encourage the idea of separating one particular territory. But I wonder if the act of the above-mentioned Balouch is qualitatively different from the Punjab Chief Minister Shahbaz Sharif separating his province from the rest of Pakistan and negotiating with Al-Qaeeda for Punjab’s security only? It is almost like the largest province saying that I do not want to take the burden of other territories or secure these because they are too messy and peripheral. The information that has come out from the documents found in Osama bin Laden’s compound in Abbotabad reveal the communication of 2010 between the Punjab government and Al-Qaeeda through the Taliban. Apparently, Fazlur Rehman Khalil of Harkat-ul-Mujahideen (HuM), which is a good jihadi group, played the interlocutor. Khalil’s involvement is credible due to his long lasting contacts with Al-Qaeeda (currently the head of Al-Qaeeda in the Indian Subcontinent has trained with and was a member of Khalil’s HuM until 2006).

Further information indicates that the former ISI chief was also in the know of such dialogue. This seems credible considering that the intelligence chief knew about bin Laden’s whereabouts. This is at least the message given to the outside world through interviews especially arranged in international media for another former ISI chief. This particular general almost confessed to his organization knowing about OBL. Of course, the beauty of such interviews is plausible deniability. You can always say that this was personal recklessness of an individual.

But the attitude from the establishment is a reminder of an old mindset which tends to differentiate between critical and peripheral territories. If we have not forgotten the 1960s, a myth was built regarding ‘the defense of the eastern wing lies in the western wing’. The idea was that since the then East Pakistan could not be defended militarily, the military would launch an offensive from the western wing to deter India. A strong military presence in East Pakistan was not built because the territory was considered peripheral. Ultimately, when the 1971 war started nothing was done to prove the above theory right. The take away from the above example is that while the establishment allows itself the privilege to condemn a territory as peripheral, those objecting to the attitude will get duly punished.

From the state’s perspective mama Qadeer’s sins outweigh the adventurism of engaging in a dialogue with a terrorist organization that was later responsible for killing many of your own citizens. A typical response from an intelligence outfit is that, like any other organization, it has to maintain contact even with the miscreants. But this was more than an innocent ‘keeping the channels of communication open’ tactic. In the words of the retired general speaking in England, violence is part of collateral damage. It is a burden militaries have to bear to fulfill strategic objectives. This also means that citizens cannot condemn the behavior of endangering lives of citizens as treasonous. Surely, no one will be put on the exit control list for the collateral damage of the 140 dead children or many others who die in the tribal agencies, Baluchistan and rest of the country.

Moreover, such admissions and revelations expose the nature of the Pakistani state – it is in fact a very strong state versus a weak society. Although many of the theoreticians of politics believe that any state that cannot maintain its monopoly over violence, I would argue that delegating power of conducting violence to non-state actors has emerged as a norm rather than an exception. Many states from the US and Israel to India and Pakistan do this. I realize that many of us would be tempted to remind ourselves of the great speeches made by certain generals in the past 3-4 years announcing that the real threat to Pakistan was internal rather than external meaning that they did not willingly partake of their power to do violence. The information leaks, however, indicate otherwise.

Such sharing of power is done at the state’s own risk. The threat to public life in general is tolerated or even ignored as necessary evil. The formula of course is that the delegated power will be withdrawn or adjusted when the need arises. This, in fact, is the argument of some elements in the civil society who believe that the military is the only organization that can pull the plug on Taliban and jihadis. What we don’t know however is if a drastic shift in mindset has occurred. The political and civil society has weakened considerably due to a compromised Parliament, media and other institutions. It definitely does not have the power to ask tough questions. It does not even seem to have the intent to challenge a skewed distribution of power formula. So, it is impossible that the civil society or political class will challenge the state’s treasonous behavior before it condemns citizens.