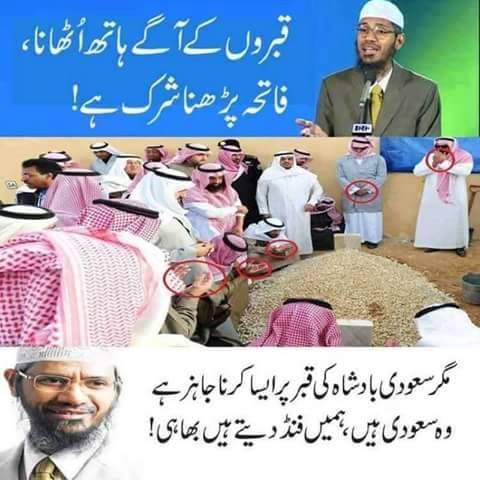 According to Salafi and Yazeed Fan boy, Zakir Naik, praying Quranic verses for one’s departed near and dear ones is Shirk. Shirk means making partners with God and as per the warped logic of Salafis and Deobandis, any act of love, remembrance, culture and harmony is Shirk! The irony of themselves adopting the role of God in both misrepresenting and judging acts that undermines their stark and literalist traditions is clearly lost on both Salafis and their ideological siblings, the Deobandis.

Unless of course it is kissing and hugged the feet of current Deobandi Prophet Tariq Jameel Deobandi.

Or for Salafi Saudi “princes” praying for the last senile Saudi king to hit the bucket captured in the image below.

Or for Salafis and Deobandis slobbering uncontrollably with grief over the pictures of dead terrorists like Osama Bin Laden.

As per someone else’s Facebook status which Hajjaji is shameless copying,

“Example of an urban burger Deo-Nazi:

‘You know, all these Shia and Sunni Barelvi practices are inspired by Hindus. They have corrupted Islam. For God’s sake, what does going to Shrines, and all this nazar-niyaz (free meals distributed mainly amongst the poor to remember the hunger and thirst of the Prophet’s family who were starved to death and massacred by Ummyad Caliph Yazeed Bin Muawiya) have to do with Islam. It has all come from Hinduism.’

But at the same time, yoga is fine, because it is cool! And we have learnt it from Hazrat Swamivivekanand (ra).”

Tahir Ashrafi is infamous for his negotiations with former COAS General Kiyani to secure the release of his friend, Malik Ishaq as well as for his hate remarks against Ahmadis and Shias. Javed Ghamdi has been a consistent vilifier of Sunni Barelvi and Shia beliefs and practices. Both Sunni and Shias have been consistently targeted by Takfiri Deobandi terror groups like ASWJ, TTP, Jundullah- just as their beliefs are consistently targeted by urban burger Deo-Nazis posing as liberals. The same Sufyani liberals are also famous for consistently creating False moral equivalencies between ISIS-affiliated Deobandi terror groups like ASWJ and their Sunni, Shia, Ahmadi and Christian victims.