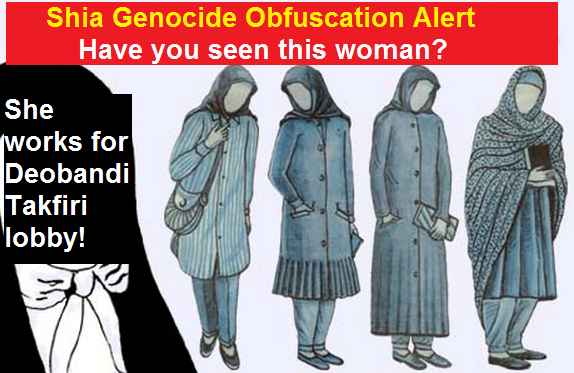 It has been brought to our attention by indigenous Shia and Sunni Sufi activists working in Pakistan that a British Shia female posing herself as a champion of Shia and human rights is working on the following agenda:

1. Hiding, denying or removing the common Deobandi identity of ASWJ, LeJ, SSP, Ahrar, Jundallah and TTP terrorists who have killed more than 22,000 Shias, 45,000 Sunni Sufis/Barelvis and hundreds of Ahmadis, Christians and Hindus in Pakistan.

2. Using generic and obfuscating terms such as Takfiri, terrorist, Islamist, extremist, radical etc to obfuscate or deny Deobandi terrorism and its roots in Takfiri fatwas of Deobandi madrassas.

3. Treating ASWJ as a different entity from LeJ thus following the Deobandi agenda of good Sipah-e-Sahaba and bad Lashkar-e-Jhangvi.

4. Malicious propaganda against Pakitan’s indigenous Sunni Sufi and Shia activists who are sacrificing their lives to highlight and resist Shia and Sunni Sufi genocide at the hands of Deobandi takfiri terrorists.

5. Receiving funding from Western agencies as well naive Shia and Sunni Sufis and then spending that money on further obfuscation of Deobandi terrorism against Shia and Sunni.

This woman is an opportunist and populist of a tall order. She and other members of her family have close links with Deobandi clerics and pro-Deobandi political parties. She is also a supporter of certain dubious elitist liberals who promote Deobandi hate clerics such as Tahir Ashrafi and Ahmed Ludhyanvi as prophets of peace while try to justify and rationalize the genocide of Shias and Sunni Sufis at the hands of Takfiri Deobandis as a Sunni-Shia or Iran-Saudi violence issue. She is also a personal friend of Aman Ki Asha’s Beena Sarwar, whose assistant Ilmana Fasih Deobandi abused Hazrat Ali (a.s.) and Beena tried to defend such an insidious attack on a figure revered by a genocide facing community in the name of freedom of speech.

If you come across such seller of Shia and Sunni Sufi blood, challenge and demand her to:

1. Clearly name and acknowledge the common Deobandi identity of ASWJ, SSP, LeJ, Ahrar, Jundallah and TTP terrorists who continue to change their names in order to escape the Deobandi label.

3. Refrain from malicious propaganda against Pakistan’s indigenous Sunni Sufi and Shia activists who are sacrificing their lives in highlighting and resisting Deobandi terrorism.

4. Refrain from collecting money in the name of Shia, Sunni Sufi and human rights. 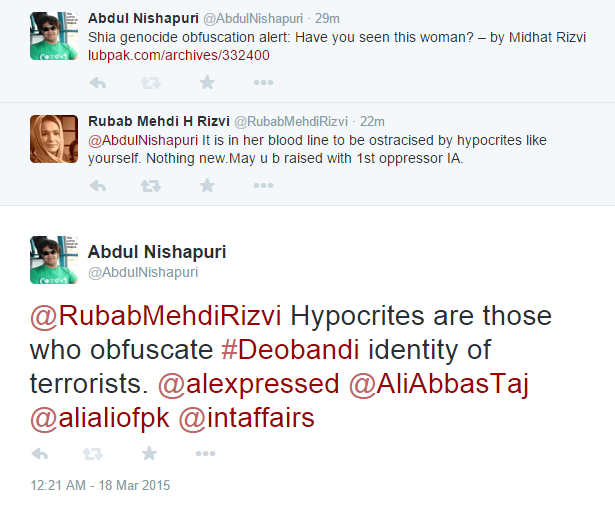