The continuing massacres of Shias all over Pakistan by Deobandi terrorist group and ISIS affiliate, ASWJ-LeJ highlights the complicity of Pakistan’s pro Taliban judiciary as well as those activists who continue to support this deeply compromised institution. The ongoing tragedy targeting Shia Muslims who were offering Friday prayers at a Shikarpur mosque is an example of how ASWJ-LeJ terrorists who are routinely freed by Pakistan’s judiciary are allowed to operate with impunity. 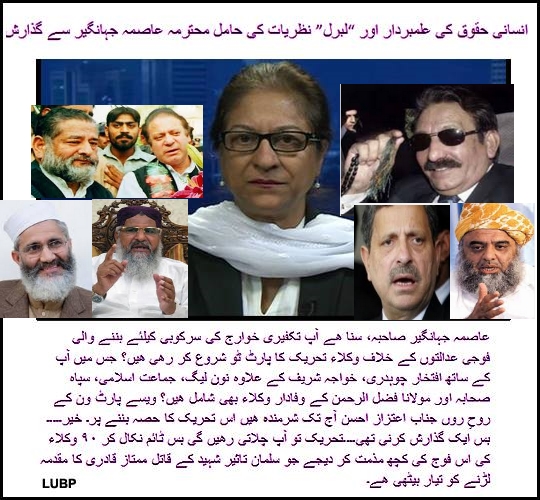 This pathetic excuse of a judiciary continues to have apologists like Asma Jahangir! Excerpts from a critical report on the Pro ASWJ-LeJ tilt of the judiciary:

“In that context, it is very surprising that one of the Supreme Court judges who released Malik Ishaq on bail last week scolded the prosecution and said the case was weak. The same judge, Justice Asif Saeed Khosa, was part of a Lahore Hight Court bench that had asked the police to close down cases of hate speech and incitement to violence, against Jamaatud Dawa chief Hafiz Saeed. The bench would simply not accept that Jamaatud Dawa was another name for Lashkar-e-Taiba, because the new name was not present on a certain list.

Malik Ishaq praised the Supreme Court after his release and said justice had been done. And that is ironic. Why do these people refer to the modern secular notions of law and justice when they do not believe in them? Because that is what gives them a decisive advantage. They have access to multiple epistemic devices. They can identify and exploit weak spots in our legal structure from outside, while simultaneously carrying out practices that are only justified in their own context. And that is why they are winning.

The state and its judiciary, on the other hand, insist on upholding the singular letter of law. They believe that is justice. But justice must question itself. Why should we abide by laws when dealing with people who simply do not believe in those laws? Why should we allow them the privileges of our legal system when they are fighting to replace it with their own?” Lashkar-e-Jhangvi and the “lack of evidence”

Shia Genocide will continue as long as boastful Deobandi terrorist masterminds like Malik Ishaq are freed from the corrupt and compromised judiciary which is championed by the likes of Asma Jahangir.

After the clear bias and prejudice of this judiciary, why are “activists” like Asma Jahangir continuing to advocate for this. Why are they opposing the military courts whose initiation has finally seen justice being meted out to unrepentant mass murdering terrorists!

This judiciary was empowered when “human rights activists” like Asma Jahangir marched along with Jamaat Islami, ASWJ-LeJ/Al Qaeda (Sipah Sahaba) and other (fake) civil society types in the ISI-Nawaz Sharif backed lawyers movement.

“During the rally, an activist from the Jamaat-e-Islami (JI), Tariq Dar, was seen holding a placard stating ‘United States of Al Qaeda God willing very soon’. Dar told Daily Times that he was hopeful that the US would be converted to an Al Qaeda state soon.”

The results of this movement lead to a judiciay that continued to cow-tow to the establishment in the Memogate case.  This same judiciary released terrorists like Malik Ishaq, vice-president of the ASWJ-LeJ who publicly boasted his mass murdering of Shias – evidence that was not considered worthy the Supreme Court.  The same Supreme Court, which still includes judges like Justice Asif Khosa and Justice Jawad S. Khawaja, got up to receive this terrorist in court and overturned a prior conviction against him.

“Terrorism does not disappear with revenge tactics but through making justice and equality before law a reality,” she added.”

So, as per Asma Jahangir, the victims of Deobandi terrorist groups like ASWJ-LeJ should continue to be released and/or broken out of jails instead of being punished for their crimes against humanity – a punishment that is casually dismissed by Asma Jehangir as “revenge tactics”!

This coming from someone like Asma Jahangir who has not said anything of note against her client, PM Nawaz Sharif whose government conducted a massacre of Sunni Barelvis at Model Town. The same Asma Jahangir remains silent on the open alliance between her client PM Nawaz Sharif and Deobandi terrorist groups like ASWJ-LeJ that incite and conduct Shia Genocide in Pakistan.

ISLAMABAD: The Pakistan Muslim League-Nawaz (PML-N) received a vote of confidence from some unlikely allies, as the proscribed Ahle Sunnat Wal Jamaat (ASWJ) – formerly known as the Sipah-i-Sahaba Pakistan (SSP) – rallied in support of the ruling party after Friday prayers.

The national consensus has finally started to change against the terrorism inflicted by Deobandi groups like ASWJ-LeJ, Taliban, Jundullah and Ahrar. However, there are still those prominent lawyers who want to thwart this consensus by opposing the military courts that have been temporarily set up to do the task which the pro-Taliban judiciary has failed to do.

The Tentacles between PM Nawaz Sharif, the Judiciary, its apologists like Asma, media and the beneficiaries like JI and ASWJ-LeJ

The first lawyers movement achieved two wine bottles and a few samosas. It also lead to accomplishments like the release of ASWJ-LeJ Vice President Malik Ishaq and as well as immunity from corruption charges for the son of the notorious former Chief Justice inspite of volumes of glaring evidence against him.

After obfuscating and misrepresenting Shia Genocide and equating the victims of Deobandi terrorism with their perpetrators, human rights activists like Asma Jehangir are lining up to thwart the very courts that aim to take a serious action against the ASWJ-LeJ mass murderers who perpetrated another act of terrorism against Shias today.

Four reported killed in blast at Shikarpur… by dawn-news