Why has the geopolitical analyst Rusty Walker been silent on the massacre in Pakistan of 135 innocent children? 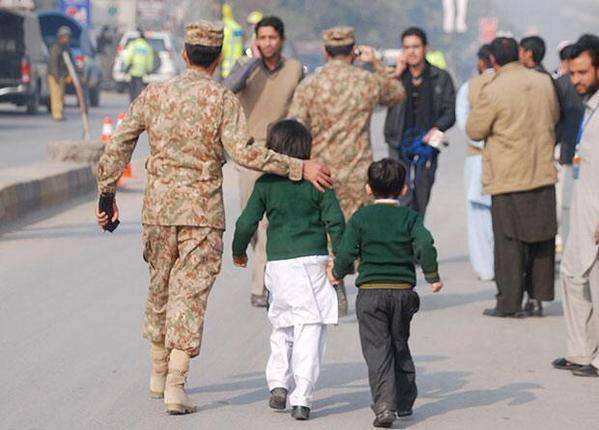 The REASON for my silence follows: No more patience for inaction & this is nothing new!

While it is publicized as the most horrific act of terrorism in Pakistan’s history, it really isn’t- tragic as it is, it is on a par with the on-going, and largely ignored, genocide of innocent Shia in the same region, suicide bombers, and murder and beheadings of men, women and children in the tribal areas since 2002; by the same people, with the same ideology!

Reason for my silence: Where was this outrage before!? Pakistanis are horrified…finally? When I have been writing of such things for 5+ years in my case, much longer by my colleagues?

Pakistani terrorists lamely attempted to distance themselves from this (With the exception of TTP who claim responsibility), the extremist group leaders tried to condemn the killing f children – that is: Deobandi Wafa ul Madaris, ASWJ, LeT, al Qaeda, and ISIS (related to the Khawarij group)- groups that routinely train children in Madrassas to wear suicide vests to blow themselves up along with innocent men, women, and CHIDREN!.

Insincere spin-statement issued from terrorist organizations in Pakistan:
We “condemn all terrorists, of all sects, whether religious or non-religious, Taliban or non-Taliban.”

What? Really???? There is only one reason Jihadists are trying to distance themselves from the TTP massacre at Peshawar: They’re frightened. They’ve gone too far this time; they got our attention, but by the horror of murdering children, some of whom were Army children, they have the negative attention and fury of the Pakistan military:

Let’s analyze their statement:
1. “Condemn all terrorists!” ALL of you ARE terrorists that are claiming to distance yourself from the TTP-Khawarij ! The Deobandi Salafist extremist Sunni & Khawarij groups that are condemning Peshawar children massacre have perpetrated the exact same carnage over the last decade.

2. “All sects?” The ONLY sect is Extremist Deobandi Wahhabi/Salafist Sunni. No other sects!
[The Kharijites (including TTP and ISIS) are not mainstream Sunni, but hold a radical Islamic approach to Takfir, pronouncing other Muslims as apostates to be killed].

3. “Whether religious or non-religious” They are ALL religious!

4. “Taliban or non-Taliban? They ALL are ideologically aligned with Taliban:
“Good Taliban” that is, Taliban from Afghanistan who attacks U.S. and Afghans, not Pakistanis; “Bad Taliban” (TTP), that is, attacks its own (TTP claimed responsibility of school children murders, because Pak Army dared to invade no-man’s land of Federal lawless northern region where Jihadists are protected). Those who try to distance themselves from this also kill, tortured and beheaded the anti-Jihadist tribal elders of the past, the Pashtun Jirga and tribal land leaders, and Shia. Ideologically the terrorists are identical: Taliban, Haqqani Network, al Qaeda, ASWJ, LeT, and ISIS.

All Islamist terrorists share this: Saudi-funded Madrassas that are still not shut down by Pakistan or Saudi authorities: who teach small boys a Jihadist Quran, to be Takfiri (Judging who is impure), trained to be suicide bombers that kill men, women and CHILDREN; Behead Kafirs (apostates) and let their children play with the heads in Iraq-ISIS.

ALL are radical Sunnis;
ALL kill Shia, moderate Sunnis, Christians, Jews, Hindus, Sufis;
ALL kill women & CHILDREN, and have for decades!

So, we read that this massacre has brought outrage to the general population? What took you so LONG!?
The Pak government: True, that the PPP did nothing to stop Shia genocide or change the Blasphemy Laws, while those that attempted to, Salmaan Taseer and  Shahbaz Bhatti were assassinated, the Pak former Chief Justice Iftikhar Chaudhry subsequently set the confessed murderer free – he left in a parade of rose petals!

The Pakistan elected party, PML-N has blood on its hands. Nawaz Sharif (PML-N) and brother, have bargained with terrorists and Saudis over money, and TTP for protection; Prime Minister Sharif has been pushing back on the new Pakistan Army General Raheel Sharif’s sincere insistence on taking the fight into Waziristan, FATA and KP.

The previous General Kayani sustained status quo of “Strategic Depth” and the ISI- Pak security apparatus hid Bin Laden; Charming and handsome, Imran Khan (PTI) meanwhile charms CNN, Americans, and Pakistanis while urging negotiation with Taliban- so does former Secretary of State Hilary Clinton, current Secretary of State John Kerry, and the Jinnah Report – my warning to them: you cannot negotiate with terrorists; they read that as weakness.

All the above agree that the universally hated Taliban should be bargained with (The Afghans themselves, hate the Taliban, and were trained by Americans to withstand the Taliban when they attempt to invade over the Durand Line to Kubal to Kandahar, in the absence of US troops) – but, the U.S. and Pakistan administration, PML-N, Jinnah Institute report all agree that the Taliban should be appeased, and would play a role in the new Afghanistan. Do we learn nothing from history?.

I was recently asked by Americans what is “Strategic Depth?” This subterfuge was started during Zia’s evil tenure; the Pakistan military protect LeT, Haqqani Network, LeJ ASWJ/SSP, all ISI funded terrorists on Pakistani soil. Why? Because this protection allows them to bomb Mumbai, raid Kashmir, infiltrate India causing mayhem, but the Pakistan Army can appear blameless. Strategic Depth is considered the buffer force creating a buffer zone in Afghanistan affording the advantage over India’s designs on Afghanistan; a device for Taliban to invade Afghanistan, but the “Deep State” as it is called does the dirty work, funded by elements within ISI Pakistan’s duplicitous security agency, and PAC Military are afforded plausible deniability. This is Pakistan’s “Frankenstein” (First coined by Benazir Bhutto, in her book, Reconciliation) – protected Jihadists to ensure Deep State into India and Afghanistan.

It would have been cynical at the time of the incident to write about it when such atrocities have been occurring in Pakistan for so long. Where has the outrage been from the past? Equal horrors have been on-going while only LUBP, Jihad Watch, Shia sites, and Dawn, and a few others, (including my friend, Ali Chishti of Friday Times, who has been unfairly maligned for interviewing terrorists – in my opinion, that’s what reporters do- ask the source what they think!)

I have been reporting on these atrocities for five years! The establishment press in Pakistan spins it all, just as this self-protective statement from Jihadists is meaningless in its self-serving spin: “[We] condemn all terrorists, of all sects, whether religious or non-religious, Taliban or non-Taliban.”
My answer to that obsequious statement? “Then, you condemn yourselves!”

And, in Pakistan the U.S. is still considered responsible for all that is wrong with Pakistan. Is there no Pakistani self-responsibility for its own problems? For our part, I would agree with many US military analysts that the U.S. foreign policy for the last two U.S. presidential administrations was a lesson in how not to conduct a short war on terrorism. Invasion of Iraq was under misinformation with no exit plan, and left the vacuum in our hasty departure that was filled with ISIS. The effort against al Qaeda in Afghanistan should not have taken a decade. Not because of our capable commanders on the ground, but decisions in Washington to conduct “shock and awe” tactics, more like a conventional war, in an asymmetrical environment of counter-insurgency- and general ignorance of presidents and cabinet on South Asia and the Middle East was exacerbated by Arab advisors in Washington that were, and are, Wahhabi-Sunnis (including CAIR); even Syrian rebel forces being infiltrated by Salafists was either missed, or ignored, and contributed to ISIS expansion. Hopefully we can learn by past mistakes. Having said that, this is a Pakistani-made crisis.

This is why I didn’t write about Peshawar. It is nothing new. One final insult:
In Muzaffarabad, the Punjab Governor Sarwar recently blamed all of this- all terrorism on the U.N., the U.S. and 9/11.

He blamed the ‘double standards’ of the international community. He blames the UN for the unresolved Kashmir and Palestine issues. That is why he says we have the Peshawar massacre and global terrorism. This is typical of the lack of accountability that obfuscates realities on the ground.

It is time for concerted Pakistani deadly action against harbored Taliban and Jihadist associate combatants, the new narrative to include ridding Zia-constitutional legacies, pluralism, protection of minorities, government accountability, trials for corruption, public-funded education for male and females, government funding and sharing natural resources revenue with Baluchistan, law enforcement trained and pay increases, sent to FATA, including Gilgit-Baltistan; KP, and a military who works with Parliament; genuine outreach to India for mutual benefit of commerce.

And celebrate your heroes. What do Pakistanis gain from vilifying Pakistani heroes like Malala Yousafzai , as the UN and world recognizes her as an icon of peace? Pakistan needs to honor its heroes as role models, such as Dr. Pervez Hoodhoy, Abdul Sattar Edhi, and even Shoaib Akhtar  and Reema Khan, among others. There are many Pakistani figures that the world needs to hear about. Why keep vilifying the Bhuttos, inaccurately as a dynasty? No Politician is flawless, and Quaid-i-Azam Jinnah, Sir Muhammad Iqbal, Zulfir Bhutto, Benazir Bhutto should remain icons of the Pakistani development.

Pakistan is ready – if it can destroy the internal Jihadists, bring economic security and education to Northern regions, rid bad elements within its security forces, and military in order – to join the global economic community.

6 responses to “Why has the geopolitical analyst Rusty Walker been silent on the massacre in Pakistan of 135 innocent children?”