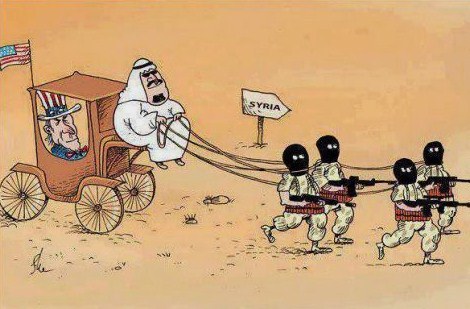 The Saudi regime has imprisoned its moderate Islamists and allowed its radicals to cause mayhem in the Levant. It is uncertain whether those radicals are indirectly or directly sponsored by the Saudi regime. But it is certain that the regime shares their hatred of Shia Muslims, the Assad and Maliki regimes, Lebanon’s Hezbollah and Iran. While the Saudi regime cannot realistically bomb its rivals, jihadis are performing the role with precision.

A recent report argues that ISIS or the ‘Islamic State’ is largely a self-funded movement, drawing on a wide range of sources. The Saudi regime is not one of them. The report debunks ex-Iraqi Prime Minister Nuri al-Maliki’s accusations that his country faces the threat of terrorists funded directly by Saudi Arabia. Yet the prominence of Saudis in its rank and file is yet to be explained. Notwithstanding the Saudi offensive to absolve itself from any connection with Islamic State, these groups have demonstrated a certain affinity not only with the Saudi religious tradition but also its political history.

From Beirut to Baghdad, Saudi radicals who have joined ISIS and other similar militia are determined to eliminate their rivals and enemies, and finally establish their dream Islamic state. Evidently those Saudi jihadis now fighting for Islamic State are not satisfied with their own allegedly Islamic state, known as the Kingdom of Saudi Arabia. They are the generation of the 1990s—young, connected, unruly and full of zeal in support of an Ummah, narrowly defined as a Sunni community that excludes all others in the world of Islam. This is not surprising: they have grown up in Saudi Arabia, whose Wahhabi form of Islam crushes religious diversity.

Yet the exodus of young Saudis to neighbouring Arab countries must not be seen through a purely religious lens. Above all, it is a product of Saudi policies that use religion in the service of the state. The Saudi state itself was produced by an earlier version of the conflicts we are witnessing today in the Levant. As early as 1912 the founder of the Saudi kingdom, Ibn Saud, created tribal militia called the Ikhwan and indoctrinated its fighters in the art of killing Muslims who objected to his own political authority on the ground that they were kafir—infidels. He enlisted the tribal youth of the Arabian Peninsula in a jihad against all those who resisted his hegemony. His first state was called Dawlat Najd and Hijaz, as it incorporated Central Arabia and the Western province where the holy cities of Mecca and Madina are located. The founder assumed several titles, including Emir, Imam and Sultan, before he settled on the title of King, at the suggestion of the British colonial power.

The creation of modern Saudi Arabia is unique in the Arab world as it was a jihadi project from the very beginning. Unlike in other Arab states where the youth are introduced to a mythologized nationalist narrative about history, Saudi youth are indoctrinated into the unique jihadi narrative of the state as one that came into being as a result of the efforts of a pious leader who energised his people, saved them from blasphemy and eradicated un-Islamic beliefs and practices.

The Saudi fighters of the twenties had a special dislike for statues and graves. They arrived in Mecca and Medina in the mid-1920s and immediately went on a rampage, searching for signs of blasphemy. They destroyed graves and imposed on the population strict codes of conduct. No woman was to be seen in the streets and no tobacco was to be consumed in public. They immediately marked the beginning of their rule by implementing a series of measures, from rounding people up to perform prayers to monitoring public morality.

Importantly, the Saudi state created by the military might of the Ikhwan had no respect for borders, and it was a matter of time before it clashed with nearby British colonies. Southern Iraq was appealing to Saudi fighters because it gave them the opportunity of plunder and dying for their faith in jihad against the infidel Shia population. Iraq’s holy cities, mainly Najaf and Karbala, promised double gains: riches in this world and credit in the afterlife, as the Saudis’ God promised rewards for those who purify Islam from the blasphemy of rejectionist Shia. Their King Ibn Saud, under pressure from Britain, had to restrain them and convince them that the expansionist project must be put on hold.

But has it really been put on hold? Ibn Saud had to tame the Ikhwan’s zeal and regain the respect of his British sponsors. Beheading the rebel leaders solved the problem for a while. But the impulse to die for faith remained and found opportunities later in other parts of the world. There was no shortage of destinations, approved and sanctioned by the Saudi regime. Afghanistan was the culmination of several decades of indoctrination into the merits of dying to save other Muslims.

The above is the story of modern Saudi Arabia, not the Islamic State. But can we see parallels here? Surely the battleground of contemporary Saudis is no longer the vast desert lands and holy cities of Arabia but has moved further north to more fertile lands.

The participation of young Saudis in the Syrian and Iraqi conflicts is neither surprising nor an historical accident. Syria and Iraq are perhaps the most ethnically and religiously diverse in the whole Arab world. Saudi jihadis have been desperate to repeat the purification strategies that their ancestors applied in the Arabian Peninsula. They know that jihad at home is severely punished but abroad it is a matter of choice.

The Saudi regime may have succeeded in convincing the world that it is a moderate force, seeking peace and curbing the zeal of its own jihadis. Reports may absolve it from any direct responsibility for the emergence of ISIS or other groups. But it remains accused simply because its history, foundation and ideology bear such resemblance to the contemporary situation, and its citizens are playing such a prominent role in it.

Perhaps the West has no choice but to believe in the power of the almighty Saudi regime to control the flow of its own jihadis abroad. Britain itself fell under the spell of the founder of the kingdom and believed him when he promised to punish those radicals of the 1920s. Today, many Western powers perhaps feel that if jihadism is inevitable, it is better that it is performed far away from them, and even better if it can be used to serve Western interests, exactly as it did in Afghanistan.

The Saudi regime has not abandoned the use of religion in the pursuit of political projects. It has grown accustomed to this instrumentalisation, which may eventually bring about its demise. The regime may not have realised yet that Islam is a double-edged sword. It has used Islam against its rivals, initially the locals who resisted Saudi hegemony, and later its Arab neighbours. It has created the conditions that breed jihadis who are indoctrinated in a historical narrative about purifying Islam and freeing Muslims from the grip of blasphemous rulers and practices. Some of those jihadis are convinced that the realm their fathers created has become distorted in recent times, deviating from the path of the early founders. They will no doubt return to haunt the Saudi regime that is beginning to put itself on alert in fear of such a nightmare.

However, the imminent return of jihadis to Saudi Arabia is currently delayed for two reasons. First, the prospect of American intervention mitigates against them rushing home to practice what they have been taught to do. The reluctance of the US administration to be involved in Syria and Iraq through direct military intervention is not enough to assure jihadis that the same restraint will be exercised in Saudi Arabia. Saudi Arabia remains more vital than Syria or even Iraq for the United States and the rest of the world. Second, as long as jihadis find ways of getting funds and volunteers from Saudi Arabia, they may not be in a hurry to undermine this source.

Despite Saudi noises about the alleged threat of jihadis returning home, this is not an imminent danger in the near future. Perhaps there is a secret gentlemen’s agreement between the least gentlemanly of partners, who have several shared interests and a near identical ideological outlook. So, can we conclude that the Saudi regime is serious about fighting radical jihadis?