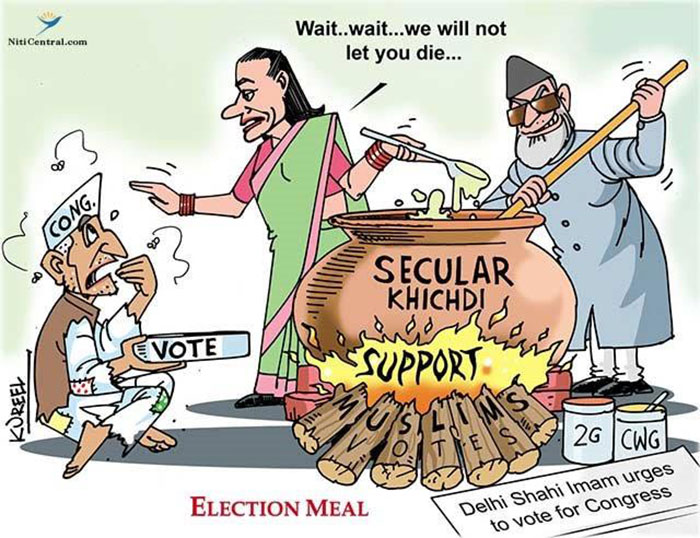 The Shahi Imam of Delhi’s Jama Masjid, Syed Ahmed Bukhari has sent invitations for the ‘dastarbandi’ of his successor Naib Imam to Pakistan Prime Minister Nawaz Sharif, Congress president Sonia Gandhi, vice-president Rahul Gandhi among others but has declined to send the invite to Prime Minister Narendra Modi.

Dastardandi or the anointment ceremony of the Naib or vice Imam of the Masjid, happens to be a tradition in the Bukhari family. According to a report, about 1,000 Muslim religious scholars from all over the world are being invited. During the week following the ceremony, the Bukhari family will host at least three dinners – one for the Ulemas, another for about 3,000 namazis in Delhi, and on November 29 for top diplomats from Muslim countries and politicians from India and abroad.

Interestingly, Pakistan is a country which carries out Shia genocide and UN data reveals –

Deobandi militants, originally trained by Saudi-CIA-ISI… due to their inherent sectarian (differences), violent tendencies, have killed more than 22,000 Shia Muslims, 10,000 Barelvi Muslims and hundreds of Ahmadis, Christians, Hindus and other persecuted communities in Pakistan. (Since 1963 till July 2012)

When Imam Bukhari says that he cannot relate with Narendra Modi and does not accept him as the Prime Minister of India while he goes ahead to invite the Prime Minister of Pakistan, does he realise what his action implies? He is inviting the Head of State of a nation where ethnic cleansing in the name Islam has become an every-day affair. This nation is not only instrumental in killing innocent civilians on Indian side because of repeated cross-border violations but also is a mute spectator if not a supporter of Muslim genocide in its own sovereign space. There has never been any protest or Government initiative to curb these pogroms.

Bukhari, of course, feels that Sharif is a caretaker of Muslim interests not only in his nation, where he has failed miserably, probably also in India. It only reflects that he lives in a ‘Fool’s Paradise’ and hurts the sentiments of millions of Muslims in this country who consider themselves Indians and have accepted Narendra Modi as their Prime Minister.

It is people like him, who create a divide among communities and thrive on their insecurities. Bukhari must realise that it is this attitude that makes him a hated person among many Indians. His separate and biased foreign policy may hurt some people. He must not forget that his guest list has people who have hurt India’s national interest by presiding over mega scams. Does he forget the fact that Sonia Gandhi was heading the UPA when 4,000 Muslims were killed in Assam and about 2 lakh families were displaced? He can relate to her since alignment with Gandhi clan has helped him reap rich benefits. Between Sonia Gandhi, Nawaz Sharif and Shahi Imam, the common chord seems to be use Islam for personal gains.

If such are the people he relates to, then surely there are enough reasons for us to not take him seriously.