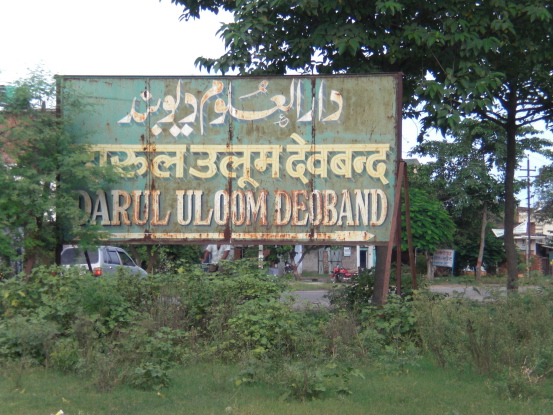 Pakistan is a strange country. Thanks to generous Saudi funding to Deobandi and Salafi Wahhabi madrassas and groups, and the instiutional support of these hate ideologies by Pakistan’s jihadists military establishment, now the poison of Salafi and Deobandi sectarian hate has spread throughout the fabric of Pakistani society. Most Sunni Muslim in Pakistan remain unaware of their Sunni Sufi and Hanafi roots; many of them cannot distinguish between peaceful Sunni (Hanafi or Sufi) ideology and the hateful, intolerant Deobandism and Salafism. It is therefore no surprise that not only Deobandi or Salafi madrassa educated robots but also most of the seemingly modern educated and progressive Pakistanis hold extremely intolerant views about Sunni Sufis, Barelvis, Shias, Ahmadis, Christians, Jew etc due to their subtle radicalization by the Salafi Deobandi ideology.

Similar sectarian intolernace has also crept in a certian section of secularists, leftists and Marxists of Pakistan. Such species may be called Marxist Deobandis or secular sectarians.

At times, such people may pose as atheists or even Shia-friendly but often they resort to false Sunni-Shia and Saudi-Iran binaries to obfuscate or even justify Deobandi (TTP-ASWJ) terrorism against both Sunni Sufis and Shias in Pakistan. Inspired by Deobandi Marxists such as Tariq Ali, such Pakistani Deobandi Marxists, are also seen justifying the atrocities of the Taliban, Sipah-e-Sahaba (ASWJ) and other Deobandi fascists in the name of resistance against imperialism. Two such budding Deobandi bigots in Pakistani leftist circles in Karachi are Fahad Rizwan and Faraz Qureshi. There are many similar examples.

Schoalrs and bloggers need to seriously analyse the role of Deobandi political parties in the Subcontinent before Partition. Such analysis will expose the historical retrogressive and sectarian, intolerant role of Deobandi political parties played during the decline period of Mughal empire and colonial period. Such scholarship will also highlight that the so called reformism of Deobandi reformers was actually very sectarian and exclusive in nature which excluded Sufi Sunnis and Shia Muslims from Indian Muslim community, and under influence of this exclusion we see very hateful attitude of Deobandi reformers toward Shia and Sufi Sunnis and their rituals, beliefs and that culture which was constructed after long interaction among different cultural waves of various etnic, religious, lingual communities.

In particular, the Daruloom Deoband, the Deobandi cult’s seminal madrassa, actively expanded and spread the retrogressive, anti progressive and anti enlightenment ideas and attitudes among Sunni Muslims and tried to stop them from getting new sciences including social sciences and opposed colorful culture of united India. In other words, Deobandis use the ‘reform of Islam’ banner to block the modernization and reformation of Indian Muslims.

Actually theological, political and social ideas of Deobandi reformers were derived from the Movement of Jihad of Syed Ahmad Barelvi (this Salafi Wahhabi jihadist has nothing to do with the peaceful Sunni Sufi Barelvi movement of Ahmed Raza Khan) and Shah Ismail; these two persons had accepted the Wahabbi theology although they didn’t fully and explicitly quit the Sunni Hanafi school of thought and practics in Fiqh.

One can see the primary signs of this Wahabbi trend in Shah Abdulaziz (son of Shah Waliullah) who in his book (Tohfa Al Shia) rejects some Sunni Sufi rituals and traditions calling them Biddat and Shirk. (Biddat and Shirk are the two words which are key signs of Salafism, Wahhabism and Deobandism.)

Shah Ishaque is another son of Shah Waliullah who had migrated to Hijaz where he came fully under the influence of Wahabbis and he wrote against Sunni Sufi traditions of Chaleeswan, Rasm-e-Qul, Istaghash, Urs etc and we find many Sunni clerics in that period who wrote against Wahabbi tendency of Shah Ishaque and Shah Abdulaziz, like Qazi Faizullah Badayouni who was very prominent Sunni religious scholar and Mujahid of war of 1857 against East India Company.

Then we see a fully distorted version of Sunni theology, anti Sufi Sunni and anti-Shia ideologies in Syed Ahmad Barelvi (Wahhabi) and Shah Ismail who was grandson of Shah Walliullah. Actually, Shah Ismail adopted all hatemongering ideas of Muhammad bin Abdul Wahab in his book Power of Faith (Taqweeat al Iman). Founders of the Daruloom Deoband actually never rejected such hateful, sectarian and violent ideas and tendencies of the Movement of Jihad of Shah Ismail and Syed Ahmad Shaheed Barelvi and gave space to those anti Sufi Sunni ideas and tendency and never excluded or rejected such persons who held such hateful ideas and ran semi-Wahhabi movements.

Also, some Deobandi Marxists and secular sectarians of Pakistan dishonestly refer to Dr Ali Shariati’s movement for reforms in Shia Islam and compare it with the Deobandi movement of reforms in Sunnis of Subcontinent. This is historically and ideologically wrong. Dr Ali Sharaiti is a very different reformist from Shia school of thought who never supported any type of puritanism like Wahabbist tendency in Deobandi and Sunnis. He opposed those capitalists, elites and poweful persons from Shia clergy who were distorting concept of justice and other social aspects of socialogy of Islam in the name of Shi’ism. He never rejected the cultural diversity and sacredness of Islam. In contrast, we can clearly see a trend of rejection of colorful diversity of Muslim culture in puritanism of Wahabbi and Deobandi clergy. Sharaiti was not a sectarian, narrow minded reformer like Shah Ismail and other his followers in Deobandi clergy.

Maulana Ubaidullah Sindhi and other who adopted way and path of Sindhi actually adopted modern anti colonial, anti imperialist and anti capitalists ideas under the influence of Marxist movement. Ideas of Ubaidullah Sindhi changed when he was forced to leave Afghanistan and go to Russia where he very first time studied the Marxist ideology and system and met comrade Lenin and other ideologues of Marxism.

We shall find very crucial and basic changes in Sindhi’s ideas against the nature of Biritish Imperialism and colonialism and ways to resist against this. Many people who had migrated under influence of Deobandi clergy like Ubaidullah Sindhi, Dada Comrade Fareozuldin Mansour, Qurban Allahi and many others who managed to go to USSR quit the old retrogressive, anti enlightenment and sectarian version of Deobandi anti imperialist tendency. Instead, they adopted modern, scientific, progressive pro Marxists anti imperialist and anti colonial nationalist apporach and tried to reconcile between Islam and modern, progressive Marxist and nationalist ideas. Here we see administration of Daruloom Deoband after Mufti Mehmoud-ul-Hassan in leadership of Hussain Ahmad Madani who although adopted nationalist, anti colonial politics and started to cooperate with All India Congress but their attitude toward Sufi Sunnis and Shia Muslims was never tolerant and as scular as it was towards Hindus. One possible explanation is the Deoband’s pragmatic and cunning nature of subservience to the powerful Hindu majority while being strict on dismpowered communities such as Sunni Sufis, Shias, Ahmadis etc. Deobandi political religious leaders had very friendly and good relations with Hindu Muhasabhai leaders and remained very liberal and secular toward Seths and industrialists from the Hindu community. However, Deobandis did not show such secular and liberal attitude toward Sufi Sunnis and Shias. In fact, we can see many local and national Deobandi leaders (Mehmood-ul-Hasan, Hussain Ahmed Madani) propagating sectarian propaganda against Shia and Sufi Sunnis. Deobandi seminaries in those days were spreading hate against other sects and involved in violence against processions of Muharram and Milad in Utter Pardesh where they had more influence. Of course in Pakistan where Deobandis were able to enhance their influence thanks to support by Saudi Arabia and Jihadist military establishment, they were able to carry out their real agenda by violent massacres of Sunni Sufis, Shia Muslims and other persecuted communities.

2. Deobandi ideologues like Obaidullah Sindhi adopted the posture of Marxism but never really ditched/abandoned the bigotry, hatred and violence against Sunni Barelvis, Sufis and Shias needs a separate post altogether. Obaidullah Sindhi and Mufti Mehmood (father of Fazlur Rehman of JUI-F) are the favourites of Deobandi apologists. Its as though their quotes on Marx absolve them of their responsibility to put an end or at least explicitly reject and question the virulent anti-Shia, anti-Sunni Barelvi tendencies amongst top Deobandi clerics.

3. Another tendency of these Deobandi apologists is to attack Sunni Barelvi, Sufi and Shia rituals which are based on hudreds of years old rich South Asian, Central Asian, West Asian, North African and East African culture. Here we can refer to the lost Shafi culture of South East Asian countries of Indonesia and Malaysia as those that are opposed by the Deobandi-Salafi complex. Specifically in South Asia, Deobandis who pretend to be liberal while doing flattering of the Saudi- or US- or ISI-friendly fake liberals, are deeply inimical to Shia and Sunni Sufi and Hindu traditions of Azadari and Sunni Barelvi and Shia traditions of Maulood, Naat and Qawwali.

4. Deobandis’ token friendship with Hindus on few selective occasions is hypocritical and also driven by their power-centric nature. In India, they align themselves with any powerful party be it Congress or BJP. In Pakistan, they align themselves with Pakistan military establishment. In both India and Pakistan, they remain heavily funded by and aligned with Saudi Salafi donors and hate clerics. How can Deobandi be friends with Hindus while eulogizing mass murderers and rapists of Hindus, Sunnis and Shias like Ahmed Shah Durrani Abdali, Mohammad Bin Qasim, Aurangzeb Alamgir, Ludhianvi, Jhangvi etc?