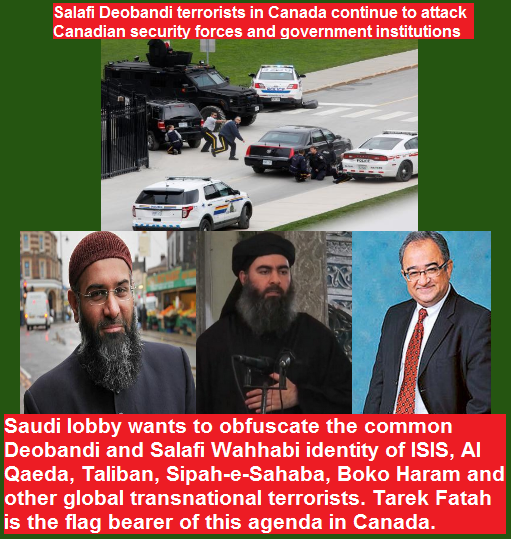 Interfaith Unity against Terrorism (IFUT) condemns the cowardly attacks by Salafi Wahhabi and Deobandi militants of the (so called) Islamic State (ISIS/ISIL) on the Canadian parliament and security forces.

According to media reports (22 October 2014), a radical Salafi Muslim convert launched terror attack in Canada killing one soldier after his passport was confiscated as he tried to leave and join ISIS. Martin Couture-Rouleau, 25, a Salafi Wahhabi terrorist ran over two Canadian soldiers, killing one. Investigators say he had become radicalized by Deobandi and Salafic clerics, and was feared to be en route to become a jihadi in Turkey. Warrant Officer Patrice Vincent succumbed to his injuries.

IFUT advises Canadian government and all other Western governments to closely monitor Deobandi and Salafi Wahhabi clerics and activists in their countries and stop them from brainwashing and radicalizing innocent Sunni Muslims into the Deobandi and Salafi Wahhabi cannonfodder of the ISIS, Al Qaeda, Sipah-e-Sahaba (ASWJ), Boko Haram, Al Shabab, and Taliban (TTP). These various names and outfits globally represent the common intolerant, puritanical, violent ideology that is manifested in Wahhabism and Deobandism.

IFUT also notes with concern that within Western countries, a few activists are discreetly working on a Saudi-inspired agenda to obfuscate or hide the commmon Salafi Wahhabi and Deobandi identity of terrorits.

For example we refer to Tarek Fatah’s recent article (Torontor Sun, 21 October 2014) on ISIS recruits attacking the Canadian police. In that article, Mr Fatah, a former Saudi resident of Pakistani origin and Salafi Deobandi leanings, completely wipes out the specific Salafist identity of the attackers. In all his articles on extremism, Tarek Fatah uses vague, misleading and sweeping terminologies like “Sunni”, “Jihadist”, and “Islamist”. Not once has a used the correct nomenclature of Wahhabi/Salafi/Deobandi to describe ISIS extremists!

Is this man working on a Saudi agenda? In his entire article, he has not once mentioned how Turkey is facilitating ISIS terrorists from Europe and North America into Iraq and Syria! He has conveniently not written anything about the Saudi, Qatari and UAE funds that are flowing into Canadian Salafi and Deobandi mosques including those frequented by the Somali communities in Toronto?

While he poses as a frined of Jews, his dubious background and shifting positions are archived here: https://lubpak.com/archives/319673

After taking part in the right-wing PNA movement sponsored by Pakistani Deobandi dictator General Zia ul Haq, Tarek Fatah spent over a decade in Saudi Arabia and this has clearly influenced his problematic discourse in extremism. In talking about extremism, not once has Tarek Fatah identified the common Salafi/Wahabi and Deobandi orientation of the mosques, madrasses and extremists who are now attacking the Canadian police.

Tarek Fatah claims to be a friend of the Kurds and Baloch. The Kurds are predominantly Sunni and are one of the main victims of ISIS in both Iraq and Syria. Still Tarek Fatah does not bother to explain this clear difference between the Salafist-Deobandi ISIS and their Sunni (Hanafi, Shafi’i) and Sunni Sufi victims.

Lumping victims (Sunni Sufis, Shias, Sunni Kurds) and their perpetrators (Deobandis and Salafi Wahhabis) in the same category of Islamists is offensive to the victims and a free pass to the Salafi/Wahabi and Deobandi terrorists about whom Tarek Fatah is never specific. Tarek Fatah holds the Islamic Sharia law as the root-cause of terrorism hiding that many peaceful groups of Muslims eg Sunni Sufis, Shias, Ahmadis too believe in Sharia law, which is completely different from violent, Jihadist Sharia interpretation of Deobandis and Salafi Wahhabis. Thus, it is neither Islam, nor Sunnism, nor Sharia, it is the Deobandi and Salafi Wahhabi takfiri ideology which is violent in its very nature.

For his deliberate obfuscation on this issue, Tarek Fatah shares the responsibility of today’s sad attack in Ottawa. If Tarek Fatah had used his considerable media clout to guide the Canadian authorities on monitoring the specific Deobandi and Wahabi mosques in Canada, this situation might have been averted.