We hope you use today’s Jalsa to make a fresh start for PPP. The country needs PPP but unfortunately, under the current leadership, the PPP has withered and declined to the point of becoming irrelevant to the country’s future. It has compromised on nearly all its core principles and is no longer the party for the oppressed and the targeted. It has been hijacked by the elites who are dragging it as far away from the masses as possible.

Since PPP is fast being reduced to just a trip down memory lane, here is a clip (“Bhutto dry naray wajan gae”) of when the party actually electrified the masses and was relevant to the issues

The present leadership, the PPP has failed to stand up on core issues. While PAT and PTI are now taking ownership of issues like inflation, security, extremism and corruption, PPP has been reduced to the B-Team of Nawaz Sharif.

The PPP must make a fresh start and once again commit itself to the people of Pakistan. It must break free from the shackles of elitist opportunists who have no roots in the masses but whose hold in the current PPP is deeply damaging to the very soul of the party. We at LUBP will continue to engage with PPP and do our best to hold it up to the ideals that were envisioned by Shaheed Zulfiqar Ali Bhutto sahib and Shaheed Bibi.

The right to be critical of the party leadership is the right given to jiyalas by the founders of the party. Our criticism is not the smutty, slanderous rubbish of insensitive drawing room chatterers (some of whom have weaselled their way into the party now!) but on real concerns.

One of our main criticisms for the PPP’s current performance is ironically also based on one of our main concerns for your safety – i.e., the threat to you from Takfiri Deobandi terrorist groups like ASWJ-LeJ.  On this concern, we have written in detail on numerous occasions including our  recent A Jiyala’s lament: Current PPP leaders ignoring Party activists call for much needed reforms

We have taken up this issue on several occasions with you; both from our blog as well as on social media but with very disappointing results. Groups like ASWJ-LeJ and other similar groups have created havoc in Sindh and made life a living hell for Sunni Barelvis, Sufis, Shias, Hindus and Ahmadis in Sindh.  All these communities are being targeted by ASWJ whose Sindh leader, Aurangzeb Farooqi roams freely to incite violence against everyone while enjoying the protection of the Sindh police!

On this issue, the PPP Sindh government’s role has been abysmal.  Similarly, the PPP’s current stance in protecting the rigged, corrupt, Pro Taliban regime of Nawaz Sharif is proving to be a death knell for the party in Punjab.  Please do away with the rhetoric that the PPP is “saving the system of democracy”

A rigged mandate is the very antithesis of Democracy – a dictum that every PPP supporter knows well having suffering from various rigged elections that were stolen by Nawaz Sharif and his party of thugs!

While appreciating your stance on Imran Khan’s problematic role as a Taliban apologist, we request you to take his movement seriously.  On the other hand, Dr. Tahir ul Qadri should have had the full support of the PPP to support his grievances regarding the Model Town Massacre by the PML N regime! At a time when the Takfiri Deobandi lobby is intent on ripping the social fabric of Pakistan, Dr. Tahir ul Qadri must be commended for uniting Sunni Barelvis, Sufis, Shias, Christians and Sikhs on one platform.

Pakistan’s great human rights activist, Julius Salik who was with the PPP is now with standing with PAT.  The supporters of PAT are the same moderate, working class Pakistani men and women who represent what is the soul of Pakistan. They are the profile of the typical PPP supporter from the times of Shaheed Mohtarma and many of whom feel that the PPP has abandoned them in the Punjab. 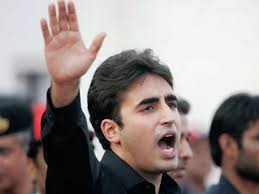 Pakistan needs more than just plain rhetoric. It needs solutions to very real problems. The PPP can still ditch the opportunists and the elites who have hijacked the party.  The PPP can still own up to the real issues facing Pakistan and act as a real opposition to the thuggish PML N regime instead of acting as appeasers.

Asif Ali Zardari’s journey to Raiwand as the start of PPP’s journey towards political oblivion!

The word “reconciliation” can no longer be misused to describe the PPP’s capitulation on nearly every issue that is important to the masses.  On the double digit inflation that has worsened since the PML N took over the PPP did nothing. The PPP kicked out the only PPP activist, Faisal Raza Abidi who took on the corrupt and mafia thugs known as the Judiciary.  He exposed them for their corruption, nepotism and their soft corner for Taliban and LeJ extremists. His gift was being fired by you on Twitter.

Under Zardari, the PPP has capitulated to the PML N and MQM on nearly everyone of their demands. The PML N did its best to derail the PPP and often joined hands with former COAS General Kiyani and former CJP, PCO Chaudhary.  Memogate, Raymond Davis, Kerry Lugar bill are just some of the few examples where PML N and MQM betrayed the PPP.

Speaking of betrayals, why is the party still allowing Aitzaz Ahsan and Sherry Rehman to hold centre stage in decision making. Both betrayed PPP for Chaudhary Iftikhar and GEO and for their own narrow selfish interests.  Then there is Khurshid Shah whose public blunders from supporting the water car hoax to his soft corner for ASWJ-LeJ have made him a liability in the eyes of PPP supporters. A more pathetic and spineless chief minister than Qaim Ali Shah would be hard to find – unless of course one compares him to former CM Balochistan Raisani.

It is time that Bilawal ditches the tired hackneyed cliches and references to past sacrifices.  Today, PPP and Pakistan do not need martyrs – they need living leaders who are connected to the masses and who take ownership of real issues. Bilawal needs to end PPP’s policy of supporting PML N under the incredulous pretext of protecting a (rigged) system.  PPP needs to regain the ground it has lost to Imran Khan in the last couple of months.  For that, Bilawal needs to start addressing the concerns of not just Sindh, but all of Pakistan.  In order for that to happen, he need to sideline the opportunist and elitist lobbies, hacks and civil society chatterers  who include some of the most abusive detractors of ZAB and BB.

The current PPP leadership is taking the grievances of ZAB loyalists lightly.  These are the same loyalists who have won multiple elections for the PPP in Punjab and KPK but whose voice has been dimmed in favour of Ziaists like Wattoo and non-electibles like Raza Rabbani.

We wish him well and pray for his life even as we uphold our right to be critical of the recent problematic discourse of the PPP leadership, including Bilawal.  The Sindh Government may yet collect many people to attend the rally as well as many heart broken loyalists who still want to give PPP a chance.  This opportunity must not be frittered. 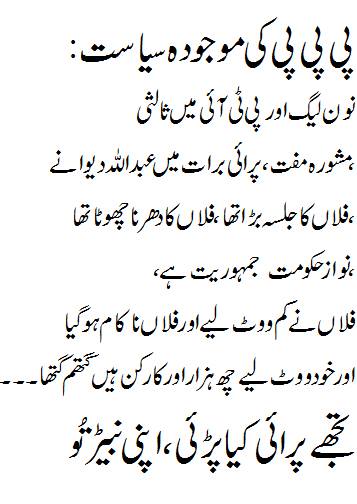