While some people are seemingly very upset on the criticism of workers and sympathizers of PPP regarding the policies and actions of Co- Chairman Asif Ali Zardari, they need to realize that such voices are being raised by those who are friends of PPP not foes.  At a time when these very questions are being raised in far harsher and unsympathetic tones by critics, the silence and appeasement is not the answer.  Those supporters of PPP who are under the impression that the political tussle between PML N and PTI will somehow benefit the electoral prospects of the PPP are living in a delusion or purposely peddling misinformation.

The PPP is an ideologically based party whose lifeblood is the jiyala.

In the New PPP under Zardari-Bilawal, another breed of elites with weak to no previous party affiliation are being stuffed and the Jiyalas who bled and faced imprisonment for defending the party are being sidelined. 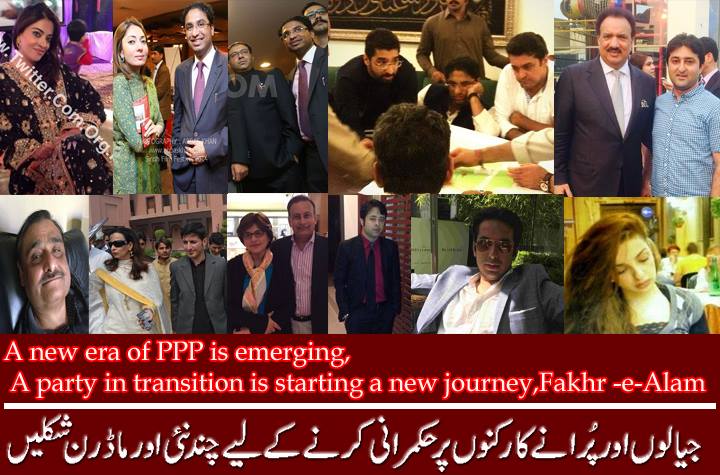 The empowerment to speak out is the legacy of Shaheed Zulfiqar Ali Bhutto but these days, it seems that the current leadership wants to surround itself with yes men and flatterers!

Why has the PPP Government given award to former information minister of Zia -ul-Haq which was a posthumous award received by his daughter?

Why has Asif Ali Zardari ignored those PPP workers who have the experience of journalism, public relations as well as coordinating with the Press, while appointing those like Faisal Mir with dubious PPP credentials as the spokesperson of Bilawal House, Lahore.  Faisal is the brother of Hamid Mir and he never condemned his brother when he was running media campaign against the former PPP Federal government at GEO, JANG Group.

Why did he offered Eid prayers behind the cleric who had denied to offer the funeral prayer of Shaheed Salman Taseer.  This same cleric then held a renewal of faith ceremony for those clerics who had joined the Rasam-e- Qul post funeral ceremony of Salman Taseer.
Will Asif Ali Zardari now visit the grave of General Zia ul Haq like his current boss Nawaz Sharif did for decades after the Dictator and his coterie were blown up in the heavens.

It seems that the favourite of anti-Bhutto civil society elites, Sherry Rehman is acting as the representative of the Takfiri Deobandi lobby of the military establishment.  The Jinnah Institute founded by Ms. Rehman is just a glossy cover for the Jihadi lobby of the military establishment and whose all employees are being paid through ISI-backed Tameer bank of her husband.  This is the lobby that has recommended the name of Faisal Mir for the position of Bilawal House spokesperson; therby bypassing more qualified PPP activists in favour of someone who has no record as a PPP worker!

After betraying her party in favour of the Pro Taliban GEO group and Pro LeJ PCO Chaudhary, Sherry Rehman was rehabilitated within the party when she replaced Hussain Haqqani as Pakistan’s ambassador to the United States.   Hussain Haqqani, along with former Prime Minister Gillani were dragged through a media trial orchestrated by the so-called anti-establishment GEO when they were viewed as a threat to the Jihadi interests of former COAS General Kiyani.

Sherry Rehman was the person whose replacement of Hussain Haqqani as ambassador of Pakistan for U.S.A  was seen as a move by the military establishment.  Sherry had helped to regain control of the Pakistani embassy in Washington by the military establishment just as Hina Rabbani Khar had helped the  military to regain the control of the Foreign Office of Pakistan.

Hamid Mir was included among those journalists and anchors who were propagating against PPP and spreading maliciously false rumors against Hussain Haqqani and blaming him for allegedly selling out Pakistan’s interests to the US.

Sherry is also the de facto political trainer of Bilawal Bhutto Zardari.  This is the Sherry Rehman who placed her media interests ahead of the interests of the PPP.  At the height of a vicious media trial conducted by Geo to reinstate the corrupt, Pro Taliban PCO Chaudhary, Sherry betrayed the PPP and surrendered her information mininstry post to cross over to the other side.  The pressure to reinstate the obscurantist former chief Justice also had the backing of the ISI and then COAS General Kiyani.

PPP’s tall claims under Bilawal to combat the Taliban ring hollow in the light of the fact that the Sindh Government is providing police squads to Aurangzeb Farooqi and other  takfiri Deobandi leaders of ASWJ-LeJ.  This inspite of the fact that the ASWJ-LeJ continues their  hate campaign against Sunni Barelvis, Sufis, Shias and Hindus.  For public evidence on Aurangzeb Farooqi’s hate campaign refer to Tweet this Bilawal: Shia genocide continues unabated in PPP-governed Sindh

When senior PPP leader, Sharjeel Memon, the information minister of Sindh Government was contacted and asked about why the Sindh Government has not enforced the existing ban on ASWJ and placed its leadership for their incitement to violence the response was typical.

“We cannot afford agitation of ASWJ .”

The PPP leadership’s failure to stop the ongoing genocide of Sunnis, Sufis and Shias while the cancers of ASWJ metastasizes in interior Sindh is a glaring indictment.  A Former federal minister and member of the CEC of Party who had promised to raise this issue in the meeting of the PPP Central Executive Committee for them to solve this matter, also backed out after apologizing.

Recently a fellow jiyala met Bilawal Bhutto Zardari at Bilawal House in Lahore and he asked the Chairman to take notice of the V.I.P protocol to the ASWJ-LeJ Sindh chief, Aurganzeb Farooqi.  The request was in vain.  This in spite o the fact of ASWJ-LeJ having also threatened Bilawal!

If the PPP leadership cannot face the pressure of the ASWJ and the Takfiri lobby within the  military establishment,

If the PPP leaders cannot raise their voice against the unholy nexus between the Saudis and their PMLN – Takfiri Deobandi proxies,

If the PPP cannot resist the infiltration of Ziaists within its own party (Wattoo) choosing instead surrender or “reconcile” with all this menace then how can they claim to be following the path of the martyred Bhuttos ?

The PPP opposition’s spinelessness against the PML N government’s rampant corruption has caused further disillusionment. The PPP has been mute on the plan of sale of common shares of OGCDL by PMLN Government and it is the PTI KPK Govt who went to court to stop this sale. As a party that has a legacy of supporting the masses, the PPP has not launched any movement against the brutal price hike and exponential rise in the price of utilities like electricity and gas.  The PML N government is cheating the citizens of Pakistan when billing for electricity while the PPP stands mute.  How can the leadership claim that the party’s politics is “progressive , democratic and pro people”!

The workers of Pakistan Peoples Party, its jiyalas are feeling that the leadership of the party is sacrificing the interests of the people and the workers to enjoy the perks of government and facilitate the  corrupt elite classes of Pakistan.  The jiyalas are asking Zardari to call a general workers convention at the division level.  Zardari needs to  listen to their voices for reforms in the Party, including elections in the party at all levels and the revival of socialist and leftist agenda.

What is wrong in these demands and why are people who enjoyed power and are still enjoying the favors of Zardari and still occupying  key positions in the party seem upset with these demands for urgent reforms?

Why are some of them on the path of character assassinations of critics and spreading conspiracy theories to deflect attention away from the demand for reforms?

PPP jiyalas and sympathizers of have valid grievances and without addressing these it is impossible to revive the party and mobilize the working class, peasantry and middle class who form the party’s base.