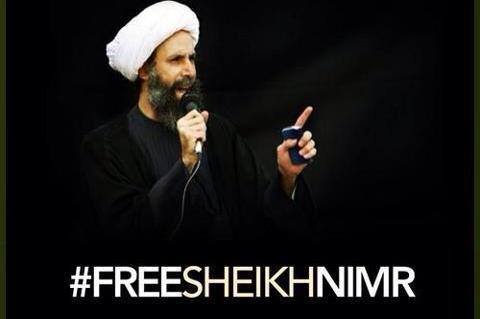 Sheikh Nimr is being executed for peacefully speaking and demanding the rights of the people of the Eastern Province. The world community and in particular, the United States Administration is under pressure from powerful stealthy lobbies to ignore the human rights violations occurring in the Wahhabi theocracy Kingdom of Saudi Arabia. Specifically, the US must stop the execution of Sheikh Nimr and send a message to our allies that we expect better from them – otherwise our international credibility will be dented. Saudi prosecutors want to literally crucify Sheikh Nimr – how can anyone of conscience accept this.

The charges against Sheikh Nimr are trumped up and are clearly contradicted by his unambiguous and public stance of eschewing violence. In his interviews to the media (http://www.bbc.com/news/world-middle-east-29627766), Sheikh Nimr has been very clear

“the weapon of the word is stronger than bullets”

Conscientious citizens living in the 21st century, who reject the atrocious notion that dissident voices need to be executed, need to pressure the Saudi government to immediately release rights activist and dissident scholar, Sheikh Nimr. Saudi Arabia happens to be one of our major and oldest allies but unfortunately its human rights record dents our own credibility by association. Specifically, the manner of the trial against Sheikh Nimr after he was shot, arrested and held without charges for nearly a year are a shocking reminder of the sad state of human rights in the Wahabi Kingdom of Saudi Arabia.

Sheikh Nimr’s trial was a farce and the charges against him contradicted his own clear and unambiguous public statements that called for peaceful protests.

If we fail to put pressure on our own allies to stop their repressive and violent tactics against dissent, we erode our own credibility within the world community. Sheikh Nimr has become a symbol of peaceful protest within the very country we hold as one of our closest allies. He needs your pressure to save his life and send a powerful message to the world community that the “The Weapon of the word is strong than bullets”