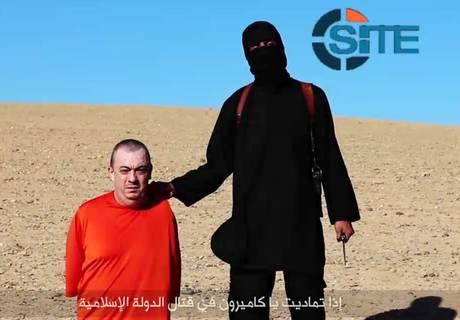 The executions of Western journalists and aid workers continues unabated. Violence against Sufi and orthodox Sunni Shia, Christian and minorities is attributed to a the Deobandi/Salafi ideology. This is not to say that there is something wrong with a child born into a Salafi or Deobandi household. In fact vast majority of the Salafis and Deobandis are peaceful. At the same time we have to call a spade a spade, not only almost all terrorism is Deobandi or Salafi related, appeal to non Muslim converts is also evident. There will always be a small minority of people that this Khawariji Takfirism effects but they almost always be Deoabandi, Salafi or Saudi related.

It is an ideology of Salafi Deoabandi Takfirism that is creating this violence, billions of dollars of funding by Saudi Arabia to Western mosques has converted a majority of Sunni Muslims to Wahhabism and Takfirism in the West.

Henning, 47, a taxi driver from Salford, a town near Manchester, was seized while taking part in an aid convoy near Syria’s border with Turkey. Islamic State militants threatened to kill Henning in a video that showed the killing of another Briton, aid worker David Haines.

The Islamic State, also known as ISIS, emerged from obscurity this year to capture vast swaths of territory in Syria and Iraq, countries plagued by instability and war. Espousing a severe interpretation of Sunni Islam, the extremists have beheaded two American journalists, James Foley and Steven Sotloff, in apparent retaliation for U.S.-led airstrikes in the region. Islamic State militants have also threatened to kill an Iraqi journalist who refused to cooperate with the organization. 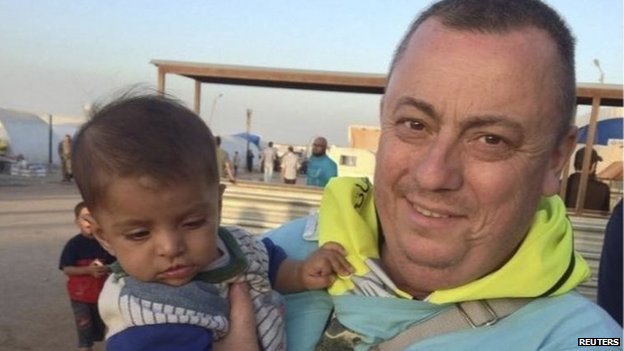 The video released on Friday is yet to be verified, but it appears to show Mr Henning kneeling beside a militant, who is dressed in black, in a desert setting.

The footage ends with an IS fighter threatening a man they identify as Mr Kassig.

In a statement, Mr Kassig’s family said he had converted to Islam and referred to him as Abdul Rahman Kassig.

CAMBRIDGE, England — IN the last few years, there has been a dramatic rise of a seemingly new type of polity: the Islamic rebel state. Boko Haram in West Africa, the Shabab in East Africa, the Islamic Emirate in the Caucasus and, of course, the Islamic State in the Middle East, known as ISIS, or ISIL — these movements not only call for holy war against the West, but also use their resources to build theocracies.

Though in some respects unprecedented, these groups also have much in common with the Islamic revivalist movements of the 18th century, such as the Wahhabis on the Arabian Peninsula and the great jihadist states of the 19th century. They waged jihad against non-Muslim powers, and at the same time sought to radically transform their own societies.

One of the first groups to engage in anticolonial jihad and state-building was the fighters led by Abd al-Qadir, who challenged the French imperial invasion of North Africa in the 1830s and 1840s. Qadir declared himself “commander of the faithful” — the title of a caliph — and founded an Islamic state in western Algeria, with a capital in Mascara, a regular army and an administration that enforced Shariah law and provided some public services. The state was never stable, nor did it ever encompass a clearly defined territory; it was eventually destroyed by the French.

Equally short lived was the Mahdist state in Sudan, lasting from the early 1880s to the late 1890s. Led by the self-proclaimed Mahdi (“redeemer”) Muhammad Ahmad, the movement called for jihad against their Egyptian-Ottoman rulers and their British overlords, and it established state structures, including a telegraph network, weapon factories and a propaganda apparatus. The rebels banned smoking, alcohol and dancing and persecuted religious minorities.

Patrick Cockburn writes in his book The Jihadis Return:

The key decisions that enabled al-Qa‘ida to survive, and later to expand, were made in the hours immediately after 9/11. Almost every significant element in the project to crash planes into the Twin Towers and other iconic American buildings led back to Saudi Arabia. Bin Laden was a member of the Saudi elite, and his father had been a close associate of the Saudi monarch. Citing a CIA report from 2002, the official 9/11 report says that al-Qa‘ida relied for its financing on “a variety of donors and fundraisers, primarily in the Gulf countries and particularly in Saudi Arabia.” The report’s investigators repeatedly found their access limited or denied when seeking information in Saudi Arabia. Yet President George W. Bush apparently never even considered holding the Saudis responsible for what happened. An exit of senior Saudis, including bin Laden relatives, from the US was facilitated by the US government in the days after 9/11. Most significant, twenty-eight pages of the 9/11 Commission Report about the relationship between the attackers and Saudi Arabia were cut and never published, despite a promise by President Obama to do so, on the grounds of national security.

In 2009, eight years after 9/11, a cable from the US Secretary of State, Hillary Clinton, revealed by WikiLeaks, complained that donors in Saudi Arabia constituted the most significant source of funding to Sunni terrorist groups world- wide. But despite this private admission, the US and Western Europeans continued to remain indifferent to Saudi preachers whose message, spread to millions by satellite TV, YouTube, and Twitter, called for the killing of the Shia as heretics. These calls came as al-Qa‘ida bombs were slaughtering

people in Shia neighborhoods in Iraq. A sub-headline in another State Department cable in the same year reads: “Saudi Arabia: Anti-Shi’ism As Foreign Policy?” Now, five years later, Saudi-supported groups have a record of extreme sectarianism against non-Sunni Muslims.

The importance of Saudi Arabia in the rise and return of al- Qa‘ida is often misunderstood and understated. Saudi Arabia is influential because its oil and vast wealth make it powerful in the Middle East and beyond. But it is not financial resources alone that make it such an important player. Another factor is its propagating of Wahhabism, the fundamentalist 18th-century version of Islam that imposes sharia law, relegates women to second class citizens, and regards Shia and Sufi Muslims as her- etics and apostates to be persecuted along with Christians and Jews. This religious intolerance and political authoritarianism, which in its readiness to use violence has many similarities with European fascism in the 1930s, is getting worse rather than better. A Saudi who set up a liberal website on which cler- ics could be criticized was recently sentenced to a thousand lashes and seven years in prison.
The ideology of al-Qa‘ida and ISIS draws a great deal from Wahhabism. Critics of this new trend in Islam from elsewhere in the Muslim world do not survive long; they are forced to flee or murdered. Denouncing jihadi leaders in Kabul in 2003, an Afghan editor described them as “holy fascists” who were misusing Islam as “an instrument to take over power.” Unsurprisingly, he was accused of insulting Islam and had to leave the country.
A striking development in the Islamic world in recent decades is the way in which Wahhabism is taking over mainstream Sunni Islam. In one country after another Saudi Arabia is putting up the money for the training of preachers and the building of mosques. A result of this is the spread of sectarian strife between Sunni and Shia. The latter find themselves targeted with unprecedented viciousness from Tunisia to Indonesia. Such sectarianism is not confined to country villages outside Aleppo or in the Punjab; it is poisoning relations between the two sects in every Islamic group- ing. A Muslim friend in London told me: “Go through the address books of any Sunni or Shia in Britain and you will find very few names belonging to people outside their own community.”