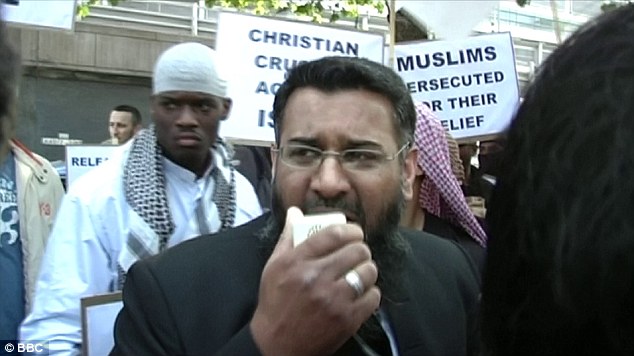 It was tragic to see what happened in Woolwich but I was not surprised. I have been speaking about the danger which this radical ideology exported by Saudi Arabia poses to all of us for long. The reaction of Muslim community was largely meaningless and the way the UK deals with these radicals is inept. And finally what the Saudis are doing in the ghettoes of British Islam, I regard that as potentially lethal for the future of the UK and Muslim community in specific.

I am tired of the old chiche which has become standard response to all Wahabi/Salafi terrorism – “Islam means peace” and that’s it. After every incident of terrorism, you will get the response that these terrorists have no religion. Well, I disagree. When a killer butchers someone with chants of Allah-o-Akbar and proclaims he is doing it for Islam, there is no reason to believe he has no religion. What about the Taliban who released video messages threatening liberal political parties, then killed 100 of them – did they have no religion? Of course they had – they follow a specific ideological interpretation of religion and act for it.

If Islam means peace and terrorism is no space in Islam, then we need to consider why so many Islamist terrorists are doing it. Of course there is something wrong somewhere which need to be addressed. The standard Muslim response is defeatist and escapist at best. By saying this terrorist is not from amongst us, they are just running away from the problem. Just disowning the terrorist will not solve the problem. They will keep on coming. This escapist trend actually avoids the much needed soul searching which Muslim communities have to do.

This video, which is released in reponse to the Woolwoich attack is a classic example of what is wrong with Muslim reaction to terrorism. The speakers are simply denouncing the individual, just disowning him and declaring him not from them. But is that enough? Why not address the issue, why not address the ideology which causes this?

Saudi regime spends billions of pounds each year promoting Wahhabism which is a fundamentalist extremist movement. Much of it funds children’s education in British faith schools and mosques. I am surprised why Muslim parents are not worried? Why is the UK not worried and have given them space?

Dr Denis MacEoin, an Islamic studies expert at Newcastle with a team of researchers uncovered literature being fed by KSA to mosques, madressahs and Islamic centres in Britain. It included leaflets, DVDs and journals with statements that promoted Islam supremacist tendencies, hate speech and violence against LGBT community and non Muslims saying they should be burnt, stoned or thrown from mountains or tall buildings. It also said those who changed their religion or committed adultery should be killed. It is targeted at younger British Muslims who do not speak Arabic or Urdu. It also encourages British Muslims to segregate themselves from non-Muslims.

Channel 4 has also uncovered material in mosques filled with hate-filled invective against Christians and Jews. They condemned democracy and called for jihad. They presented women as intellectually deficient and in need of beating when they transgressed Islamic dress codes. They said that children over the age of 10 should be hit if they did not pray. Again the main mosque chosen for exposure was influenced and funded from Saudi Arabia.

A few years earlier one Sheikh Abdullah el-Faisal, a Jamaican convert who had studied at a Saudi university, was caught promoting violence against non Muslims – he urged his audience to kill Jews, Hindus and Americans. Among his followers was Germaine Lindsay, one of the 7/7 bombers who killed 52 people and injured 700 others on the London transport system in 2005.

Take the case of terrorism in Pakistan. This dissertion by University of Pennsylvania uncovers some important data in relation to the ideology behind terrorism. The chart below shows clearly over 90% of all terrorists captured in Pakistan follow a shade of the Saudi influenced literalist and raidcal interpretation of Islam.

(Note: Deobandis and Ahl-e-Hadith make up nearly 20% of Pakistan’s population)

Also of importance is the chart below, from BBC Media Service, again showing almost all terrorist organisations operating in Pakistan follow the same ideology.

Why young Muslims Britons are falling to Wahhabism/Salafi ideology?

The young Muslim Britons face an identity crisis. They fail to connect with the identity of their parents which could be sub-continent, Asian or ME identity. They find it tribal or too backward. They don’t find themselves fitting well enough into the British identity, neither they approve of the imported Imams unaware of local issues. At the same time, they are raised in a schooling environment and culture where they are encouraged to question and think for themselves. Wahabism comes as an alternative to them. Accessible to them through modern well equipped mosques, English speaking young Imams, through internet and catchy pamphlets, booklets and magazines. It becomes very attractive choice – it gives them sense of empowerment, a new identity and a utopia of Muslim golden age and caliphate, a world ruled by Muslims.

Are Anjem Chaudry and likes not dangerous?

When we react to groups like Jamaat, Muslim Brotherhood, HuT and AJ, we are told its just speech and not dangerous unless they act. This is wrong. Islamism has a continuum – some groups are active on violence and bloodshed like the Takfiri Lashkar-e-Jhangvi and Tehrik Taliban Pakistan, but others doing work which enables it like political and social support, creating a suitable environment and all. Sipah Sahaba is political front which sends its members to national and provincial assembles in Pakistan. Groups like Muslim Brotherhood, Jamaat-e-Islami and people like Anjem Chaudry are marketing champions of this radical ideology. They make it popular, acceptable and digestable for the people by creating an environment suitable for it.

Anjem Chaudry has been calling for violence openly but no action has been taken. He openly calls to overthrow the secular democracy in Britain which makes this country what it is. He makes fun of hardowrking people of this country and convenitently claims benefits off our taxes and then wages a war against us. We have seen case of Sheik Abdullah al Faisal, one of his followers was a 7/7 bomber. They are given free air time but the media is not interested to listen to those who object to this radical ideology.

I would expect the British authorities to not just hunt down the terrorists, but also to fight the cancer of this radical Saudi literalist ideology that is the root of this terrorism.  As a British citizen, I expect my safety and protection guaranteed by the state. I do not feel safe, I want the state to take these Islamofascists heads on add stop cosying upto them and Arab states. Muslims who see the West as the enemy and seek its destruction have become even more strong by the lack of resolve.

The support of UK and other countries in the West/EU for the Saudi Arabia is tragic and destructing for world peace. The nerve centre of Islamist terrorism is not Afghanistan, Pakistan, Iraq, Iran, Libya – it is Saudi Arabia. The root of all Islamist terrorism lie in Salafi Wahabi ideology, as clear from data and evidence we have shown above. The Wiki leaks also made it clear how Saudi Arabia has been found funding radical terrorist producing factories in South Punjab in Pakistan involved in killing minorities.

Think of a Islamist terror group which wants to kill non Muslims, enforce Sharia, abhors democracy and wants a return to Caliphate. Taliban, HuT, LeJ, FSA, ALQ, you name it – they are all followers of Salafi Wahabi ideology. They are funded by KSA, Qatar and UAE Arab states. Saudi Arabia’s radicals have turned Britain into a laboratory of radical Islam and it is high time the state does its job and protects the future of this beautiful country, its pluralist culture and tolerant society. The states in the West need to stop cosying upto Arab states like Saudi Arabia, UAE and Qatar which are exporting radical Wahabi ideology and funding terrorism across the world.

Doctrine of armed jihad or doctrine of Saudi Wahhabi Caliphate?

Woolwich Beheading: Educating the West about the Wahhabi brand of terror